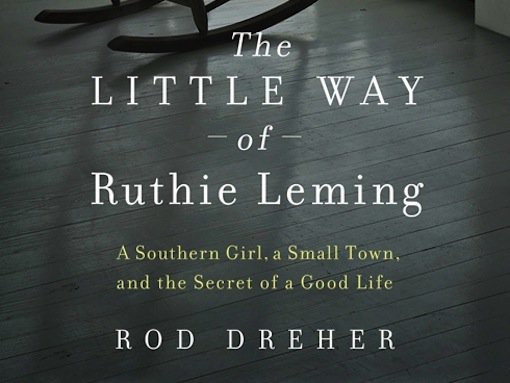 Beautifully written and unforgettably told, The Little Way of Ruthie Leming is a memoir about Rod Dreher’s younger sister and the extraordinary impact she had upon her family and community. Subtitled “A Southern Girl, a Small Town, and the Secret of a Good Life,” Dreher’s tour de force delivers on every level.

The book opens with scenes from Dreher’s childhood in St. Francisville, Louisiana, a small town in West Feliciana Parish (pop. 1700). Here we meet his parents, Ray and Dorothy (“Paw” and “Mam”), Ruthie, two special aunts, and an assortment of colorful townspeople as charming as those in the fictional Mayberry, even if a little more earthy and complicated. Dreher captures the sights, sounds, and rhythms of the town with the skill of an exquisite painter.

Shy and bookish, Rod never took to certain staples of Southern living, like sports, hunting, and fishing. To make matters worse, he became the target of bullies, a fact which haunted his childhood, but which he kept mostly to himself. As the years passed, and his sense of isolation deepened”even amid a loving family”he promised to strike out on his own the first chance he got. After college, Rod left Louisiana to begin a high-profile career in journalism on the East Coast.

Ruthie chose to stay in St. Francisville, close to her parents. She married her high school sweetheart, Mike Leming (a fireman and soldier), became a popular teacher, and gave birth to three wonderful daughters. Despite never having been a smoker, Ruthie was diagnosed at the age of forty with a virulent form of lung cancer. If statistics were any guide, she had no more than a few months to live.

The news shook the Drehers to their very foundations, especially Rod, who now felt remorseful about his infrequent visits back home, and for having kept his distance from his family. Living in Philadelphia with his family, he immediately returned to Louisiana, seeking to make amends, and support his sister.

What Dreher experienced during that emotion-filled journey changed his life. The town he had once so longed to escape turned out to be an incredibly giving community. After news of Ruthie’s illness spread, the town rallied around her:

The news hit the West Feliciana community like a cyclone. As the day wore on a hundred or more friends mobbed the hospital. Some offered to move in with the Lemings to care for the children . . . . John Bickham [a family friend] told Paw that he would sell everything he had to pay for Ruthie’s medical bills if it came to that . . . . All over town people prepared food and took it by the Leming house.

The town held a benefit concert to support Ruthie and her family financially, and countless prayers were said. St. Francisville’s primary riches were spiritual.

All this worked on Rod. He couldn’t imagine it happening in many other places he lived, and he concluded it must have something to do with his hometown’s communal happiness, and the love which is created by close-knit friends. For all its idiosyncrasies and hardships, St. Francisville was a place where many people are born and die in the same place, alongside the same folks they grew up with. Those kind of social bonds, broad and deep, are passed on by generations and cannot easily be recreated in new or fast-paced milieus.

Rod also learned things about his sister he never knew: how much she anchored her family; how much she meant to her students and fellow teachers; how much she reached out to those less fortunate than her”even after her illness. Many of her students had come from broken homes, and some were so unruly that many had given up on them. When she was asked how she put up with them, and how she could be so patient trying to reform them, her answer was always the same: “I love those kids, and maybe they can change.”

But for many of us, “that’s the hardest thing in the world,” writes Rod. Most people find it difficult to love anybody, without conditions, but “Ruthie found everyone lovable.” Like so many other Christians whose good deeds are known only to God and those closest to them, Ruthie Leming was a seemingly ordinary person who did extraordinary things.

If the title of Dreher’s memoir sounds familiar to Catholic readers, it is for good reason. As Rod explained to National Review :

It’s a reference to St. Thérèse of Lisieux. My sister was not a Catholic”she was a Methodist”but St. Thérèse was a nun who died in the late nineteenth century, died young, in the convent, of tuberculosis. After she died, her fellow nuns found her spiritual writings and published them.

Among the things she became known for is what she called “the little way.” Her idea was that it’s not given to everybody to live a “big” life full of great deeds on the public stage, but if we live faithfully our small lives, and love the people we are given to love, with all our heart, and love God, then we can achieve great things.

After her autobiography was published, noted Dreher, “St. Thérèse went on to become one of the most popular saints of the twentieth century, and in fact Pope John Paul named her a Doctor of the Church. So it just goes to show the power of a small life lived well.”

Never have I read anything as moving as Dreher’s description of what a family undergoes when one of its members is stricken with a grave disease. From the moment of her diagnosis, to the breaking of the news to her frightened children, to her eventual death in the arms of her indomitable and loving husband nineteen months later (she outlived expectations by over a year), the reader suffers every step with Rod, and Ruthie’s family.

Dreher’s memoir is about more than life and death ; it is also about the American dream. That phrase is expansive and open-ended, as perhaps it should be, given the at times seemingly boundless possibilities our country offers. But somewhere along the way, the “American dream” became reduced to two things: money and success. There is nothing wrong with either, but, as Dreher communicates so well, if the two become the object of our obsession, to the exclusion of everything else, we end haunted by emptiness. Dreher’s delicate treatment of our national dream gives the book a claim to being a modern American classic.

Because of what he witnessed after his sister’s death, Dreher realized he had no roots where he lived”no one to care for him and his family should they ever face a similar crisis”and something his mother said, after Ruthie’s diagnosis, kept resonating:

We were surrounded by so much love . . . It was the most horrible day of our lives, but we could feel the love of all these good people. There was nothing we could have wanted or needed that wasn’t done before we asked. And they were there. Do you know what that means? People were there .

Dreher and his family subsequently moved to their true home, St. Francisville. It might not be the right move for everyone”some people don’t come from small towns, and find their support system only in big cities”but it certainly was right for the Drehers.

Dreher still experiences doubts. He worries whether he did everything he could have done for Ruthie, and said everything he should have said. But he acknowledges the countless graces he received during her final illness and, quite unexpectedly, after her death.

Yet Rod need not worry any longer. In paying such loving tribute to his sister, and so memorably honoring faith, family, and community, he has likely made Ruthie Leming very proud of her big brother. We should be, too.