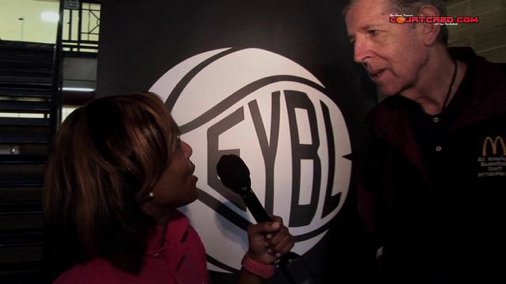 For almost forty years, Tom Konchalski has scoured high school gymnasiums across the East Coast”and sometimes beyond”assessing up-and-coming athletes for his newsletter, High School Basketball Illustrated . Appearing sixteen times a year, it’s read by many of the nation’s top college basketball coaches. What makes it so popular and influential is Konchalski’s uncanny ability to forecast future stars. The list of athletes he has scouted and hailed before they catapulted to fame”including hall of famers like Michael Jordan, and future ones like Kobe Bryant and LeBron James”is extensive.

Konchalski does not have a network of scouts, work on a computer, have a website, use video equipment, own a cell phone, or even own have an answering machine. Instead, he attends each game himself, bringing along his trusted yellow legal pad, taking profuse notes and evaluating ballplayers quietly from the stands. He then returns home to his apartment in Queens, types up his newsletter, runs off hardcopies, stuffs each one into a manila envelope, and mails each packet to his exclusive group of subscribers.

His weekly routine also includes fortifying his Catholic faith, along with spiritual and corporal works of mercy: attending church, praying, offering counsel, visiting the sick, supplying charity, attending funerals, and having Masses said for the departed.

This is his tried-and-trusted modus operandi and he is sticking by it. Now in his sixties, Konchalski has held firm to his no-frills faith, and equally resisted all efforts to expand his business or update it with high-tech communications. “I’m a dinosaur,” he likes to joke.

Although he is shy about public attention, the New York Times , Sports Illustrated , and New York magazine have all done profiles of Konchalski, with the latter calling him “the last great (and good) basketball scout” in an industry too often devoid of integrity. His simple, old-fashioned values are part of his abiding strength.

A lifelong New Yorker, Konchalski grew up in Queens during the ’50s and ’60s”the halcyon days of American Catholicism and New York City sports. He has many fond memories of those times, not least serving as the altar boy for his parish, the Church of the Ascension, and attending basketball games with his father and brother. Gifted with a phenomenal memory, he can recite all the names of the great inner-city ballplayers from that era”Connie Hawkins, Roger Brown, Tony Jackson”describe their moves, and even tell you the dates they performed their most impressive feats.

Konchalski is notoriously difficult to get a hold of, but he graciously accepted my request to interview him. Faith and athletics, Konchalski says, both “encourage discipline, sacrifice, and the pursuit of excellence.” Both draw clear boundaries, and those who act selfishly and transgress settled rules suffer the consequences. And no matter how much the powers that be tinker with rules, he adds, athletics cannot function unless they stick to core principles. “Sports,” he says, “are one of the last bastions of traditional values.”

At their best, they can rescue troubled individuals, and help restructure their lives. “Look at what boxing did for someone like Floyd Patterson . He was a juvenile delinquent and headed in all the wrong directions, until the trainer Cus D’Amato taught him how to box, and become a solid citizen.” Patterson went on to become the heavyweight champion of the world, and a Catholic convert known for his gentle demeanor outside the ring. “A true role model,” says Konchalski.

During his many years of scouting, the one thing Konchalski has learned is how often sports builds character:

When you compete, different parts of your soul are touched”there is something in the center of your being that is stirred. What it does is it trains you, and prepares you for meeting adversity in life . . . . For example, God sends sports to young children as a preparation: it is his gift to them, so they can learn life’s many lessons, in what are painful circumstances, but not overwhelmingly painful.

A boy of seven or eight, Konchalski explains, who plays baseball and loses a championship game, will be very disappointed, but also become strengthened by it. What is more, sports teaches youngsters “how to win graciously, and lose graciously,” and these lessons eventually “play out on much larger stages” in life, “with much greater impact,” when athletes have to deal with real challenges, and even tragedies.

Konchalski was eager to talk about who had inspired him : his parents, many popes and saints, and all the people from the sports world who left unforgettable impressions on him. Two stand out in particular.

The first is Jack Curran , a legendary basketball and baseball coach from Archbishop Molloy High School (Konchalksi’s alma matter), where the two met over fifty years ago, and after which they remained close friends. Curran’s teams won an incredible twenty-two Catholic school New York City championships”five in basketball and seventeen in baseball. Louie Carnesecca, who preceded Curran as basketball coach at Molloy, said that Curran “won everything except World War III.”

Curran also won the hearts of countless friends and fans, who recognized him as a man of “strong Roman Catholic faith” and “generous deeds,” in the words of the New York Times . He was a gentleman on and off the court, and virtually everything he did was first-class. As competitive as he was, he avoided profanity, and in over fifty years of coaching, he was only called for technical fouls four or five times. In 1969, he declined a coveted coaching job at Boston College because his mother was dying, and he needed to care for her.

Before Curran died this past March, Konchalski was in constant contact with him, and recounts how, at the age of eighty-two, afflicted by severe lung and kidney problems, Curran broke his kneecap on the way to church. “Incredibly, he pulled himself to his feet, made certain he attended Mass, and then went to receive medical help.” But Konchalski’s best memory of his friend is what Curran said after someone asked him why he attended Mass at 6:45 a.m. each morning. “I can’t think of a better way to start each day,” he replied.

The second person to have impacted Konchalski’s life through sports is David Moss , a track and basketball star from Georgia, whom he describes as “one of the finest people I ever met.” Moss played in a tournament called the Seamco classic in 1973, where Konchalski scouted him and helped secure his talents for the University of Tennessee, where Moss excelled as a freshman.

At the end of that year, Moss noticed a bruise on his hip, and it wasn’t healing. Tests were taken. It was discovered he had bone cancer, and his entire right leg, from the hip on down, had to be removed. Moss was just eighteen years old. Konchalski became great friends with Moss and his family after that, until his death in 1980. “He was just such a wonderful person,” Konchalski remembers now, with emotion in his voice:

For instance, when he was growing up, there was a kid in David’s class who was a bully, and David would fight him, sticking up for the other kids. Later on, after David learned his former foe had fallen into jail, David didn’t hesitate to visit him”even after he became ill and had his leg removed”because he needed someone . . . .

And they tell the story how, on the way to the hospital, as David was about to have his leg removed, and have his promising athletic career ended forever, all David was concerned about was whether his mother was comfortable in the back seat of the car. That’s the kind of young man he was. He is one of my heroes.

Just as he has been influenced by others, so too has Konchalski elevated many he meets. In a brief but wonderful documentary on his work, he is shown meeting a group of teenagers after an inner-city basketball game he has just scouted. When he finds one of the stars of the game, he immediately reaches over to shake the young man’s hand, pronounces his name”“Davon””and is sure to praise him aloud for his astounding twenty-two rebounds that night.

All the students immediately burst into spontaneous applause, saluting their classmate, ecstatic that a renowned scout has singled him out for praise. Heaven only knows what kind of problems some of them might be going through outside of school, but here, in the sanctuary of sports, was a rare moment of grace, communion, and joy. This is Konchalski’s special ministry.

Noticing that, and having heard so much wisdom from him, I could not resist asking what his “scouting report” was on the current state of the Church, and our new pope. He did not disappoint:

The Catholic Church has to remain staunchly orthodox in doctrine, and at the same time show its human face, as Pope Francis already has”stressing how the Church is concerned with the poor and suffering, so that we can be seen as following the example of Our Lord, and be seen as his servants . . .

We certainly have to atone for our sins, and constantly be open to reforming and improving our Church. At the same time, we don’t do that by ceasing to be Catholic”we do that by being more faithful to our mission, and by becoming more Catholic, not less.

It was now time for my conversation with Konchalski to come to a close, as more scouting assignments (and devotions and acts of kindness) awaited.

In The Joy of Sports , Michael Novak explains why he believes God is a sports fan: “Certainly he is, if he likes to see humans straining to their utmost to be the best he made them, making moments of imperishable beauty. Sports have to be among his glories.” Speaking to Mr. Konchalski, I trust that God is a fan of faithful sports scouts as well.