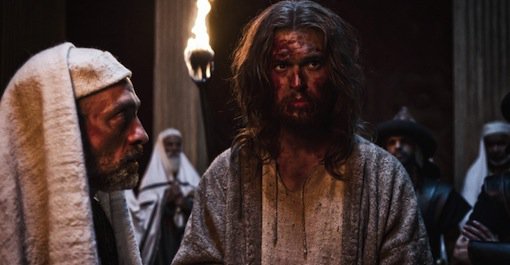 The popularity of the History Channel’s The Bible shows that Americans still yearn for inspiration from the Greatest Story Ever Told. For all of its positive power, however, The Bible may inadvertently perpetuate negative images of Jews and Judaism.

For centuries, dramatic presentations of the biblical narrative were bad news for Jews. Passion plays”often timed to coincide with the Easter-time commemoration of the Crucifixion”not only portrayed Jesus’ Passion on the Cross, but ignited the passions of the crowds who took to the streets during Holy Week to seek revenge upon people whose ancestors Christians were taught were responsible for Jesus’ death. In some cases, fiery preachers further incited the populace with allegations that Jews were killing children and using Christian blood in their Passover matzah. The fatal consequences of these portrayals spilled out over centuries. Christians internalized the charge that Jews caused the death of God and, with it, the lethal teachings of collective guilt of all Jews.

In our time, the calumny still endures. In December 2005, Venezuelan firebrand President Hugo Chávez castigated “some minorities, the descendants of the same ones who crucified Christ, [who] have taken over the wealth of the world.” In a world of skyrocketing anti-Semitism”where even in the United States almost two-thirds of all religion-based hate crimes, according to the FBI, target Jews who amount to less than 2 percent of the population”the way the Crucifixion is depicted in 2013 still stirs concern among Jews.

Mercifully, most Christians today do not believe in collective guilt or condone anti-Semitism. The Vatican’s Nostra Aetate debunked the charge of deicide and turned anti-Semitism into a sin. Protestant groups”conservative and liberal”have forged respectful relationships with Jews and Judaism. A common denominator of Christian response”if there can be such a thing”is that guilt for Jesus’ death is the burden of all sinners, but not of one person or group, especially when Jesus said, “No one takes my life; I lay it down myself” (John 10:18).

When Mel Gibson released The Passion of the Christ in 2004, many Christians were incredulous about Jewish concerns over grotesque depiction of Jews. How, they asked, could anyone not understand that mankind as a whole shared the blame?

Jews were left to wonder, however, whether everyone shared such enlightened positions. Could anyone measure the effect upon young Americans of a subliminal suggestion that Jews are devious Jesus-haters? What about Christian viewers in countries that historically displayed animus to Jews and have hardly purged themselves of the world’s oldest prejudice? What about non-Christian viewers in countries that are fed a constant diet of anti-Semitic invective?

Those questions were never resolved. They merely drifted away . . . until the release of the History Channel series. To be sure, The Bible was clearly free of any intentional toxicity. It pounded into the viewer the covenantal connection between G-d, the Jewish People, and the Land. It did not soft-pedal the Jewishness of great biblical heroes, nor of Jesus himself.

Naturally, Jews were befuddled by some key portrayals that”though faithful to the Christian Gospels”lie outside Jewish memory and Jewish perception of history. Perhaps least understandable to Jews is the presentation of Pontius Pilate as possessing enough conscience to think twice about executing an innocent prisoner. The Pilate known to Jewish and secular history was a soulless tyrant. Philo, one of the few period historians whose words have survived, describes Pilate as guilty of “ briberies, insults, robberies, outrages, wanton injustices, constantly repeated executions without trial, and ceaseless and grievous cruelty. ” Jews are thus especially puzzled that depictions of the Crucifixion story would point to anyone other than the person who wielded all the power and executed people with equanimity.

Still, Jews know that they cannot fault believers for being faithful to their holy texts, even if they would like to see dramatic portrayals (in which there is much latitude in the way a message is presented) show some more insight in regard to their impact on viewers.

Even if the role of Caiaphas and company must remain prominent to be true to the Gospels, how they were presented in this series remains disturbing to many Jews. Simply put, they are the most “Jewish” Jews of the series. Everyone else looks like imports from Texas. Only the Sanhedrin Jews and synagogue officials parade around in Jewish prayer shawls at all times, conveying the subliminal image that the “real””the most religious”Jews were the most diabolically evil opponents of G-d’s gift to Man. It is this imagery that will continue to trouble Jews for a long time to come.

As the series becomes a movie and a box set for Bible classes and home, we can hope for a bit more sensitivity. We can also hope that the producers will include a study guide with sets of the series and the movie. That guide should contain unambiguous statements from Christian leaders explaining what message should be taken from the Crucifixion”and which messages should not, unambiguously and explicitly repudiating the charge of deicide.

The producers worked so hard to present a message of love. They should now ensure that no one can subvert that message to validate and promote hate.