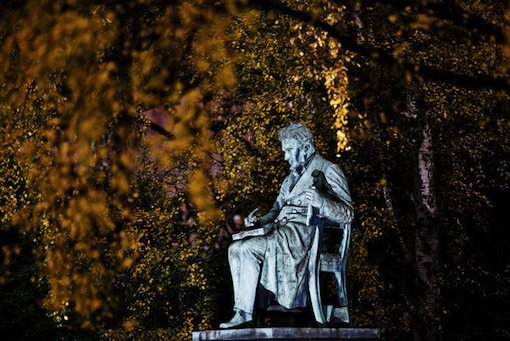 The birth of Danish philosopher Søren Kierkegaard, two hundred years ago this month, has produced many commentaries and events celebrating the great Christian thinker. It’s not difficult to understand why. In works like Either/Or , Fear and Trembling , and The Sickness Unto Death , Kierkegaard speaks to the perennial questions and painful choices we all face, forcing us to confront our evasions and denials.

Kierkegaard’s philosophy is not so much a salve as a thorn in the flesh. To his atheist admirers, he presents a challenge, for they want to celebrate his intellect yet reject his belief in Christianity as the center of truth. Their effort to do so”to square the circle”has led to misdirection, and diversions. Thus, they praise irony and paradox in Kierkegaard’s writings, and delight in his rapier wit; they wax eloquent about his psychological insights and marvel at his prolific output; they explore his turbulent relationship with his father, and doomed courtship with his forlorn fiancée; and they provide expert analysis of his battle with Hegel.

But one thing they hesitate to emphasize is precisely that which drove the Danish philosopher most: his Christian faith. About that, they remain strangely passive. They cannot ignore it, so they try to minimize it, usually mentioning it in a perfunctory manner. Some are more clever, and try to employ Kierkegaard’s philosophy against Christianity, or even empty it of religion altogether. The literary critic Harold Bloom, for example, comments :

Most of us who love Kierkegaard come to him because of his aesthetic achievements, and not for spiritual sustenance . . . . I read Kierkegaard as having more in common with Nietzsche and with Kafka, even with Beckett, than he does with Cardinal John Henry Newman, and other religious writers of the nineteenth century. Whatever he may have yearned for, he was a genius and not an apostle, as he surely knew.

Bloom is correct about Kierkegaard being a genius, but this does not quite exclude his being an “apostle.” The eminent poet W.H. Auden rightly called Kierkegaard “a preacher, an expounder and defender of Christian doctrine,” who “may properly be compared” to Cardinal Newman. Underscoring that are Kierkegaard’s private prayers , which reveal an intense piety, and love and devotion to Jesus Christ. Kierkegaard believed we should approach the Bible with holy reverence, and that it should be “read on our knees.” He summed up the meaning of his life when he declared that his work “viewed as a totality , is religious from first to last,” and that “the whole of my authorship relates itself to Christianity.”

If Kierkegaard’s Christianity creates dilemmas for the secular , it has proven equally vexing for his fellow believers. Kierkegaard was scandalized by the state of Christianity in his day, especially as expressed by the official Lutheran Church of Denmark. He assailed what he called the latter’s involvement in “Christendom””a flabby, self-assured idea of Christian civilization, which went along to get along”with authentic Christianity, which was far more demanding.

He looked around and saw not serious Christians but a mass of people who assumed they were Christians simply because they were born into a supposedly Christian country and belonged to the state Church. He was particularly scandalized by the leading Danish clergy, who rubbed shoulders with the high and mighty, and promoted superficial religion”trapped in a “jovial mediocrity””even as they professed to be “witnesses for Christ.” In a series of polemical blasts, Kierkegaard contrasted this easygoing lifestyle with genuine Christianity:

When one sees what it is to be a Christian in Denmark, how could it occur to anyone that this is what Jesus Christ talks about: cross and agony and suffering, crucifying the flesh, suffering for the doctrine, being salt, being sacrificed? No . . . in Denmark, Christianity marches to a different melody, to the tune of ‘Merrily we roll along, roll along, roll along’”Christianity is enjoyment of life, tranquilized.

At the heart of his attack upon “Christendom” is a repudiation of the notion that the Church can elevate society merely by its existence, and that all Christians have to do to transform society is build up Christianity’s collective numbers.

Kierkegaard replies: “ No, no, no !” Real change, real progress begins with the individual, not with any kind of “statistical Christianity” which places size over substance:

Any reformation which is not aware that fundamentally every single individual needs to be reformed is an illusion. The individual stands alone. The ethical reality of the individual is the only reality. It is not doctrine which ought to be revised . . . it is existences which should be revised.

There can be no reform of the Church, much less society, he declared, unless individual hearts and minds are first converted to the gospel. Otherwise, “our whole way of life” would amount to nothing but “stuff and nonsense.”

For confronting the establishment of his time, Kierkegaard was denounced as being vitriolic and accused of creating division”much like those today who call their fellow Christians to account.

Kierkegaard was misunderstood in his time, and still is today. He once wrote in his journal, “People understand me so little that they do not even understand when I complain of being misunderstood.”

The two biggest misconceptions about Kierkegaard have to do with his attitude toward the Church, and his general disposition. Because he rebuked the Church so sternly, some people think he was trying to subvert it. On the contrary, says scholar Howard Johnson, Kierkegaard was a “loyal son of the Church,” who “like St. Thomas Aquinas,” or any other theologian until recent times, was “so living in the sacramental, ecclesiological reality” of Christianity that it would never have occurred to him to try to “topple altars.” His critique was constructive, not destructive:

His attack arose only when he felt the Church was in a wrong way a part of the culture, succumbing to a culture instead of relating itself to eternity . . . . Kierkegaard never attacked the Church qua Church . . . .

The center of his dislike was a marriage of convenience, wherein the government was more than willing to pay clerical stipends and provide for the maintenance of Church fabrics out of the public treasury in return for the modest, reciprocal favor that, on political and social issues, the Church remain irrelevant and confine itself to “Quiet Hours.”

The second misconception is that Kierkegaard was a perpetual malcontent, the “gloomy Dane,” who could only protest and never find peace and solace. In fact, the moment he committed himself to Christ, unreservedly, Kierkegaard found that peace which was the source and strength of his whole life. After his father’s death, he confessed:

My reserve and self-isolation are broken . . . . My whole being is changed. God’s love overwhelms me. What he has done for me is indescribable. My father’s death has really pulled me up. I dared not believe that the fundamental misfortune of my being could be resolved. But now a hope has awakened in my soul that God may desire to resolve the misery of my being. Now, I am in faith in the profoundest sense.

As his biographers attest , Søren Kierkegard’s life was marked by many trials and tribulations, but he persevered. James Collins, one of his most perceptive interpreters , reminds us that “at his own request, there was erected over his grave a marker inscribed with these lines of his favorite religious poet,” Hans Adolf Brorson:

’Tis but a little while
And I have won,
My conflict here on earth
For ever done;
In Paradise at peace
World without end,
With Jesus I’ll not cease
To speak, as friend

If we keep the faith, and endure the gauntlet of this world, we too, God willing, can achieve the eternal peace which Søren Kierkegaard, through his burning witness, so nobly earned.