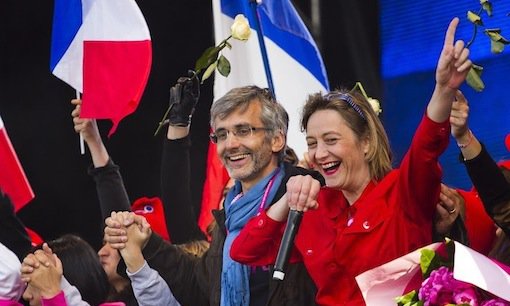 Ludovine de la Rochère is president of La Manif Pour Tous, the movement opposed to France’s recently passed same-sex marriage law. This speech was delivered at a mass rally on May 26, 2013”France’s Mother’s Day”before hundreds of thousands of supporters.

There you are, such an enormous crowd”thank you!

Thank you to all the volunteers of La Manif pour Tous , in Paris, in the provinces too; and of course our spokespeople, among them the first of all, Frigide Barjot. You made possible our Manif pour Tous .

Thank you to intellectuals, jurists, union members, researchers, doctors, elected officials, all of whom have taken up our case. They had the courage to engage in free and independent thought.

Thanks most of all to you! The French of the metropolis, those overseas and abroad. You have the energy that was necessary to raise us up yesterday and today. And tomorrow you will lift us up also!

We are several million who have marched peacefully over the course of the long winter months against the new law, against artificial insemination, against surrogacy for all, against homophobia. We have neither broken a window, not one, nor set fire to a single car. Nothing of the sort!

We are neither a political movement, nor a faith-based movement, nor a coalition of hateful homophobes. Our adversaries have tried everything to paint us in such a way. But they have failed, because one cannot deny that our cause is open to all who worry about the rights and well-being of children. We are people who are but mindful of the interest, the balance, and the happiness of the family.

We are here, all so numerous, because our fundamental and universal values unite us.

The truth is that we do not have the same notion of equality as our opponents do. Our belief, held by most of the country, rests first on the equality of children, equality before the right to have a father and mother, that is to say, an origin and real heritage, rather than a false heritage. Based on that we have come together as atheists, Christians, Jews, Muslims, right, left, straight, gay. For all, the truth that we owe to the child is sacred. We do not want children’s lives to be woven around lies, nor do we want gender studies ideology to triumph.

Then, as our opponents do not understand us, they refuse to debate us, they mock us, and they libel us.

But this time, it is you who are facing the wind, at the failure of the meaning of history. For we do not search for a false sense of History; rather, we shall write it!

All the generations are here, and among them, fathers and mothers and youths, each one keeping watch over us, over all of France, in silence, peaceful.

Yes, we turn now to face the future: yes, we have faith in the future; yes, we build the future and that is why we protest. We want a better world, rather than a brave new world.

What have we discovered along this long road? We are not alone! We are no longer alone, isolated, considered old fuddy duddies, losers, or conservatives”rather, the others will be revealed as those who live outside of reality.

We have carried out a historic mobilization. The Manif pour Tous is the biggest social movement that France has known since May 1968. Let us take stock of what we have accomplished: We are a social force, we are powerful and determined and organized. This success is owed principally to three causes: our lack of self-interest (for we are thinking of future generations), our concern to protect the weakest among us, our respect for the other.

Tomorrow will never be the same.

Now that we have risen up en masse , demanding to be heard, to reflect on this law, which is not only societal but a law of civilization”according to the words of Mrs. Taubira [ France’s attorney general, the politician most associated with the law “Ed. ] herself”what has been the response of the president of the Republic, the government, and the parliament? Condescension, arrogance, and mockery.

They claim to be men and women of dialogue and listening ” but these are nothing more than words. We will have been received only a few minutes by the president of the Republic as well as by Erwan Binet, the caller of the law at the National Assembly; but never have we been received by Prime Minister Jean-Marc Ayrault, nor by Attorney General Christiane Taubira nor by Minister of Families Dominique Bertinotti; never by Jean-Pierre Michel, the bill’s sponsor in the Senate. All these have dismissed us and treated us as homophobes.

In addition to this refusal to dialogue with us, the government and its agencies have added violence and arbitrary oppression. Protests have been forbidden; innocent children, mothers, and peaceful old people were gassed on March 24; floats have been banned; people wearing Manif pour Tous sweatshirts have been arrested; a mother of a family has been assaulted while a prefect watched and said nothing thereby shaming the prefectoral force; peaceful vigil-keepers have been held for questioning and detained; marches leaving from Rennes to join us have been harassed and blocked every day ” what a scandal!

What are their crimes? To be dressed up to protest peacefully, to keep watch in the evening while listening to the reading of the great texts regarding the doctrine of non-violence. And that is the democracy of Ayrault, Valls, and Taubira?

We have protested while respecting the laws of the Republic; they have reacted as the apparatchiks of a totalitarian state, and I choose my words carefully. Are we still living in a true democracy?

After having changed, arbitrarily, the definition of the word marriage, the powers that be have not stopped lying about the figures of the protests; they commanded the CESE to deem unacceptable seven hundred thousand petitions collected in three weeks. Such a scene has never before been seen in the Fifth Republic. While our constitution bans it, the deputies and the senators voted for the law following the roll call imposed by power, which is a characteristic of dictatorships. Only a few heroes have resisted the pressure, such as Bruno Nestor Azérot! In the Senate, there has been tampering and the vote was carried out not by actual votes but by raised hands. A denial of democracy in which the opposition party has been, by virtue of its passivity, complicit!

Our adversaries act this way because they are afraid, because the law they voted is a heinous law written under the pressure from the LGBT lobby ” Pierre Bergé, a man totally marginal within the homosexual community, and they know it.

They act this way because they represent a former time, a time long past, that of deathly ideologues, a time when Man thought he was allowed all, not taking account of the humanity he would bestow on his children.

They tell us always in a peremptory manner that this law is societal, and a law of progress. But how can we believe them? Of what progress do they speak? Their progress, probably: that of marketing the human body, renting out wombs, lying, yes, you do not know it, but you will be able to have two fathers or two mothers, for whatever nature cannot provide, they will authorize. They are Prometheus.

Not long ago, we would have laughed at it; today we weep over it; we are aggrieved!

Thrown onto a toboggan of transgression, one can be stopped by nothing. So it goes with these false prophets of progress and modernity. Once they start talking about nature and ecology, they bandy about the principle of caution. But when it comes to mankind, then nature vanishes, and with it, caution.

Their mouths overflow with the words “equality of man and woman”: One must have equal representation in administrative councils, an egalitarian government, an egalitarian National Assembly. But why should marriage not be a place of equality, too, so that a child will be raised by man and woman? What a strange idea!

One would hope they will tell us: Stop! Listen to the people, let’s debate, let’s reflect. No such luck.

Then you, Mr. President of the Republic, who are supposed to ensure the unity of the French people: Quit being deaf and blind, stop dividing the French, stop raising the anger in all the country.

These are dangerous times. Before the lie and wickedness that this law puts in place, yes, the hour of resistance beckons us. This is a question of humanity, its future, the future of man and woman, our children, and their freedoms.

We too, we are aggrieved! That is why we launched the call on May 18, 2013. Our task is huge, but it is essential. We are numerous in France and in foreign lands too. The whole world watches us, because once again the French have dared to rise up against the tyranny of a minority and its colluders.

I announce to all of you, as well as to those who still think we will give up, that we will carry out this battle everywhere in France!

Lacking a timely and appropriate response from the president of the Republic to our gathering today, prepare yourselves for new actions in the days and weeks to come.

Beyond that, the Manif pour Tous will still be around. It will last, on the French and European landscape. We will participate actively in the life of the state with our convictions and our values.

La Manif pour Tous holds three missions to protect what we consider the key to our society: families, and I mean families.

First mission : the abolition of the Taubira law, if not tomorrow, then some time after. And we fight to block its immediate consequences: insemination for all and gestational surrogacy.

Second mission : Support all the men and woman of courage and good will who will defend their values in the State”the mayors, elected officials, members of civic groups, all who will take the floor in the public debates, opposed to marriage for all.

Third mission : Fight for the reality of man and woman to be recognized, and for the weakest in society to be defended.

We will continue without giving up to defend the male“female marriage, the heritage based on mother“father“child, families, the basic units of all society, places of togetherness for excellence, sources of all the human and economic bounty of society.

We are going to fight against gender studies ideology, the foundation of the “marriage for all” law. We will speak against its dissemination, in particular among the schools. We will lead surveys, publish studies, be activists. To that effect, memberships will be open to its sympathizers beginning in June.

The law is today in effect: so isn’t the last word already spoken on this? Shouldn’t hope disappear? Isn’t your defeat definitive? No!

Our movement of opposition will not stop, because it was born from an innate rejection, a deep refusal, of a law founded on a law that matters to all French people. We refuse for French politics to turn us away from the essential: the urgent preoccupations of the citizens who, today, face a dramatic economic and social situation.

Whatever happens, the torch of French resistance must not go out, and it will not go out: It is called to become ever stronger. The resistance will continue to build up the dam that alone shall stop the wave of plans doing harm to the common good, the future of society, the values of France, the respect of Man, and true democracy.

Generations of the future count on us.

We will surrender nothing, ever, ever!