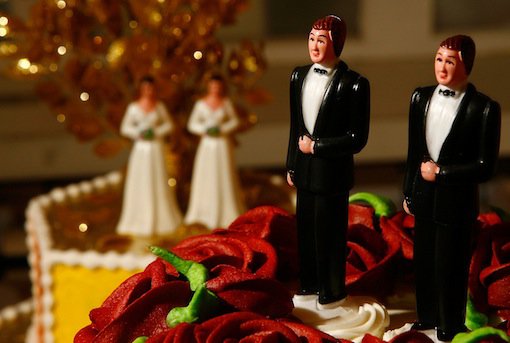 The Atlantic has a very provocative cover story this month: “The Gay Guide to Wedded Bliss.” It explains to anyone who wants to know “what gay and lesbian spouses can teach straight ones about living happily ever after.”

The author, Liza Mundy, highlights some of the most important research on same-sex marriage, presenting much of its critical findings. What’s curious is how she spins the evidence she presents. A more honest reading would give us reservations about viewing same-sex marriage as a model.

Mundy admits that studies have found “higher dissolution rates among [legally registered] same-sex couples” in Scandinavia than among married heterosexual couples. This study, published in Demography , found that even though same-sex couples enter their legal unions at older ages”a marker related to greater relational stability”male same-sex marriages break up at twice the rate of heterosexual marriages.

And the break-up rate for lesbians? It is a stunning 77 percent higher than that of same-sex male unions. When controlling for possible confounding factors, the “risk of divorce for female partnerships actually is more than twice that for male unions.” Mundy mentions this, but only as evidence that “gay marriage can function as a controlled experiment, helping us see which aspects of marital difficulty are truly rooted in gender and which are not.”

The author explains the magnitude of his findings “are consistent with previous research in other countries.” There were no significant differences between the two generational cohorts, indicating that issues of social stigma and growing social acceptance had no meaningful effect.

Additional research by other scholars highlights a major comparative study between hetero and lesbian homes where, in the five-year period of the study, six of the fourteen lesbian mother-headed homes had broken up compared to only five of the thirty-eight mother“father headed homes. They creatively explain that this stability imbalance is likely due to the “high standards lesbians bring to their intimate unions.” Mundy says that “lesbians . . . tend to discuss things endlessly.” Whatever the reason, lesbian relationships are dramatically more volatile, fragile, and short-lived than heterosexual couples, whether cohabiting or married.

But Mundy points out more bad news, something so common in lesbian relationship that it has earned a name: lesbian bed death”the cessation of sex. She also puts a positive spin on this phenomenon, echoing one scholar’s theory that “lesbians may have had so much intimacy already that they didn’t need sex to get it.” (As if one type of intimacy can fulfill one’s desire for all others.)

So what do the guys have to teach us? It might not surprise you.

Mundy is admirably honest here as well, explaining that after the AIDS crisis, “gay male couples are more monogamous than they used to be, but not nearly to the same degree as other kinds of couples.” One study that she cites asked those in various relationships whether they had any agreed-upon rules permitting extra-curricular activities. The differences were astonishing. Only 4 percent of male/female couples had them compared to 40 percent of gay men in legally recognized unions and 49 percent in long-term cohabiting unions.

These findings agree with a much larger body of research. One of these, a widely respected investigation , found that only a third of gay couples had monogamous agreements and truly honored them with no outside sex. In fact, it found that in the openly nonmonogamous relationships, the frequency of sex outside the relationship from its start ranged from two to a whopping 2,500 separate incidents. The median was 41.5 extracurricular incidents since the relationship’s beginning. Frequency in the last year ranged from zero to 350 occurrences of outside sex, with a median of eight incidences in the last twelve months. Even those who pledged true monogamy, the range was from one to sixty-three “slip-ups” with a median of five. The corresponding numbers for men in heterosexual marriages are microscopic in comparison.

In the face of all this negative evidence, Mundy bases her case for the superiority of same-sex marriages on the pure assumption that such relationships are better because they are not clouded by stifling gender stereotypes. They are absent the gender power games that are rumored to exist in natural marriages. But her piece is shot through with the recognition of such gender stereotypes, such as lesbians investing more emotional energy in their relationships and gay men seeking more sexual diversity. She also admits that (as research shows) when two men decide one should stay home with a child, the argument is not about who gets to stay home, but who has to. The lesbian couples were far more interested in child care than the men, to the degree that it tended to threaten the health and longevity of their relationships.

No doubt some same-sex couples are happy, but the kinds of social science lessons Mundy seeks to draw are a matter of unforgiving averages. With more relational instability and divorce, less sex in marriage and more sex outside it, it would appear that same-sex couples do have something to teach us, if only by counterexample.

Glenn T. Stanton is the director of family formation studies at Focus on the Family and the author of five books on various aspects of the family. His two most recent books are Secure Daughters, Confident Sons and The Ring Makes All the Difference .