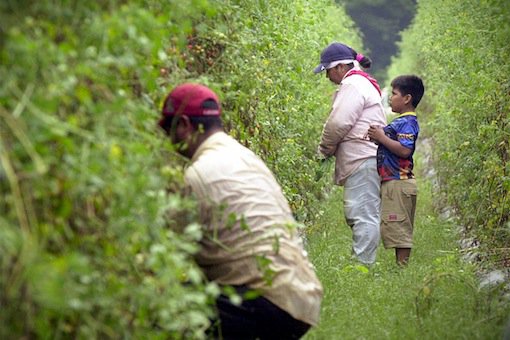 The United States Conference of Catholic Bishops has issued a news release in support of the Gang of Eight’s immigration proposal. The problem is that the Gang of Eight proposal fails by the standards enunciated by the bishops and for other reasons too. At a press conference, Archbishop Gomez said:

Each day in our parishes, social service programs, hospitals, and schools we witness the human consequences of a broken immigration system. Families are separated, migrant workers are exploited, and our fellow human beings die in the desert. Without positive change to our immigration laws, we cannot help our brothers and sisters.

The Gang of Eight bill does not solve the problem of mass illegal immigration, but instead extends the problem. The CBO estimated that, even with the amnesty in the Gang of Eight bill, there would still be upwards of seven million illegal immigrants and their children in the U.S. ten years from now. We would still have a broken immigration system, a mass of mixed status families, and a large number of workers without legal status outside the protections of the formal economy.

We should not be surprised. This is what happens when Congress awards amnesty while leaving border and internal enforcement to bureaucratic discretion. The Gang of Eight amnesty will replicate (and seems designed to replicate) the problems caused by the flawed 1986 amnesty”the amnesty that brought about the situation that the bishops now decry.

Bishop Wester opposed making “the legalization program contingent upon border metrics that are practically impossible to achieve.” The alleged metrics in the Gang of Eight deal are indeed frauds, but that doesn’t mean that significant steps toward border and internal enforcement cannot be made prior to granting legal status. The border fence could be completed. E-Verify could be mandated for both current and new employees rather than having verification be voluntary for the foreseeable future. These are security measures that could be implemented in the near-term. Political figures that would scuttle amnesty in order to prevent improved border and internal enforcement are telling us something about their priorities. They value continued illegal immigration more than they value amnesty for the current population that is in the U.S. illegally.

How, then, to think about immigration? Archbishop Gomez has asked precisely the right question : “ Do we want a country with a permanent underclass, without the same rights as the majority?”

The answer, of course, is no, and that is why we should oppose the current bill. The Gang of Eight bill would create a laboring class”some tied to particular jobs”that would be ineligible for U.S. citizenship . And from the CBO’s estimate and from experience, we know what will happen when Congress passes an amnesty without serious border and internal enforcement”we will get yet another wave of illegal immigrants who will lack the protections of labor law. So by both omission (lack of enforcement) and commission (the guest worker program), the Gang of Eight bill would ensure that the U.S. had a substantial permanent underclass that lacked the rights of the majority and was blocked from full membership in the American polity.

The priorities enunciated by the bishops are not the only ones that matter. The CBO estimates that the Gang of Eight bill would substantially increase the flow of low-skill immigration. This would tend to somewhat lower the wages of the least-skilled American citizens and current residents. The lowest-skill sector of the U.S. labor force has seen wage declines for the past thirty years. This decline in wages has coincided with declining labor force participation and collapsing marriage rates among this population. It is quite likely that the enforcement portion of a policy that combined amnesty with border and internal enforcement would be an economic benefit to the recipients of amnesty (among others).

But even according to the priorities enunciated by the bishops, the Gang of Eight plan is something between a failure and a disaster. The key to integrating the current population of illegal immigrants and preventing the perpetuation of a permanent underclass is to combine internal and border enforcement with a limited amnesty and transitioning to a Canadian-style system that favors high-skill immigration and language proficiency. Support for the Gang of Eight plan, in practice, aides those would seek to profit both economically and politically from a permanent legal underclass and stagnant wages among the least-skilled in the workforce.

If you share the Catholic bishops’ opposition to a permanent underclass, oppose the Gang Of Eight plan.