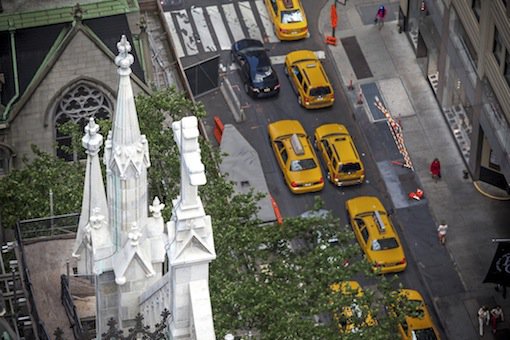 In the last few weeks, the scaffolding covering all 330 feet of the Fifth Avenue façade of St. Patrick’s Cathedral has started to come down. The cathedral, which is currently being restored, was first built in marshy farmland and thus named “Hughes’ Folly” in mockery of the archbishop who began the project in 1858. Now she rests in the hustle amid the bustle of midtown Manhattan, dwarfed by Rockefeller Center, luxury hotels, and high-end shops.

An article mentioned on this blog from the New York Times in 2012 (at the official launch of the restoration) re-posed the question: Will those the cathedral is approaching for restoration funds not contribute because of the unpopular beliefs of the Catholic Church? Further, why contribute to a posh cathedral on Fifth Avenue when there are so many in need?

In a nutshell: because without restoration both we, the visitors and the walkers-by, and the cathedral herself will fall apart. Here’s why.

When the scaffolding first went up in 2007, it was erected so that the pieces of stone that were falling from the building”ranging in size from tiny chips to chunks the size of a fist”would not strike any of the passers-by. The need was absolutely pressing.

The restoration’s costs are tied to its immense difficulty. There’s only one stone carver left who can create new pieces to replace the old chunks falling off, and he’s from Japan. (His father taught him the trade.) I watched him one cold morning, carving, as if it were butter, an eighteen-inch piece for the transept. Of course, this doesn’t take into account the craftsmanship behind the stained glass windows, the altars, the organ, the woodwork . . .

Oh, and the marble? It’s a rare kind called Tuckahoe. The church was lucky enough to stumble across the last available block for use in these restorations. The irreplaceable artistry in the cathedral is unquestionable. But there’s something more.

The first time I sat inside the cathedral for Mass”long before I worked so closely with St. Patrick’s”I saw a woman with several plastic bags alternating between two pews in the nave. She would climb back and forth, wiggling under the bar separating the pews. She’d pause and stand on the kneeler, praying, somewhat loudly, during the Mass. I was sort of fascinated because it was a strangely quiet, yet noticeable distraction/devotion. I could not figure out what she was doing with the plastic bags, but she would rearrange them and then keep moving back and forth, back and forth.

She was left undisturbed by usher and Mass-goer alike. She was free to worship in a place of beauty, tranquility, and peace. St. Patrick’s provided something beautiful, something to marvel at and take you out of yourself.

All beautiful things do this. Babies, art, churches, people”they free us from “I” and “me” and bring us to what is beautiful and what is true and He who is Beauty and Truth.

This is why we need the cathedral.

Is she a testimony to the immigrants who built her, to a fledgling Catholic Church in the New World, to the Irish in particular, to religious freedom, to the millions who have prayed and visited her altars and chapels? Yes, but she’s also a reminder, right in the middle of a city known for power, money, and prestige, that the person of Jesus Christ offers us, through a road like that to Calvary, all that is beautiful and true.

St. Patrick’s faces Rockefeller Center outside of which Atlas struggles under the weight of the world. If you enter the cathedral, walk all the way to the back into the Lady Chapel, and turn around, you’ll see behind the main altar a small statue of the Child Jesus. In his hand he’s holding the weight of the world too, but, unlike Atlas, effortlessly.

The Catholic Church, in preaching the Gospel, does preach unpopular and even difficult teachings. We live in an era where what we see is easily manipulated”we can pick and choose what we want to see. St. Patrick’s stands in our line of vision day in and day out, a visible reminder of the food needed to feed the soul.

Mother Teresa said she had never seen such poverty as that which she had witnessed in the United States. But she wasn’t talking about physical poverty. “I have been to many countries and seen much poverty and suffering . . . But of all the countries I have been to, the poorest one I have been to is America . . . America suffers most from the poverty of loneliness.”