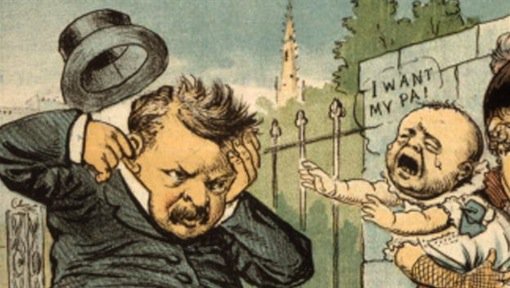 For better or worse, clergy have always been involved in U.S. politics. A Secret Life: The Lies and Scandals of President Grover Cleveland by Charles Lachman tells how pastors, rather fecklessly, virtually decided a presidential election.

In 1884 the Rev. George Ball of the Free Will Baptist Church in Buffalo learned with “shocked incredulity” that former Buffalo Mayor Grover Cleveland, now New York governor and Democratic presidential nominee, had fathered an illegitimate child, whom he had taken away from the mother, after briefly confining her to a mental hospital. He shared his discovery at a meeting of the city’s thirty leading clergy, including a Catholic priest. And he wrote in a Congregationalist newspaper:

It may be too late to do you any good, and may not be needed, but I feel moved to warn you against saying much to the credit of Grover Cleveland. He is a libertine. No Christian should condone his crimes so far as to commend his candidacy. About seven years ago he seduced the head of the cloak department of Flint & Kent’s, leading merchants here. He kidnapped the woman after the boy was born, sent her to the Catholic Insane Asylum [sic] and took the child from her. She escaped, got Milo A. Whitney to help her, finally settled and gave up the child for $500. This I know to be true.

He later commented to another newspaper:

It is painful to think of his offenses and shameful, infinitely shameful, to have such a man commended to the suffrages of a Christian nation. It is enough to alarm all decent people, and even cause the vulgar and profane to hesitate and demand a halt.

The tale of the scandal crisscrossed the nation like lightning. Republican newspapers published Rev. Ball’s charges of moral turpitude amid additional allegations of drunkenness and patronization of prostitutes. Democratic newspapers countered that the mother of the illegitimate child had consorted with numerous Buffalo men and that Cleveland had nobly accepted paternity because he was a bachelor. Meanwhile, Democratic operatives offered the woman $10,000 to defend Cleveland. She instead confirmed the story of seduction and harassment, later even charging rape.

Cleveland had the image of an incorruptible political reformer who fearlessly challenged political machines like Tammany Hall. The torrid allegations shredded his reputation for many. He did not deny paternity but rejected other charges. He seemed to fall behind, as his Republican opponent, former Maine U.S. Senator James Blaine, the “Plumed Knight,” ferociously campaigned across the nation while Cleveland mostly remained in Albany.

Exhausted, just days before the election, Blaine appeared before five hundred clergy at a New York hotel. They were nearly all Protestant, mostly Methodist and Presbyterian, plus two Catholic priests and a rabbi. They passed resolutions denouncing Cleveland’s candidacy as an “insult to Christian civilization” and said his defeat was necessary in defense of “virtue in the home.” The prominent pastor scheduled to introduce Blaine was late, so a more obscure pastor was picked at the last minute because of seniority. He was seventy-two-year-old Samuel Burchard of Manhattan. His words would change the election:

We are Republicans and don’t propose to leave our party and identify ourselves with the party whose antecedents have been rum, Romanism, and rebellion. We are loyal to our flag. We are loyal to you.

A Democratic Party stenographer gleefully ensured that Democratic newspapers quickly published the remarks nationwide. Blaine’s mother had been a devout Catholic, and his sister was a nun. But his inroads among typically Democratic Irish Catholics were erased and revived charges of anti-Catholicism dating to his “Blaine Amendment” of ten years earlier that aimed to prevent government funding of religious schools. The election depended on New York, where Rev. Burchard reputedly lost Blaine 50,000 votes. Cleveland won his own state by only 1200 votes, so only a six hundred-vote shift would have elected Blaine. He prevailed nationally by only 25,000 votes out of 10 million, or one quarter of one percent. Cleveland swept Brooklyn thanks to a warm endorsement by famed Congregationalist preacher Henry Ward Beecher, who had survived his own sex scandal. (Responding to a private appeal from Mrs. Beecher, Cleveland had assured her the charges beyond the “affair I have not denied” were “utterly baseless lies.”)

Rev. Burchard was derided by an embittered Blaine as an “ass in the shape of a preacher.” He was known as the man who “opened his mouth and swallowed a presidency.” His church retired him, and he became a nationwide target of ridicule. Burchard defended his remark as merely clever alliteration.

Cleveland’s clergy nemesis, Rev. Ball, fared little better. He lost a defamation lawsuit against the New York Post , which had called him a “miscreant,” “guttersnipe,” “vampire,” and “rascal.” But evidently Cleveland’s native Buffalo had at least heeded part of Rev. Ball’s warnings. The city voted against its once popular mayor, prosecutor, and sheriff. A betrayed Cleveland refused ever to live in Buffalo again, where he had spent nearly his whole adult life.

The son of a Presbyterian minister who had not much attended church, President Cleveland became a regular congregant of a Washington, D.C. Presbyterian church whose pastor would officiate at Cleveland’s White House wedding to a woman twenty-eight years his junior. In retirement, the Clevelands moved to Princeton, where he was active with the historically Presbyterian university.

Eighteen eighty-four’s election was one of the nation’s dirtiest, and clergy were among its central actors. The example is instructive. Religion has often elevated American politics. But direct involvement by the clergy has not always been helpful. Their primary vocation is to speak God’s Word without compromise, a calling that does not easily transfer into the compromises requisite for electioneering. Directly applying faith to politics is more typically a calling for lay people.