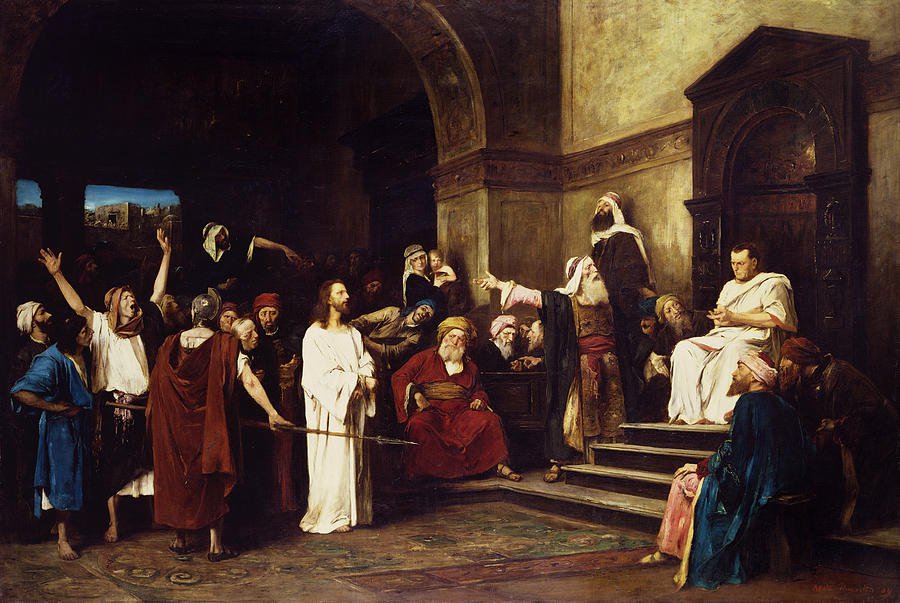 A few weeks ago, Matthew Schmitz posted a story on First Thoughts about a Kenyan lawyer bringing a case in the Hague against Israel and Italy. His legal claim? Jesus of Nazareth was unjustly executed and the modern states of Italy and Israel”the supposed successors in interest of the Roman Empire and Ancient Israel”should be accountable to “uphold the dignity of Jesus.”

On one level, the claim is disturbingly reminiscent of the vicious “collective guilt” excuse cited over the centuries to justify pogroms against Jews. Never Again!

From another angle, it is bemusing. The case is frivolous, of course. But the story got me thinking as a contemporary lawyer about the facts of the matter and the differing legal standards that apply now.

The trial of Jesus was not one transaction, but two, brought under different legal codes and litigated under separate jurisdictions. The first charge was religious: Jesus was accused by the Sanhedrin of blasphemy for claiming to be the expected Messiah. A conviction of blasphemy under Jewish law required the testimony of at least two witnesses”but those who testified against Jesus couldn’t even get their stories straight.

His case collapsing, the desperate Caiaphas demanded that Jesus tell them plainly whether he was the Messiah. “You have said so,” Jesus answers”not an admission. He then made an audacious claim, “But I tell you, from now on you will see the Son of Man seated at the right hand of Power and coming on the clouds of heaven.” Caiaphas rends his garments and declares Jesus guilty. Case closed.

Not so fast. Even if the statement was blasphemous”let’s set aside the question of Jesus’s actual nature”it could be construed as a confession. Yet under Jewish law, a voluntary confession could not be the sole basis of guilt. Judgment reversed.

Had Jesus been legitimately found guilty of blasphemy, he could have been executed”but not by crucifixion. Yet, perhaps out of a desire to humiliate their long-hated enemy by seeing him hung naked from a tree, crucifixion seems to have been the Sanhedrin’s goal all along. To achieve that end, they needed Rome, which brings us to the second juridical exercise.

The Roman Empire was a multicultural society. So long as the people obeyed the civil law and paid their taxes, rulers did not generally interfere with personal religious beliefs. Thus, “blasphemy” against the Jewish faith was legally irrelevant to Pilate, which was why the temple leaders cast several vague charges against Jesus, saying “He stirs up the people with his teaching.”

Pilate finds no fault, but learning Jesus was a Galilean, he sends Jesus to Herod. Bored Herod just wanted a miracle. When Jesus stood mute, he sent him back to Pilate, who seems to have interpreted the defendant’s return as exoneration under Jewish law.

The Sanhedrin now level a more specifically political charge against Jesus, claiming that as a self-proclaimed “king of the Jews,” he presented a clear and present danger to Caesar’s rule. Pilate held a formal hearing, asking the defendant if he was indeed the king of the Jews, only to be told, “My kingdom is not of this world.” Otherwise, Jesus added, his “servants would be fighting” to protect him from his accusers.

Religious, not political! Pilate again declares Jesus not guilty, stating, “I find no fault in him at all.”

Temple leaders then threw what we would today call a “Hail Mary,” pass, instigating the mob into a hue and cry: “Crucify him! Crucify him!” Pilate, was at first scornful and mocking, “You would crucify your king?” Given the occupation’s troubled and bloody history, imagine his incredulity at the roared response, “We have no king but Caesar!”

Perhaps in that unexpected false cry of loyalty to Rome, Pilate sensed a threat that complaints would reach the volatile Tiberius that his Judean governor had refused to protect Caesar’s rule. In any event, the balance of power shifted suddenly from the governor to the mob. Pilate never changed his formal verdict, but yielded to a lynching. And with that, the last pretense of legality in the entire affair evaporated, acknowledged by Pilate when he vainly tried to wash his hands of responsibility for Jesus’ death.

But back to the current lawsuit: To prevail in court defendants must bear some form of legal responsibility. But modern Italy did not arise out of the ashes of the Roman Empire, nor is Israel the successor of occupied Judea. Indeed, there was no independent Israel from its conquest by Pompey the Great in 63 B.C. until Israel’s declaration of statehood in 1948.

Finally, for a lawsuit to succeed the plaintiff must be damaged. Jesus’ mother might have had a claim based on loss of support, I suppose. But that claim expired with her repose.

There was certainly no earthly justice in the events of Holy Friday. Even a thief being executed next to Jesus, in his agony, saw that.

But according to the Christian faith, utter injustice was precisely the necessary point. For out of that bitter cup poured forth God’s inexhaustible mercy.

The Halakah of Jesus’ Trial by Chaim Saiman (August/September 2013)