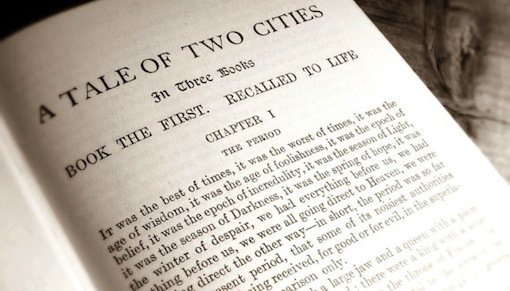 London’s TheatreUpClose recently announced a new production of A Tale of Two Cities , with a twist. Based on an earlier adaptation by Terence Rattigan and John Gielgud, the play “reimagines Dickens’ dangerous and doomed antihero Sydney Carton as a member of the 27 Club (which includes Jimi Hendrix, Janis Joplin, Kurt Cobain and Amy Winehouse).”

The 27 Club, in case you didn’t already guess, consists of stars who died at the age of twenty-seven (of whom there are a surprising number ), usually from drug or alcohol abuse.

Though Charles Dickens’ novel is set well over two centuries ago, a few similarities between his “doomed antihero” and those doomed stars do spring to mind. Chief among them are Sydney Carton’s alcoholism and depression. With these comes a sense of fatalism: “I am like one who died young,” he says early on, and later, “I am not old, but my young way was never the way to age.”

We’re never told how old Carton actually is, but in fact it’s impossible that he could have died at twenty-seven. The first time we see him, he’s working”sort of”as a lawyer, and according to this helpful timeline , his death comes thirteen years later. Still, the comparison reminds us of how startlingly modern this eighteenth-century character can appear. In fact, there’s something about the whole novel that’s strangely avant-garde . Carton’s underdog status and detachment from his surroundings may appeal to us, and yet he shares with those very surroundings a certain timeless quality.

Yet not everyone is likely to applaud TheatreUpClose’s revival of the book. Dickens has taken flak from those who thought his French revolution story wasn’t revolutionary enough. A. N. Wilson, in his Afterword to the Signet Classics 200 anniversary edition, complained about “the incoherence of his ideas,” adding,

[Thomas Carlyle] knew that you could not continue to suppress people without encountering the universal justice of things. Dickens wanted to believe this, but he ultimately responds perhaps as most of us do when faced with outbreaks of terrible violence. In the end, he detests the violence itself so much, and fears it so deeply, that he has to commit the sin of Mr. Stryver [Carton’s reactionary boss] and stop asking why it is there.

This is untrue. From first to last, Dickens is well aware of why the violence is there. The incident that triggers the events of his novel”though we don’t know it at first”is the rape and subsequent death of a young peasant woman, at the hands of two aristocrats. This nameless young woman represents all the suffering people of her nation, and the family members who struggle to avenge her are the apologists of the Revolution.

But the setting of that revelation is telling: It takes place in a kangaroo court where the innocent descendant of those aristocrats, Charles Darnay, is condemned for their crimes. If Dickens switches sides in this story, as Wilson and others contend, it’s not for any lack of sympathy with those who are suffering; it’s because of his sympathy.

It is a great stretch to accuse the creator of Oliver Twist, Little Dorrit, and Jo the crossing sweeper”and the tireless promoter of many real-life reforms and charitable efforts”of failing to identify with the poor, especially after his own scarring childhood experience of poverty. As Clive Hurst and Violet Moller put it in their recent book The Curious World of Dickens , “He knew at first hand how it felt to be penniless, cold and desperate, and the memory and fear of these experiences brought realism to his stories and urgency to his philanthropy.”

But they did not leave him with a lingering sense of class resentment or envy. Certainly Dickens can be witty, even barbed, at the expense of members of the upper classes. But unlike so many other social critics, he refuses to condemn any particular class as a whole. A committed individualist, he takes each case on its merits. For the young woman who was raped and killed, Dickens has nothing but compassion. But when that woman’s vengeful sister begins to slaughter innocents herself, it’s a different story.

There’s a reason Dickens shies from endorsing the revolutionists’ political agenda: Politics mattered to him, but something else mattered more. What he was really opposing was blind hatred. I use the term deliberately, for the greatest villainy in the novel”on both sides of the conflict”stems from spiritual and moral blindness. “It was nothing to her,” Dickens writes of Madame Defarge, “that an innocent man was to die for the sins of his forefathers; she saw, not him, but them.”

Above all, Dickens wants us to see ”to look at a person and recognize an individual, not a class or a family or an income bracket. The blind hatred I spoke of may be born of contempt for the poor or resentment of the rich, but in either case, it is deadly.

In keeping with this theme, Sydney Carton’s ability to let go of envy and bitterness helps to break the toxic cycle and change the course of events. For Dickens’ doomed rock star of a hero ultimately transcends the 27 Club, after all. Instead of letting his addiction take his life as they did, he freely gives his life to save someone else. What TheatreUpClose should bear in mind as it prepares its adaptation is this: It is this man’s repentance of his own “poor blindness and errors,” and his determination to show selfless love in a culture maddened by hate, that truly make Two Cities a tale for our time.

Gina Dalfonzo is editor of BreakPoint.org and Dickensblog .