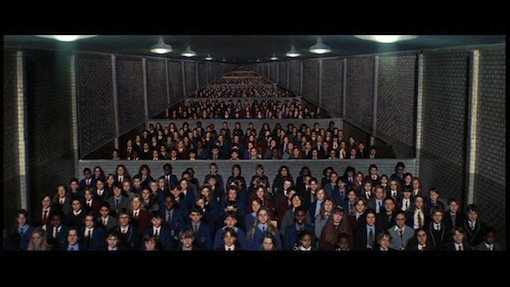 Utah state senator Aaron Osmond has proposed eliminating compulsory public school education. He is a member of the senate’s education appropriations committee. Critics suggest”among other things”that he is out to reduce the billions of taxpayer dollars required for public education.

Sen. Osmond complains that compulsory education has produced indifferent parents who have thoroughly disengaged from their children’s education. This has forced teachers into becoming all sorts of things classroom teachers were never meant to be: sex educators, sensitivity trainers, behavioral counselors, and nutritional dietitians. Besides, a compulsory education law inevitably lessens respect for teachers while turning them into surrogate parents.

Parents who do try to engage with the school find a public system uniquely designed to resist giving children the individualized academic attention they need. The education system is overburdened, costly, and “obligated by law to be all things to all people.”

That’s the essence of the problem he describes. His solution is what he calls “personal choice,” shifting from universal compulsion to individual choice. “In a country founded on the principles of personal freedom and unalienable rights,” he asserts, “no parent should be forced by the government to send their child to school under threat of fines and jail time.” Parents, Osmond believes, should decide whether or not to enroll their children in public schools.

The media response was only modestly enthusiastic; really it was more like a sustained series of dismissive hoots. But I figure that’s because Sen. Osmond never identified or answered the obviously glaring weakness in his argument: What happens to children who are not in school?

He says nothing about those children whose parents do not enroll them. Should they not be required to be someplace? The answer is yes”but where?

Fortunately, I am here to provide the answer. I really don’t know why Sen. Osmond didn’t think of it himself. (Self-disclosure: A good deal that follows is intended as whimsical irony drenched in a light sardonic tone.)

So, the first thing is to keep compulsory education through the eighth grade. If parents have a problem with that, no fines or jail time, but we will put the parents back in the eighth grade at least through summer school.

Anybody seeking education beyond the eighth grade will sign a year-to-year learning contract. If someone fails to meet the stipulations, they are removed from school for one semester and assigned to a roadway litter clean-up crew.

Now, my modified plan assumes that many but not all thirteen- and fourteen-year-old children will want more education beyond the eighth grade. But for those who don’t (and this really is the essence of simplicity), we put them to work as taxpayers.

Of course that requires they have a place to work. Congress should nationalize all the fast food establishments in America and place them under a new cabinet post, a Department of Hamburgers or the like. Unoccupied children will fill America’s counter spaces with their youth and vitality, at least until they are eighteen when they must fend for themselves.

Voil , instead of compulsory education, we will have compulsory employment for children who don’t go to school. We keep our eyes on the kids and Sen. Osmond still gets his “personal choice.”

Perhaps there are some wrinkles I haven’t worked out entirely.

Compulsory education has a long, long history. If Wikipedia can be believed, Western thought traces it to Plato’s Republic . It is even said the Aztecs had a system. Compulsory public education in America arose in part, as Osmond puts it, “for fear that some children would not be educated because of an irresponsible parent.”

One of the perceived problems addressed by the 1852 Massachusetts compulsory education law was what to do with parents who are “unfit to have [their] children educated properly.”

Nowadays, we worry more about schools that have become unfit to properly educate children. A lot of that, I suppose, falls back on the parents, again. Yet I agree with Sen. Osmond to a small extent. If compulsion isn’t working, and maybe it isn’t, it would be nice to find something that will.