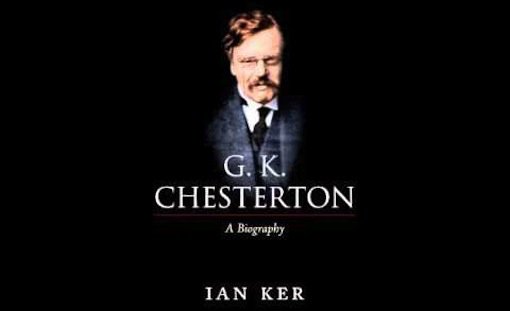 In a review quoted on the back cover of Ian Ker’s G.K. Chesterton: A Biography (Oxford), Susan Elkin suggests that Fr. Ker’s book “has the potential to establish Chesterton in what Ker regards as his rightful place as a major English author.” That’s certainly true; but one does wonder about that “Ker regards . . . ” business. Does Ms. Elkin not regard Chesterton as a “major English author”? I imagine she would regard George Bernard Shaw, Chesterton’s friendly antagonist, as such; and Shaw without doubt regarded Chesterton as such.

Fr. Ker reminds his readers just why that’s the case, which has to do with both the depth of Chesterton’s insight and the breadth of his literary accomplishment. Catholics who know GKC primarily as one of the 20th century’s most winsome and effective defenders of Christian orthodoxy will learn that Chesterton was also a distinguished literary critic: perhaps the greatest analyst of Dickens ever, and a man whose insight into literature drew the admiration of the likes of Joseph Conrad. Fans of Chesterton’s own fiction”the Father Brown mysteries, The Man Who Was Thursday , The Napoleon of Notting Hill , some of the greatest nonsense verse in English”will learn, or be reminded, that GKC was also one of the most prolific journalists of his time, a man under constant deadline pressure who, like Mencken, was incapable of writing a dull sentence. Those who imagine Chesterton an amiable lightweight will have to wrestle with Etienne Gilson’s judgment that Chesterton’s small book, St. Thomas Aquinas , was “without possible comparison, the best book ever written on St. Thomas. Nothing short of genius can account for such an achievement.”

And then there is Chesterton the public figure, who cannot be extracted from Chesterton the literary man. For decades, GKC was at the center of the great public controversies of his day, and engaged both issues and opponents in a way that drew, not merely the respect, but the love, of his opponents. One need not agree with Chesterton’s opinions in whole or in part to recognize that he had a remarkable insight into modernity and its discontents and a singularly fetching way of demolishing an intellectual opponent without drawing blood or leaving bruises.

Ker’s Chesterton is also full of interesting Chestertoniana with which even devoted Chestertonians may be unfamiliar. Among the new things I learned about Chesterton was his passion for Polish independence. Fr. Ker’s telling of a GKC visit to the Polish Second Republic between the world wars is a lovely vignette in its own right as well as an illustration of Chesterton’s political insight. For GKC saw, well before the evil deed was done in September 1939, that Poland would be struck by both Nazi Germany and Soviet Russia, acting in cahoots against an outpost of Christian civilization.

Then there is the tale of Chesterton’s months as a guest lecturer at the University of Notre Dame. It’s a lovely story of Chesterton and his wife discovering the vitality, generosity, and hospitality of U.S. Catholicism in a “Catholic moment,” and at a Catholic institution, that had yet to be affected by the acids of ambiguity. Thus in granting Chesterton an honorary degree, university president Fr. Charles O’Donnell, CSC, cited “with the greatest possible satisfaction . . . that note of confident and triumphant Catholicity” that had “rung through” Chesterton’s lectures on Victorian literature and history. (That the Notre Dame spin machine had not yet achieved the prodigies for which it is currently famous is clear from Fr. Ker’s observation that the university’s initial announcement of Chesterton’s appointment “somewhat curiously” portrayed Chesterton as “if not one of the really great men of contemporary literature, certainly . . . one of the most discussed and caricatured”!)

Through seven hundred pages that reflect an immense work of devoted scholarship, Ian Ker weaves the story of a Catholic defender of reality who was utterly convinced that history is His-story, God’s story, and thus a divine comedy, not a terrible tragedy. Chesterton’s rollicking humor, which bound both friend and foe to him, was not a quirk of personality. It was an expression of his Christian faith, hope and love.

George Weigel is Distinguished Senior Fellow of the Ethics and Public Policy Center in Washington, D.C. His previous “On the Square” articles can be found here .