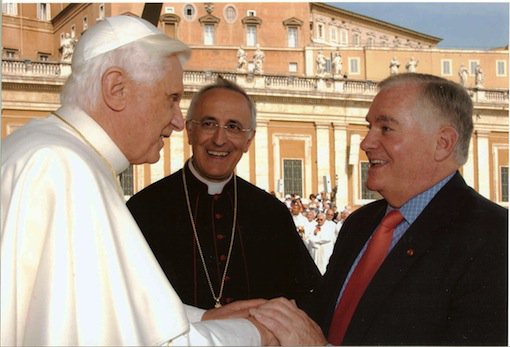 Gary Krupp is the president of the Pave the Way Foundation, an organization whose main purpose is to break down the non-theological obstacles between religions, particularly the three Abrahamic faiths. Krupp has particularly contributed to Catholic-Jewish dialogue, and in 2000 Pope John Paul II knighted him Knights Commander to the Pontifical Equestrian Order of St. Gregory the Great. In 2007, Pope Benedict XVI elevated him to knight commander with a silver star. Krupp is the most-decorated Jew in the Vatican’s history. In 2002, he received the Tree of Life award from the Jewish National Fund.

Your Pave the Way Foundation deals with defending the wartime legacy of Pope Pius XII. What is the current state of this debate? In addition to your foundation, a number of other Jewish voices”including Martin Gilbert, perhaps Britain’s leading historian of World War II, and Rabbi David Dalin of Ave Maria University”have vigorously defended Pius XII in recent years.

The debate is over. Those who attack Pius XII still do not have a shred of documented evidence to support their claims. They base their theories on the books and research of historical revisionists whose research is weak and faulty. Every charge against Pius XII can be proven wrong. The problem is getting this information out there so that fresh, neutral minds can review and process it and render an opinion. I once showed a simple PowerPoint presentation of the documents we discovered to seventy young rabbinic students at Yeshiva University. All of the attendees said there is no question that Pope Pius XII was a hero to the Jewish people, when many of the other religious and political leaders of the time did literally nothing.

Sir Martin Gilbert and Rabbi Dalin are strong supporters of Pius XII, along with many other Jewish scholars, including Israeli Holocaust survivor and archivist Michael Tagliacozzo, Albert Einstein, Golda Meir, Israeli historian Pinchas Lapide and many others.

Franklin Delano Roosevelt and the inner circle of Winston Churchill were informed of the destruction of European Jewry by Jan Karski of the Polish underground, yet were dismissive of his pleas. Why is there so much talk of the “silent pope” but not the “silent president” or the “silent prime minister”?

History is written by the victors. World opinion is formed by carefully crafted media manipulation and the disinformation networks within the international intelligence communities. The general population is simply not diligent about questioning news sources. The accepted reality of the actions of the world leaders of the era versus that of Pius XII is a perfect example. The truth is that it was Pius XII who acted deliberately and directly to save Jewish lives and he did so from ground zero of the war in Italy. The Vatican was infiltrated by spies and surrounded by hostile forces. The Catholic Church under the pontificate of Pius XII acted to save more Jews than all of the world’s religious leaders combined. This fact is inexcusable as many of these leaders lived in the safety of neutral nations, in the US and the UK, for example.

What responsibility does the historical legacy of Christianity bear for the Shoah? On the one hand, medieval popes defended Jews against blood libel charges; on the other, the Fourth Lateran Council in 1215 required Jews to wear gold stars to distinguish themselves from European Gentiles, and the Roman Ghetto, run by the popes, was the last ghetto in Europe before the rise of Nazism.

When one examines Christianity’s historic treatment of Jews one can readily see that early Christianity bears a major responsibility for the conditions that led to Nazi atrocities. Since Judaism is not a proselytizing faith, the consequences of this religious policy are that there are only sixteen million Jews in the world today, comprising less than 0.2 percent of the world’s population. With such a size and nonviolent nature, Jews have always been a convenient target for many. From the extreme of physically attacking Jews to the apathy of silence, anti-Semitism was the gasoline which fueled the terrible effects of the Holocaust. Unfortunately, we still see anti-Semitism except today, it is conveniently shrouded by the politically acceptable form of anti-Zionism and anti-Israeli condemnations.

In reality, anyone visiting or living in Israel can freely practice their religion, and is protected whether he is Jewish, Christian, or Muslim. Women are treated with dignity and respect. Yet all one reads about is Israeli apartheid and occupation. One needs to examine the true history of this region to see that these accusations have been skillfully crafted by experienced disinformation specialists.

These disinformation experts employ an extremely effective mechanism. When the religious extremists brutally attack innocent civilians, similar to Nazi crimes, the experts label the victims as Nazis. Any action taken to protect or defend their families and their land is reported as an atrocity. Since the world seems to go along with any anti-Israeli publicity, this label sticks and is now becomes a lightning rod of criticism. The unfortunate reality is that the majority of the public believes every word of what they read and hear in the media.

The Christian world is apathetic today when they remain silent observing the almost daily murder of innocent Muslims or Christians in many Arab countries. The Christian world chooses to pander to the “bullies” and seems to refuse to forcefully use their political and religious power to end these atrocities.

How do Jews evaluate the recently finished pontificate of Benedict XVI? Cardinal Joseph Ratzinger showed great theological sensitivity to Jewish issues, and his 2005 election to the papacy was greeted with elation by many Jews. However, this Jewish enthusiasm ebbed somewhat in 2009 when Benedict XVI lifted the excommunication of a couple of Lefebvrite bishops, one of whom is a Holocaust denier.

By and large Jews look favorably upon the pontificate of Pope Benedict XVI. Yes, indeed there have been bumps along the way but Benedict’s dedication has advanced the principles set forth in the Declaration Nostre Aetate . As prefect of the Congregation for the Doctrine of the Faith under Pope John Paul II, it was Joseph Ratzinger’s writings and theological justification of Catholic Jewish relations that John Paul II so heavily relied upon.

Pave the Way Foundation was directly involved in clarifying the controversy of the attempt to bring the Lefebvrites back into fold of the Catholic Church. Had it succeeded, this action would in fact of been good for the Jewish people, but very few understood that perspective. Historically, when a breakaway group from the Catholic Church grows on its own, with new religious beliefs and doctrinal changes, the Church distances itself. By attempting to bring the Society of Pius X back to Catholic teachings, Benedict would have been neutralizing their extremist views, especially on Vatican II, Nostre Aetate , and Catholic relations with other religions.

The announcement to lift the ban of excommunication against the Lefebvrites was not well understood in the public. Many, including priests and bishops, believed they were being welcomed back into full communion with the church. A professor of canon law in Rome told me this only permitted the church to speak to the group, in order to negotiate their possible return to full communion. Pave the Way Foundation immediately wrote to the Secretary of State and advised them to issue a press release, clarifying the obvious misconception. Three days later, this statement was issued and this calmed things down considerably. The fact that Richard Williamson was a Holocaust denier only made matters worse in the eyes of the Jewish world. In reality, most people believe that the pope has the power to order the clergy to follow personal political agendas and this is absolutely not true. The clergy is free to voice any political opinion they wish, no matter how obscure. The pope can only distance himself from these views, which Benedict immediately did.

What has so far been the Jewish reaction to the election of Pope Francis? The pontiff recently denounced anti-Semitism as un-Christian, and as archbishop of Buenos Aires he enjoyed good relations with Argentina’s Jews.

Within the Jewish world there is no doubt that the onward positive relations with the Holy See will continue and will be advanced to even higher level under Pope Francis. On June 24, the pope met with the International Jewish Committee on Interreligious Consultations, where he plainly stated, “Due to our common roots, a Christian cannot be anti-Semitic!” Certainly Pope Francis has demonstrated and vocalized his personal feelings on this issue. His intention to guide the Catholic Church to solid and unchangeable doctrine on subject of Jewish Christian relations is undeniable.