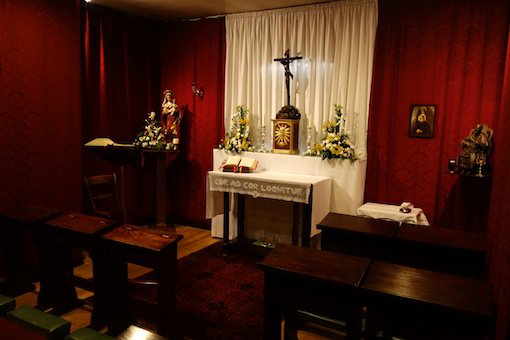 The small oratory at Littlemore”dark but warm, dominated by red damask hangings that exude Victorian piety”is the room in which John Henry Newman was received into full communion with the Roman Catholic Church. Newman is most famous for that act, and that is why the Catholic Church celebrates his feast day today, on the anniversary of his reception, and not on the day of his death, as is customary. Those of us who have followed in his footsteps from evangelical Protestantism through Anglicanism into Catholicism revere him. For us he is a guide and patron who spurred us on and captures what we thought and felt with prose, intellect, and holiness to which we can only aspire.

Yet as much as Newman is famous for being Catholic, we must also remember that he spent much of his life as an Anglican. Catholics can justly adopt his Anglican writings as their own, but they remain a permanent part of the Anglican patrimony, too. This is perhaps most true of Newman’s Parochial and Plain Sermons , the seven-volume collection of his sermons delivered in Oxford’s Church of St. Mary the Virgin from the same pulpit that John Wesley once occupied. Just as the form and content of Bach’s music depend on his Lutheran faith, so Newman’s sermons depend on his Anglicanism. Catholic homilies at his time were not lengthy, written, or highly rhetorical, which is why very few of Newman’s Catholic homilies survive. Had he not been Anglican, he would not have left us these rhetorical masterpieces.

In his sermons, Newman strove manfully (as he would have put it) against the religious tendencies of his day that could compromise Christian faith and vitiate the pursuit of Christian holiness. One of his core themes is the right place of the affections in the spiritual life. In his day, as in our own, people settled for a lukewarm Christianity. They talked about sin, mercy, and forgiveness as ideas, without examining themselves to see how they played out concretely in their own lives. This, Newman argues, leads to false comfort and empty faith. By contrast, “self-knowledge is at the root of all religious knowledge.” He continues:

Without self-knowledge you have no root in yourselves personally; you may endure for a time, but under affliction or persecution your faith will not last. This is why many in this age (and in every age) become infidels, heretics, schismatics, disloyal despisers of the Church. They cast off the form of truth, because it never has been to them more than a form. They endure not, because they never have tasted that the Lord is gracious; and they never have had experience of His power and love, because they have never known their own weakness and need.

In order to experience and believe in God’s love, you have to experience just how much you need that love. In order to speak truthfully about God’s mercy, you have to know the reality of that for which he has mercy. “Fear and love must go together,” Newman writes, “always fear, always love, to your dying day.” Hence Christianity is not about feeling happy, good, or saved. Rather it is about feeling

a deep resignation to God’s will, a surrender of ourselves, soul and body, to Him; hoping indeed, that we shall be saved, but fixing our eyes more earnestly on Him than on ourselves; that is, acting for His glory, seeking to please Him, devoting ourselves to Him in all manly obedience and strenuous good works; and, when we do look within, thinking of ourselves with a certain abhorrence and contempt as being sinners, mortifying our flesh, scourging our appetites, and composedly awaiting that time when, if we be worthy, we shall be stripped of our present selves, and new made in the kingdom of Christ.

Newman’s point is not to replace self-satisfaction with self-loathing. Rather, it is to stop thinking about ourselves, think about Christ, and obey to his commands. Bernard of Clairvaux and the rest of the Fathers would nod in agreement.

The hedonistic paradox is the truth that if you pursue pleasure for its own sake, you will not find it. In his sermons, Newman sets forth a paradox of Christian affections: If you focus on your own feelings and state of mind as if they were “the main business of religion,” you will never develop them rightly. Instead, you should turn from self-contemplation to the contemplation of Christ and let right feelings arise from following him. God is not an emotional high, and seeking God does not equate with seeking an emotional state.

Furthermore, you should not wait until you feel the way you think you should before deciding to act. Living faith produces works, but living faith is not a matter of having right feelings, especially right feelings independent of right works. It is not a matter of “spiritual-mindedness” or “certain emotions and desires” but of the mind and heart laying claim to truths.

Newman goes on to argue that claiming that faith must always proceed works in living the Christian life is “mistaking a following in order of conception for a following in order of time . . . ” In fact, he writes, our works are “the concomitant development and evidence, and instrumental cause, as well as the subsequent result of faith.” Works do not follow from faith as a matter of course, just as thinking or feeling that you love someone does not replace the hard act of will of actually loving them. The Christian life consists primarily not in glorious feelings”as good as those are”but in inglorious acts of love. Or in Newman’s marvelous phrase: “It is beautiful in a picture to wash the disciples’ feet; but the sands of the real desert have no lustre in them to compensate for the servile nature of the occupation.”

That said, we find that our thoughts and affections of love are reinforced in our acts of love, which spurs us on to further actions. This is as true for the love of children and spouses as it is for the love of Christ. It is as true for Catholics as it is for Anglicans, in Newman’s day and our own. The fact that the most famous Catholic convert proclaimed it while he was an Anglican reminds us that his Anglican works are, in a deep sense, truly catholic. The Fathers of the Second Vatican Council wrote in Lumen Gentium of “many elements of sanctification and of truth” outside the Catholic Church’s visible structure: “These elements, as gifts belonging to the Church of Christ, are forces impelling toward catholic unity.” In the decree on ecumenism, they note that such elements “belong by right to the one Church of Christ.” They continue: “Whatever is truly Christian . . . can always bring a deeper realization of the mystery of Christ and the Church.”

May the prayers and example of John Henry Newman help us strive manfully to love and serve Christ in the world, and may they lead us all”Catholic and Protestant alike”out of the shadows and ever more into the One who is the truth itself.

Nathaniel Peters is a doctoral candidate in theology at Boston College.