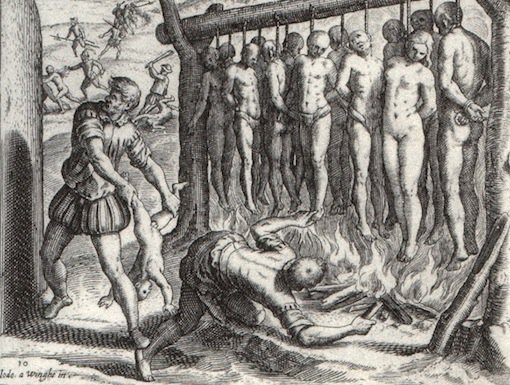 We often hear complaints about the degradation of morality in the contemporary world, as compared with past eras. This may or may not be true. But if we focus on the development of conscience , and particularly in the Western World, which has been affected (even in “post-Christian” regions) by Judeo-Christian values—a definite, gradual improvement is discernible, at least in certain areas.

Take genocide , for instance. Even the term, “genocide,” is a twentieth century neologism. The contextual idea behind it did not exist in the ancient world. When, in the Old Testament, we hear about Moses’ successor, Joshua, enforcing the “ban” ( herem ) by exterminating men, women, children and even animals in laying waste to the Canaanites—we moderns put this in the category of genocide, or “ethnic cleansing.” At the time, however, these were normal warfare tactics, not something evil or inhuman.

Similarly, when Thomas Aquinas, in his Summa , discusses certain Biblical actions which were commanded by God but seem to disregard the natural law, he includes: God’s command to Abraham to slay his son, Isaac; the command for Israelites fleeing from Egypt to steal gold and silver to take with them; and the command of the prophet Osee to commit fornication as a sign of Israelite infidelity to Yahweh. But he sees no necessity to explain actions of the Hebrews that we would now consider to be genocide.

The current, almost universal, abhorrence of genocide stems from examples in the modern world—Hitler exterminating Jews, Turkey’s massacre of Armenians, Serbian atrocities against Muslims in Bosnia, Sudan’s systematic extermination of black Christians. Genocide may still be going on; but for the Western world in general, it is considered execrable. The possibility of future genocides horrifies our conscience.

We find a similar change with regard to slavery. In the Bible, the Greek term doulos and the Latin term servus have “slave” as their primary meaning, and “servant” as the secondary meaning. But in most English translations, “servant” is the usual rendering, except in cases where “slave” must be meant—e.g. in the New Testament where “master” and “slave” are contrasted, and especially in Paul’s epistle to Philemon, beseeching Philemon to accept back his runaway slave whom Paul had baptized. (Paul, however, condemns slave- traders —“menstealers”—in 1 Tim. 1:10.)

Again, Aquinas in the Summa considers slavery tolerable under certain economic conditions, and John Locke in the seventeenth century considered it acceptable in certain circumstances for those conquered in war. And obviously, until the middle of the nineteenth century, many presumably conscientious Christians accepted the existence of slavery as an institution. We now wonder, how could this be? What were they thinking? How could so many of our Christian forebears not realize the intrinsic evil of slavery?

Some psychologists, such as Julian Jaynes, hypothesize that there has been a massive remarkable change of consciousness in the last few centuries. Ancient peoples, as indicated by their literature and history, apparently had no concept of the value of the individual person as an individual. They were living in a type of collective consciousness. The concept of individual rights, which we take for granted, has been slow in coming. We can see it, for instance, in the sixteenth century when the Dominican friars Francisco de Vitoria and Bartolomé de las Casas began to offer impassioned justification for the rights of indigenous people newly discovered in the Americas—this justification coming sixteen centuries after Christ.

But in the West, in tandem with the renunciation of slavery, the consciousness of individual rights has gathered steam in the last few centuries, and has led in many parts of the world to moral and legal advancement of the rights of minorities, as well as women’s rights and female suffrage. Discriminatory policies that had been previously taken for granted began to cause pangs of conscience.

Polygamy in the Christian West has been replaced for millennia by monogamy, which offers greater respect and independence to women. It’s true that serial monogamy (through divorce and remarriage) is rife, and the acute scarcity of women in countries like China and India (because of selective female abortion) has caused new and serious social problems. But that doesn’t detract from the true advance monogamy represents.

Infanticide, commonly practiced in the pagan Roman Empire, is now considered abhorrent by almost everyone, aside from some strange “moral philosophers” like Peter Singer and his bioethical bedfellows. Our greatest struggle lies in getting people to recognize it when it happens, as infanticide continues on under the hand of medical “professionals” who carry out the killing of unborn children for the majority of mothers who shrink from carrying out the act themselves.

But this issue—the abolition of the killing of infants through abortion—may also be the most promising area for the next major step in moral conscientiousness. One considers the aftermath of the 1857 Dred Scott decision of the Supreme Court, which granted the right of slave ownership in a country seriously divided on the morality of slavery, but was overturned by Congress with passage of the Thirteenth and Fourteenth Amendments to the Constitution. The growing awareness that the right to life for humans begins at conception may bring about in our lifetime the successful reversal through Constitutional amendment, of the 1973 Roe v. Wade Supreme Court enactment of the “right to kill” unborn children.

People don’t always act according to their conscience, but ameliorations in conscience are a sine qua non for moral betterment—necessary, although not sufficient.

Hypocrisy is inevitable as people awaken to moral truths. There are those who condemn genocide but promote abortion, and those who condemn slavery but treat others as servile means to ends. These quests for “justifiable” substitutes for gross evils can be understood as the homage vice pays to virtue. Their conscience would recoil from the overt acts. They shrink from the true words to describe what they do. It is time to make them hear themselves.

Howard P. Kainz is professor emeritus at Marquette University. He is the author of several books, including Natural Law: An Introduction and Reexamination (2004), The Philosophy of Human Nature (2008), and The Existence of God and the Faith-Instinct (2010). Image from Wikimedia Commons .