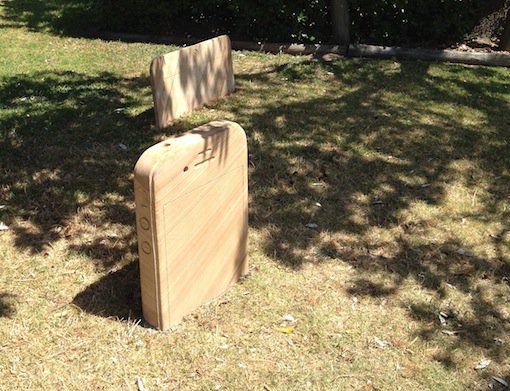 Jon Berkeley’s illustration for a January 2010 Economist cover depicts Steve Jobs as a modern Moses with a saintly halo. One of his trademark black turtlenecks peeks through his biblical robe, as Jobs displays an iPad instead of the twin stone tablets of Exodus. Joan Schneider, a publicist, told Harvard Business Review in 2010 that Jobs was like a specter, which “appears when there’s something big going on and then fades back from view. It almost gives you goosebumps when you see him.”

Apple’s Nativities are much more hyped than its Passions. As Apple developed a storied habit of manufacturing artificial need for new devices that weren’t necessarily all that different from the products they were designed to replace, it also created an environment where those “old” devices became virtually invisible. The question of what happens to mobile devices after they’ve outlived their shelf life is the subject of Sydney artist Lucy Barker’s sculpture “What Once Was,” which was on view at Sculpture by the Sea at Bondi Beach from October 24 to November 10, 2013.

Each of the six sculptural pieces—oversized sandstone versions of an iPhone 4S, an iPod Shuffle, an iPod Mini, an iPad 3, a Macbook Pro, and a computer mouse—measures about four feet by two-and-a-half feet, and half an inch thick. Barker stuck each “device” into the ground—submerged, as in quicksand—in a manner that suggested a tombstone, or as Steve Dow, of the Sydney Morning Herald, put it, an “iStone cemetery.”

“I could see around me how everyone’s identities are becoming so wrapped up in these devices, and in the process, [they are] kind of losing touch with other aspects of themselves,” Barker explained as she installed her work on October 23. “It could be a graveyard, or it could be a rubbish dump, or it could be debris, or it could be floating trash somewhere, or it could be a deserted town sort of thing. I wanted it to be more open ended than that and not as regimented.”

Barker intentionally selected sandstone, a material which Aboriginal artists used for their carvings, and she used a grinder and a multi-tool to create the work. “I really wanted that ancient material to symbolize the whole sort of lost civilization,” she said. “I really did want to do it by hand.” In an artist statement on her website, Barker wrote that sandstone evoked Stonehenge, the Aztec ruins, Egypt’s pyramids, temples, and other sorts of houses of worship.

The Apple devices she sculpted—which she called “icons of design and of lust and of this desire for technology”—were the most obvious choice, she said. And Apple products remind Barker of the duality of technology; as people become more and more connected through their smartphones, they are often secretly lonely at the same time.

By building an Apple graveyard, the artist also sought to highlight the “whole waste issue.” Although iPhones and iPads may have this “huge inflated importance in our lives,” she said, “We just discard them when the next thing comes.” What, she wondered aloud, are we going to leave behind?

But there’s also playfulness in the work in addition to foreboding. Barker, who is currently enrolled in a master’s in digital design program at University of Canberra in Australia, said she loves the idea that viewers who come to Sculpture by the Sea will snap photos of her Apple cemetery on their smartphones.

“I was worried that maybe I did space them out a little bit too much, but I really wanted people to be able to walk around them, because some of them, if you’re on the backside, really are quite subtle,” she said.

By embedding those graven images in a quiet, meditative spot that invites reflection on the mortality of those iconic objects, “What Once Was” invites viewers to consider simultaneously both the aesthetic beauty of the mobile devices and their limitations. They are, the sculpture reminds us, after all only tools.

Menachem Wecker is a freelance writer based in Chicago. He visited “What Once Was” on a trip supported by Destination NSW, a tourism bureau of the Australian state.