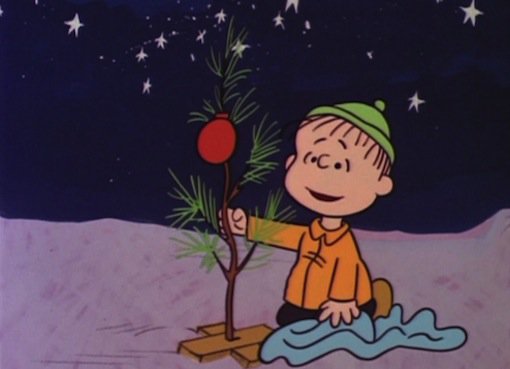 In A Charlie Brown Christmas , Charlie Brown’s quest to escape a melancholy brought on by the materialism and artificiality climaxes with Linus’ powerful recitation of St. Luke’s nativity. Remembered now as a classic, the success of the special was by no means assured.

Linus’ famous minute in the spotlight did not spring from some halcyon days of yore when religious content was openly embraced by Hollywood. As David Michaelis summarizes in his masterful 2007 biography Schulz and Peanuts :

Network broadcasting in the three-channel world of the early 1960s was driven by a single, impossible mission: to please everyone and offend no one . . . . So far as the world of national entertainment was concerned, religion—or, more exactly, religious differences—did not exist.

Michaelis researches and tells the story well, and what follows is largely drawn from his work.

Schulz insisted on the scriptural content in the face of nervous creative partners and queasy network executives. “The Bible thing scares us,” said one CBS vice-president after an early screening. Yet, Frank Stanton, then the president of the network, was supportive, though he would recall that some of his skeptical colleagues “thought I had really flipped.”

The story was a simple one, delivered in an understated way. Charlie Brown is down. His friends’ quest for presents and the best decorated house (or doghouse) seems to miss the point, but he’s not sure what the point is anymore. Exasperated, he exclaims, “Isn’t there anyone who knows what Christmas is all about?” His friend Linus then poignantly reminds everyone that the day is about the birth of a “savior, who is Christ the Lord.” Overcoming a final setback, Charlie Brown returns to a welcoming throng singing “glory to the newborn king.”

The show ran on December 9, 1965. The next day, as Michaelis quotes a New York adman, “all heaven broke loose.” The ratings were great and the critics effusive in their praise for the look, the message, and the score of Vince “Dr. Funk” Guaraldi, whose subtle jazz piano soundtrack would be hailed as ground-breaking. Schulz, no great fan of the genre, had merely tolerated the music, choosing to draw his line in the sand over the script, producing in Linus’ oration what one prominent paper proclaimed “the dramatic highlight of the season.” A Charlie Brown Christmas would go on to garner a Peabody Award, an Emmy, and launch a long string of successful animated Peanuts specials. It has been on the air annually ever since.

As his fame mushroomed in the 1960s, Charles “Sparky” Schulz was often put on a pedestal by evangelical Christians happy to have an important culture maker they could call their own. Robert Short’s The Gospel According to Peanuts , first published in late 1964, would sell several million copies; and Schulz was glowingly profiled by Christianity Today in an issue that would hit the newsstands just days before the Christmas special hit the airwaves. While not publically disavowing his saintly image, Schulz would eventually drift far from the faith of his young adulthood.

Schulz was roundly described as a fervent believer after his 1948 baptism into the Church of God at age twenty-five. He also admired Billy Graham and attended the preacher’s 1957 New York City crusade, later lending his own celebrity to the cause in 1963 when Schulz talked of “Christian living” in Graham’s Decision magazine. Consistent tithing from his growing fortune sustained the First Church of God in Minneapolis for many years.

After moving his family to northern California in 1958, however, his church participation would wane while marital strife and religious doubts would rise. In 1968, fearful of the potential damage to his reputation and lucrative cartoon empire, Schulz shuttled his oldest daughter—then eighteen, troubled, single, and over three months pregnant—off to an abortion mill in Japan. Another daughter, Amy, later to become a Mormon, would recall her father regularly reading scriptures silently to himself but noted, “He didn’t share it with us.” She was twenty-two before she ever opened a Bible.

As his biographer put it, “Between 1965 and 1975, Schulz underwent a transformation.” He emerged as what we might today call spiritual but not religious, fearful of the institutional church and not even confident enough in his beliefs to instruct his children. Daughter Amy recalled that their California home was decorated at Christmas time with a tabletop crèche but, unlike Linus in the 1965 Christmas special, “No one ever told us what it was for.”

Schulz, often beset by financial worries, would pioneer the mass marketing of his characters. The Charlie Brown of 1965 lamented his canine’s prize winning decorations saying, “My own dog, gone commercial!” Today, Snoopy’s likeness regularly floats over sporting events hawking life insurance, and at this time of year you can even buy a plastic version of the puny natural Christmas tree that Charlie Brown rescues in the special. Yet, despite its incorporation into the very sea of commercialism that it bemoaned, A Charlie Brown Christmas is still a gift that keeps on giving. For many, it is the only time they will hear the Incarnation narrative amid the holiday hype and Ho, Ho, Ho’s.

In the most recently produced Christmas cartoon demonstrating some TV shelf-life, another round-headed, socially awkward character looks for the true meaning of Christmas. However, for 2007’s Shrek the Halls, “the Christmas story” turns out to be ’Twas the Night Before Christmas, and the closest it comes to religion is a Hallelujah chorus sung to a massive image of Santa. In its finale, the now festively enlightened green ogre proclaims, “A smelly Christmas to all, and to all a gross night.” For my part, give me Linus, the second chapter of Luke, and the Peanuts gang singing “Hark! The Herald Angels Sing” for another fifty years, please.

John Murdock, after a decade spent as an attorney in the DC Beltway, is now writing a book on Christian environmental stewardship from an ancestral farmhouse in Texas. He blogs at republicantreehugger.blogspot.com .