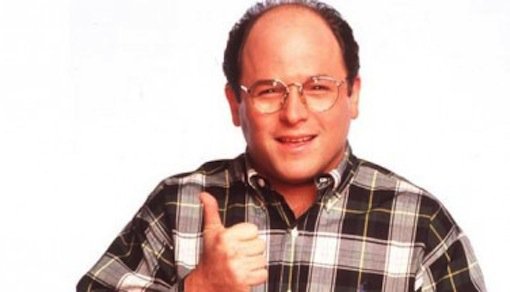 A frenzied George, who has promised to pick up Jerry from the airport, is anxiously checking the arrivals board at JFK. He asks a well-dressed businessman next to him for the time, in response to which the man mutters something about a clock over in the corner. Despite sporting a bold gold watch, which he waves in George’s face while pointing him towards the wall clock, the man refuses to check his wrist and tell George the time. The man eventually leaves angrily as George yells after him, “You know we’re living in a society !”

Seinfeld has been described as nihilistic, perhaps because whereas shows like The Honeymooners and Andy Griffith tended to end with neat and morally pedagogical denouements Seinfeld relies on the moral complacency and persistently disordered desires of its main characters in order to stumble from one episode to another. “No hugging, no learning,” was one of the principles of the show’s producers. Indeed, on the surface the show is little more than a running catalogue of the sexual and social misadventures of four materialistic and self-centered Manhattanites. Thus the New Republic ’s Leon Wieseltier humorlessly and nastily labeled the show “the worst, last gasp of Reaganite, grasping, materialistic, narcissistic, banal self-absorption.”

Such criticisms of Seinfeld miss its particular genius. George’s outburst at the airport motions towards something more interesting than “narcissistic, banal self-absorption.” Seinfeld is, above all, a latter day comedy of manners—an attempt for four moderately intelligent, outwardly normal, and well intentioned but morally compromised individuals to survive the various rituals, foibles, and idiosyncrasies of modern urban life. In exploring that narrow space between civilization and barbarism in which we make our daily lives, Seinfeld directs our attention to the importance of custom.

More than the others, however, George Costanza serves as the show’s best reminder of the importance of manners, of order. When George demands the stranger share the time with him, or, later on that same episode, when he adamantly declares that “you cannot abandon people in the middle of an airport pickup—it’s a binding social contract,” he is invoking and insisting upon the many and often Byzantine non-legal rules that mark us as civilized creatures. Other characters and plotlines in the show play with this theme, of course, but with George it appears to be an obsession (one that apparently extends even to animals, as when he suspects that New York’s pigeons are purposefully refusing to get out of his way).

George grasps that in political life—i.e., life lived in community—there are rules, he even prides himself on knowing or discerning those rules (as when he schools Jerry on what various types of greetings may mean romantically), but he seems to uphold these rules under constant duress, and dreams of slipping free of the bounds of politeness (“I would drape myself in velvet if it were socially acceptable,” he repeatedly tells Jerry).

Montaigne held that “Each man [holds] in inward veneration the opinions and the behavior approved and accepted around him,” but in George we see a man who holds custom in high esteem without a shred of inward veneration. In one instance, when George perceives his life to be in danger, he madly rushes out of a burning room, pushing children and elderly women out of the way, obviously abandoning all pretense of civility; he then weakly tries to defend his actions by saying he was clearing a way for them. Custom, then, is a delicate thing, useless without a robust moral grounding.

This is a great vice, but it also has its virtue. George, alone among the characters in Seinfeld, seems able to both acknowledge and resist custom, to see the ultimate artificiality of the social structures according to which he lives. Finally, George Costanza is a tragic character: He possesses enough awareness to realize his own position as the subject of a particular regime and set of customs, but not enough virtue to either accept those customs or successfully transcend the political. The reasons for this could be many—weak character, bad parenting, poor moral education—but it seems clear, at least, that George is and will remain stuck where he is.

If we were to try to learn from George, we might recognize that to seek full human flourishing, we cannot look merely to the political nor the rational but must turn elsewhere, to the mystical or religious, for instance. In giving our allegiance to an otherworldly source of moral authority, we relativize and reembrace custom, finding a way out of George’s hellish life of aspiration and distress.

To varying degrees, we all face George’s challenge: making meaning in an often strange and vexing society. But his flight from duty and his morally deracinated machinations, and the failures they bring, can prove instructive. Precisely because George’s and his friends’ failures are presented as such, Seinfeld ought not to be written off as nihilistic fluff, for it ultimately makes all too clear to us the banality of egoism.

Travis LaCouter graduated from the College of the Holy Cross.