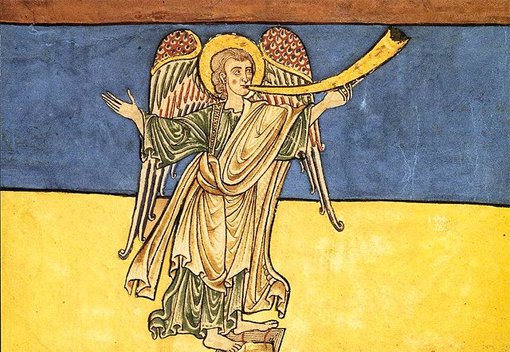 In one of his later essays, Jacques Derrida identified a “newly arisen apocalyptic tone in philosophy,” and in the decade since his death, that tone has become a tumult. René Girard’s latest is a shrill warning about the end of European civilization. Slavoj Zizek hears the hoofbeats of four horsemen: environmental destruction, biogenetics, imbalances in global capitalism, and “the explosive growth of social divisions and exclusions.”

Apocalyptic infuses theology more today than at any time since the Reformation. Cyril O’Regan discerns apocalyptic themes in Catholics like Balthasar, Protestants like Moltmann and Altizer, Orthodox thinkers like Sergei Bulgakov, and Radically Orthodox Anglicans. (Apocalyptic Anglicans—take a moment to absorb the full bouquet of that.)

Apocalyptic is no longer the province of wild-eyed longhairs who hold up signs on street corners or who rant on YouTube. Or perhaps the longhairs and ranters have finally gotten tenure.

Contemporary apocalyptic isn’t always about the end of the world; it isn’t necessarily theistic. The Greek word apocalysis means “unveiling.” As they unmask, apocalyptic philosophies chasten knowledge, putting our certainties in the harsh light of a messianic moment that may never come or may only arrive, as in Walter Benjamin, as a flash of lightning in the darkness. “Apocalyptic” describes a mode of thought that emphasizes disruption and eruption, sharpens divisions, and imposes a stark either-or. It’s a weapon for radicals in their resistance to totalizing systems, stable institutions, smooth progress, and the status quo.

Though marginalized for several centuries, apocalyptic has always been indispensable in the mainstream Christian tradition. The biblical canon ends with the book titled “The Apocalypse,” there are apocalyptic elements in Irenaeus and Lactantius, and even Augustine is not as thoroughly non-apocalyptic as many have thought. O’Regan points out that Joachim of Fiore’s late medieval millennialism left its mark even on those who opposed him, like Bonaventure, and Protestantism was born in an age of apocalyptic turbulence.

I was reminded of the apocalyptic shape of orthodoxy when, taking a break from researching a paper on contemporary apocalyptic, I attended a performance of C. S. Lewis’ The Great Divorce put on by the Fellowship for the Performing Arts at the gorgeously restored Alabama Theater in downtown Birmingham.

Lewis’ allegory is, from one angle, an anti-apocalyptic rebuttal to the overheated visions of William Blake’s “The Marriage of Heaven and Hell.” The temptation to join opposites is a “perennial” one, and Lewis’ book delivers the divorce papers to “the belief that reality never presents us with an absolutely unavoidable ‘either-or.’” In attacking Blake’s heretical apocalypse, Lewis offers an apocalyptic orthodoxy. In contrast to Derrida’s “apocalypse sans apocalypse,” Lewis emphasizes the necessity of ends, which means both “closure” and “purpose”: Lives that never close in on a final gladness wander in a senseless waste.

When the story starts, ghosts are assembled at the bus stop in Grey Town, a city where neighbors daily quarrel and move farther and farther away. Since the residents can build houses by imagining them, the city spreads into an infinite urban sprawl. For some ghosts, this expansion represents progress, all the more progressive for being purposeless. For Lewis, it’s a vision of Hell.

The narrator meets the ghost of a painter who talks airily of his interest in “paint for its own sake.” Another ghost, formerly a liberal Episcopalian bishop, doesn’t care to see the face of God because that would bring an end to his searching: “For me there is no such thing as a final answer.” The solid spirit-being who converses with him urges him to become like a child who asks questions because he wants answers.

Permutations on the theme appear in Lewis’ painfully recognizable portraits of everyday vices. A possessive wife can’t give up her husband for the pleasures of heaven because she wants someone “to—to do things to.” Professing her belief in a God of love, a grieving mother demands to have her son, even if it means taking him back to Hell. A lover leading his tragic self on a leash cannot let go of the delicious loss that has defined him for so long, and another man agonizes over renouncing his besetting sin, the writhing lizard he carries everywhere.

The spirit of George MacDonald explains to the narrator that the damned are like “a spoiled child that would sooner miss its play and its supper than say it was sorry and be friends.” When a child acts out, he’s in the “Sulks,” but adults create elaborate justifications for their tantrums: “In adult life it has a hundred fine names—Achilles’ wrath and Coriolanus’ grandeur, Revenge and Injured Merit and Self-Respect and Tragic Greatness and Proper Pride.”

With relentless moral logic, Lewis unmasks the absurd effort to evade finality, even when that finality promises eternal satisfaction of all desires. Ghosts dither in indecision in a moment that demands choice; they cling when they can reach their end only by letting go. They think they can put it off, and so they remain ghosts. His stern message is that human beings who don’t accept final joy are in a state of living death. The refusal of apocalyptic is itself Hell.

Peter J. Leithart is president of Trinity House. He is the author most recently of Gratitude: An Intellectual History, forthcoming from Baylor University Press. His previous articles can be found here. Image from Wikimedia Commons.