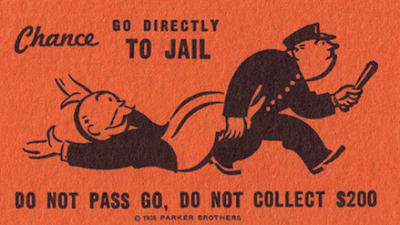 If we are not careful, health care reform will become the convenient excuse to permit government intrusion into almost every aspect of our lives. Now, it appears that it may even become a matter of criminal law. From the story:

Sen. John Ensign (R-Nev.) received a handwritten note Thursday from Joint Committee on Taxation Chief of Staff Tom Barthold confirming the penalty for failing to pay the up to $1,900 fee for not buying health insurance. Violators could be charged with a misdemeanor and could face up to a year in jail or a $25,000 penalty, Barthold wrote on JCT letterhead.

That kind of coercion is a problem for me: Requiring everyone to buy insurance is intended to keep premiums down by spreading the risk to the young and healthy who will need fewer services.  But legally mandating that everyone buy insurance is not only of questionable constitutionality, but comes at the significant cost of increased bureaucracy, government intrusiveness, and unnuanced heavy handedness.

Moreover, since we don’t have enough doctors to care for the 30 million legal residents who the president says lack coverage, and we are told that millions want to be covered but can’t afford it, wouldn’t we be better off opening the entire country to health insurance competition—which will bring down premiums—permitting people to join voluntary exchanges to harness the power of numbers to negotiate good deals, and enacting individual tax deductibility and vouchers for the less affluent to help make it affordable?  That would dramatically increase the number of people insured, be cheaper for the country than the current behemoth, and promote freedom of choice.

It would have one significant drawback for our keepers, though: It would not open the door to more government control and taxation, and make no mistake, increasing government/bureaucratic power over all of us is as much of what this debate is about as increasing access to health care. I think that’s why the POTUS/Pelosi/Reid troika will never move in that more reasonable and affordable direction unless forced by political exigencies.
0
Print
Email
Prev Article
Next Article