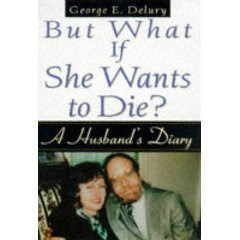 Democracy means nothing any more. The UK Parliament repeatedly refused to legalize assisted suicide.  Then, a woman with MS named Debbie Purdy wanted to be able to go to Switzerland to kill herself, with her husband in attendance. So she sued.  The Lords—the UK’s supreme court—ruled that she had a right to know whether her husband would be prosecuted and ordered the prosecutor to publish guidelines as to when the law would and would not be enforced.

The prosecutor has gone beyond the court ruling and decriminalized assisted suicides  in country committed by friends and relatives of people with terminally illnesses and serious disabilities.  From the story:

HELPING terminally ill and incurably disabled patients to commit suicide is set to be decriminalised in Britain under guidance to be issued this week. Those who assist a friend or relative to end their lives on compassionate grounds will not be prosecuted, under guidelines to be announced by Keir Starmer QC, the director of public prosecutions. However, it will still be a crime to act as “ringleader” or “organiser” of the death of a person who has been “vulnerable to manipulation”. The guidelines are expected to make clear the difference between someone “assisting” and someone “encouraging” a suicide.

1. This further proves assisted suicide is not about terminal illness.

2. This further proves that assisted suicide isn’t a medical act.

3. It is another illustration how the rule of law is crumbling.

4. It sends a loud message that the lives of the terminally ill and disabled are not as worth protecting as those of other people.

5. Principle means almost nothing any more. All that matters is how a person feels in a given situation (which we also see in other areas of concern to SHS).

6. This fiat will guarantees the exploitation and abusive deaths of at least some vulnerable people.  In this regard, let us remember the case of George Delury who assisted the suicide of MS patient Myrna Lebov, supposedly because she couldn’t stand the suffering caused by her disability. After he pleaded guilty and received a slap on the wrist from the court investigative journalism and the publication of  his diary showed that far from being compassionate, DeLury wanted Lebov dead to cure his misery.  Here’s an excerpt of my description of the case from Forced Exit (citations omitted):

The lid blew off Delury’s claim of selfless altruism when the New York district attorney’s office released the contents of his diary.  It revealed that Lebov did not have an unwavering and long-stated desire to die, as he had alleged.  Rather, as often happens with people struggling with serious illnesses, her moods waxed and waned.  One day she would be suicidal but the next day, Delury’s diary revealed his wife wanting to engage in life.  Moreover, the diary clearly demonstrated that it was Delury, not Lebov, who had the unremitting suicide agenda.

Delury admitted that he encouraged his wife to kill herself, or as he put it, “to decide to quit.”  He researched her antidepressant medication to see if it could kill her, and when she took less than the prescribed amount, which in and of itself could cause depression, he used the surplus to mix the poisonous brew that ended her life.

But he went further than that.  He helped destroy her will to live by making her feel worthless and a burden on him...On March 28, 1995, Delury wrote in his diary of his plans to tell his wife the following: “I have work to do, people to see, places to travel.  But no one asks about my needs.  I have fallen prey to the tyranny of a victim.  You are sucking my life out of my [sic] like a vampire and nobody cares.  In fact, it would appear that I am about to be cast in the role of villain because I no longer believe in you.” Delury later admitted on the NBC program Dateline that he had shown Lebov this very passage...

Finally, on July 4, Delury got what he wanted: his wife’s death.  After postponing an earlier suicide date that her husband had advocated, the couple’s anniversary, Lebov swallowed the overdose of antidepressant medicine that her husband prepared for her, and died.  George Delury did not wait for her death by her bedside, but according to his diary, went into another room and went to sleep.  The next morning he wrote, “Slept through the alarm.  It’s over.  Myrna is dead.  Desolation.”

In the UK, this case would not be prosecuted—unless the diary was discovered, since Delury had convinced the media and law enforcement that his motive was noble.

Mark my words, this decriminalization is only the beginning.  Purdy, the court, and the prosecuter have flung the UK off a sheer moral cliff that will dash the sanctity/equality of human life ethic on the sharp rocks of legalized euthanasia and death on demand.  Culture of death, Wesley? What culture of death?
0
Print
Email
Prev Article
Next Article