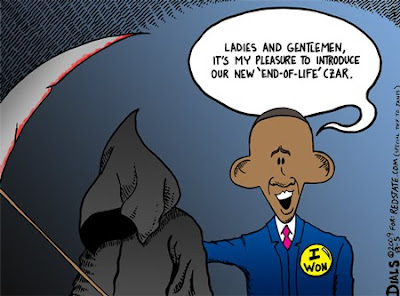 The Canadians may put up with bureaucrats telling them what medicine they can and cannot receive—but we in the US are not so passive.  Alas, we could become so if Obamacare passes and we let centralized rationing boards to take control of our entire health care system.  If we do, in about ten years, we will begin to see stories such as on reported  in today’s Globe and Mail that tells the terrifying story of young women, who need a combination of drugs to fight pulmonary disease, being told—Nyet! And now, as a direct consequence, one woman is close to death. From the story:

Bonnie Cameron and Cindy Waters-Goodman do not know each other, but they have much in common. Both are feisty, small-town Ontarians who were young, busy mothers when hit with diagnoses of pulmonary arterial hypertension, an incurable heart and lung disease...Both were started on a regimen of drugs that are costly but slowed the pace of the disease, which is uncommon and often goes undetected. The province paid much of the tab, which the women estimate was about $100,000 a year each. Their lives improved drastically: They could play with their kids, cook meals and shower without fainting.

Then, last spring, out of the blue, both received letters informing them the province would no longer allow more than one medication. To continue receiving support, they’d have to stop taking combos.

After much lobbying, Ms. Waters-Goodman won a reprieve and can stay on her combination of drugs for one more year. Ms. Cameron wasn’t so lucky. Forced to give up her secondary medication, she has suffered greatly, and this week slipped into critical condition after being moved to hospital in Toronto. With an intravenous line in her neck and several failing organs, she seesaws between life and death.

If an HMO tried to do that here, it would not stand.   The screaming would justifiably never stop and government regulators would join fight on the side of  the patient. But if we permit centralized cost/benefit/best practices panels—the regulators will switch sides and work on behalf of the cost cutters. Indeed, once we allow centralized cost/benefit panels—which would be run by pro-rationing utilitarian bioethicists—to take charge of both private and public medical decisions, we will end up in the Canadian soup:

The decision, made by the province’s Committee to Evaluate Drugs, alarmed patients and frustrated their doctors.”There’s no question that we cannot do as well in Ontario now for our patients as other places in Canada,” said Dr. Sanjay Mehta, a PAH specialist in London. “This is a human issue. If someone is in front of you doing badly on the first drug, do you just sit and watch until they die?”

Apparently so.  That’s what happens when health care is rationed.

We are constantly told health care is a “right.”  But under Obamacare, it will be a revocable right to those most in need of its exercise.  We have been warned.  Death panels anyone?
0
Print
Email
Prev Article
Next Article