[Note: While I had intended to avoid writing any more about atheism for a long, long time, I thought I’d add just a couple of more posts on the topic. It tends to be a bit slow around here on the weekend so I thought it couldn’t hurt to extend the conversation for one more day.]

You have to pity the modern atheist who attempts to present arguments for her cause. Unmoored from any respectable intellectual tradition, each generation is forced to recreate anti-theistic arguments from scratch. The result is that the claims which they believe to be clever and damning often turn out to be—to use a technical philosophical phrase—just plain silly. 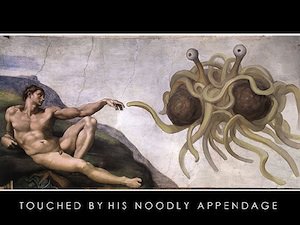 Take for example, the Flying Spaghetti Monster . According to Wikipedia, The Flying Spaghetti Monster is the deity of a parody religion founded in 2005 by Oregon State University physics graduate Bobby Henderson to protest the decision by the Kansas State Board of Education to require the teaching of intelligent design as an alternative to biological evolution. In an open letter sent to the education board, Henderson professes belief in a supernatural Creator called the Flying Spaghetti Monster, which resembles spaghetti and meatballs. He furthermore calls for the “Pastafarian” theory of creation to be taught in science classrooms, essentially invoking a reductio ad absurdum argument against the teaching of intelligent design. (The FSM has been popularized by the otherwise charming and intelligent folks at BoingBoing .)

What Henderson actually showed was (a) a profound ignorance of the design argument, (b) a profound ignorance of what the Kansas board was actually proposing, and (c) that OSU should require physics graduates to take courses in philosophy. But what Henderson was trying to get at, though he doesn’t seem clever enough to grasp his own point, is similar to what Bertrand Russell was arguing with his “celestial teapot” analogy. In the famous passage from “ Is There a God? ”, Russell writes:


If I were to suggest that between the Earth and Mars there is a china teapot revolving about the sun in an elliptical orbit, nobody would be able to disprove my assertion provided I were careful to add that the teapot is too small to be revealed even by our most powerful telescopes. But if I were to go on to say that, since my assertion cannot be disproved, it is intolerable presumption on the part of human reason to doubt it, I should rightly be thought to be talking nonsense. If, however, the existence of such a teapot were affirmed in ancient books, taught as the sacred truth every Sunday, and instilled into the minds of children at school, hesitation to believe in its existence would become a mark of eccentricity and entitle the doubter to the attentions of the psychiatrist in an enlightened age or of the Inquisitor in an earlier time.


Russell’s rather unoriginal argument has recently rehashed by atheism’s most unoriginal apologist, Richard Dawkins. Both Russell and Dawkins (and everyone else who uses this line of reasoning) attempt to argue along the lines that “If the existence of X (celestial teapots, FSMs, God) has not been disproven, it does not follow that X exists, or even that it is reasonable to believe that X exists.”

This point is both obvious and uncontroversial. The problem comes when they try to suggest, as philosopher William Vallicella says, “that belief in God (i.e., belief that God exists) is epistemically on a par with believing in a celestial teapot. Just as we have no reason to believe in celestial teapots, irate lunar unicorns (lunicorns?), flying spaghetti monsters, and the like, we have no reason to believe in God.”

Vallicella points out the key problem with this thinking: we have all sorts of reasons for believing that God exists . True, atheists may not find them compelling. But so what? “The issue is whether a reasoned case can be made for theism, and the answer is in the affirmative,” says Vallicella. “Belief in God and in Russell’s teapot are therefore not on a par since there are no empirical or theoretical reasons for believing in his teapot.”

The Flying Spaghetti Monster, however, is akin to God in that it is posited as a being that creates contingent beings. As Henderson claims in his letter, “We have evidence that a Flying Spaghetti Monster created the universe.” If the FSM created the universe then the universe is radically dependent on the FSM. As I pointed out in my previous post , if the universe was created into existence then it is possible for the entire universe to go out of existence, to simply cease to exist. Its continued existence therefore requires a causal agent to keep it from ceasing to exist, to prevent its exnihilation . (Note: This would be true even if the universe has always existed and was uncaused (i.e., the view of steady-state cosmology).)

In his attempt to be clever, Henderson misses the point that his FSM is more philosophically plausible than what (I suspect) he actually believes. Presumably since he is a physicist, Henderson believes either that the universe was created from nothing (everything from nothingness) or that he subscribes to some alternate view such as the multiverse theory. The idea that (a) absolute nothingness (non-existence) created the universe and that (b) this nothingness sustains the universe from exnihilation (complete non-existence) is philosophically and scientifically absurd.

That leaves us with the second option, that the universe was created by something else, such as a Perpetual Universe Generator (PUG). In essence, the PUG plays the same roles as God or the FSM. Each is an entity that exists non-contingently and resides outside of the normal laws of the known physical universe. (The FSM is a creature comprised of stringy noodles while the PUG is a construct comprised of noodly theories about strings.) The only difference is that Henderson is positing an un-intelligent designer (nothingness, the PUG) while the alternatives are intelligent designers (the FSM, God).

Why exactly we are to prefer an unintelligent designer to an intelligent one is one of the questions that remains unanswered. Obviously, not all atheists believe that arguments must be intelligently designed; but that does not mean that all arguments for intelligent design* are without merit. Perhaps if they used their noodles for something other than creating spaghetti creatures they’d see that obvious point for themselves.

(Note: By “arguments for intelligent design” I do not mean merely argument for Intelligent Design theory but all arguments that claim that the the universe was created and sustained by a self-existing Being who possesses intelligence (or, a minimum, a Being that possesses teleological intention and the ability to act in accordance with that self-willed intention). In other words, arguments that are made by almost all forms of theism and deism.)