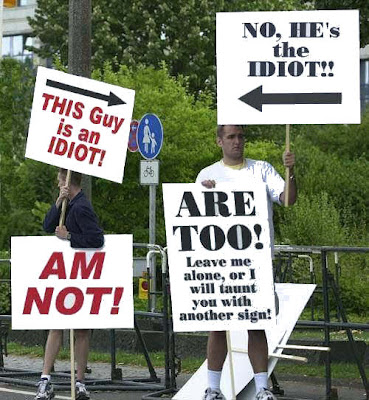 I just read a very detailed—and way too long for me to recount fully here—expose` in Der Spiegel, about Climategate and the bar room brawl between climate warming alarmist scientists (and I don’t meant that pejoratively) and skeptics.  It is a very important article and anyone interested in global warming should read the whole thing (linked below).

It is clear throughout where the sympathies of the writer and magazine lie—and it ain’t with skeptics.  For example, it excoriates much of the push back as an industry propaganda blitz and accuses the skeptics of starting the rumble by attacking the work and integrity of the alarmists.

And that is precisely why its reporting on Climategate is so damning—and indeed, reads like Nixon in full paranoia attack mode—with efforts made to fudge the science for PR and political effect. For example, the (in)famous “hockey stick” graph was intentionally made the face of global warming—even though the scientists responsible knew it didn’t take the Medieval warming period into account—which could not have been our fault.

Most disturbing is the major effort made by a small group of very powerful scientists to prevent skeptics from being published in peer reviewed journals and attacks on editors that published opposing views—sometimes costing the editors their jobs.  Talk about making sure you have no competition!

The point of keeping skeptics out of peer reviewed journals—and the same tactic has been employed in the stem cell and Darwin debates—is to then mock them for not having published peer reviewed studies—when the taunters’ own ruthless actions ensured the heterodox articles had little chance of being accepted.  Very insidious and a total corruption of science and the scientific method. From the article, “How the Science of Global Warming Was Compromised:”

The two sides became increasingly hostile toward one another. They debated about whom they could trust, who was a part of their “team” — and who among them might secretly be a skeptic. All those who were between the two extremes or even tried to maintain links with both sides soon found themselves under suspicion. This distrust helped foster a system of favoritism, as the hacked e-mails show. According to these, Jones and Mann had a huge influence over what was published in the trade press. Those who controlled the journals also controlled what entered the public arena — and therefore what was perceived as scientific reality...It’s well-known that renowned scientists can gain influence within journals. But it’s a risky business. “The danger that deserved reputations become illegitimate power is the greatest risk that science faces,” Weingart says.

In one described example, “the hockey team,” as the alarmist faction called themselves, may have stifled two articles critical of tree data from Siberia—but the critics later proved to be right. Even worse than preventing critical studies from being published was the attack on journal editors who published heterodox articles:

A study published in Climate Research in 2003 looked into findings on the current warm period and the medieval one, concluding that the 20th century was “probably not the warmest nor a uniquely extreme climactic period of the last millennium.” Although climate skeptics were thrilled, most experts thought the study was methodologically flawed. But if the pro-climate-change camp controlled the peer review process, then why was it ever published?

In an e-mail dated March 11, 2003, Michael Mann said there was only one possibility: Skeptics had taken over the journal. He therefore demanded that the enemy be stopped in its tracks. The “hockey team” launched a powerful counterattack that shook Climate Research magazine to its foundations. Several of its editors resigned...

Yet there were also limits to the influence had by Mann and Jones, as became apparent in 2005, when relentless hockey stick critics Ross McKitrick and Stephen McIntyre were able to publish studies in the most important geophysical journal, Geophysical Research Letters (GRL). “Apparently, the contrarians now have an ‘in’ with GRL,” Mann wrote to his colleagues in a leaked e-mail. “We can’t afford to lose GRL.” Mann discovered that one of the editors of GRL had once worked at the same university as the feared climate skeptic Patrick Michaels. He therefore put two and two together: “I think we now know how various papers have gotten published in GRL,” he wrote on January 20, 2005. At the same time, the scientists discussed how to get rid of GRL editor James Saiers, himself a climate researcher. Saiers quit his post a year later — allegedly of his own accord. “The GRL leak may have been plugged up now,” a relieved Mann wrote in an e-mail to the “hockey team.”

That is a direct assault on the scientific method, and as such, is a scandal of the highest order—especially considering the kind of Draconian compromise of national sovereignty, the economy destroying policies, and redistribution of the wealth schemes that hysterics tried to pull off at Copenhagen.

The article finishes with some wisdom—the science of global warming will always be uncertain:

However, it seems all but impossible to provide conclusive proof in climate research. Scientific philosopher Silvio Funtovicz foresaw this dilemma as early as 1990. He described climate research as a “postnormal science.” On account of its high complexity, he said it was subject to great uncertainty while, at the same time, harboring huge risks.

In other words, catastrophic, human-caused global warming is not—contrary to repeated assertions by hysterics—a “fact.”

Still, why not invoke the precautionary principle, and take drastic action—just to be safe?  Because, hysteria has led to proposed cures that are worse—or at least as bad and more immediate—than the potential disease.  Fudging data, blackjacking the careers of editors in science journals, and engaging in blatant panic mongering will not change that truth.
0
Print
Email
Prev Article
Next Article