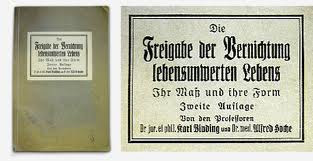 It is very tempting sometimes to fall back on the Nazi analogy.  And occasionally, there is a legitimate equivalence, as in the call for euthanizing disabled infants, which was not specifically a “Nazi” program but promoted enthusiastically by a German medical establishment that had swallowed the eugenics poison in one gulp.  Yes, Peter Singer’s ideas in this regard are chillingly similar to the justifications made for the medical murder of  Baby Knauer, the first known victim of the medical Holocaust.  But Singer doesn’t want mandatory reporting of babies born with disabilities to the authorities, nor does he support the secret killing of babies—which was how the Germans mostly did it. Nor would he support the T-4 program that served as the rehearsal to the Holocaust by testing cyanide showers.  Indeed, Singer would be utterly appalled by such a program.

Apparently, an article juxtaposing today’s abortion/euthanasia arguments with the Nazis was published in the Vatican’s official newspaper.  From the Daily News story:

The Vatican’s semi-official newspaper has angered supporters of euthanasia and abortions by suggesting they apply the same justifications that were used by the Nazis to champion their murderous eugenics programme. The controversial claim that they believe in the survival of the fittest concept, was made in an article on the front page of today’s issue of L’Osservatore Romano. It was published in response to the recent Italian translation of a 1920 book titled Allowing the Destruction of Life Unworthy of Living, by two German scholars, Karl Binding and Alfred Hoche.

But as I noted in Culture of Death, Hoche and Binding weren’t Nazis.  In 1920, no one would have believed that the then minuscule National Socialists would rise to power.  Both were noted intellectuals—Binding was a well known law professor and Hoche a physician considered quite the humanitarian—which is why the book had such influence.  Yes, it was utterly pernicious and poisoned the German body politic along with other eugenics advocacy. And there are certainly echoes of B and H in contemporary advocacy in the categories of the killable the authors created, e.g., the terminally ill, the unconscious, and the disabled, along with soothing assurances of “protective guidelines.”  But again, their advocacy wasn’t “Nazi,” which makes it even scarier when you think about it.

Deny human exceptionalism—and its corollary that all humans have equal value—and evil will surely follow. But there are other ways to jump off a moral cliff than giving the Sieg Heil salute, and often comparing such advocacy to The Nazis! actually provides a defense because it simply isn’t true.

The Nazi-controlled democratically elected government did propose legalizing voluntary euthanasia in 1933, but backed off after a strong push-back from the churches.  That doesn’t make modern advocacy “Nazi” either.  Nor did the Nazis promote abortion on demand, but in fact, strictly outlawed it for “Aryan” women.  Moreover, contemporary A/E advocacy is radically individualistic, while the Nazis were totalitarian collectivist. Distinctions matter.
0
Print
Email
Prev Article
Next Article