So our Constitution has been changed again.

What? You say no-one consulted your elected representatives? No amendment was passed?  C’mon, you rube, that’s not the way it works.

What? You’re complaining that in this case, not even five of your indirectly elected-for-life judge-rulers were gathered to sprinkle the traditional word-dust on the change?  Clinging to Ceremony is childish.

The new de facto one is of course not written down anywhere, you moron, but if it were, it would go like this:

. . . [The President] shall take Care that the Laws be faithfully executed, excepting those laws and sections of laws he finds inconvenient, or needing of adjustment . . .

If they’re actually telling the truth that they can’t handle getting employer reporting requirements into place, how are they doing getting the exchange system into place?

. . . The administration’s brazen disregard for and denial of plainly evident problems with Obamacare has been absolutely central to sustaining the morale and dedication of the law’s defenders. If that mask is dropping, they could be in for serious trouble. Moreover, the central proposition of defenders of the law has been that continued conservative opposition to it is a denial of the basic reality that the law is on the books and will be implemented. But apparently, the administration does not think of the law as a done deal. They believe they can pick and choose elements to implement or to ignore, and think the nature of the health-care system in the coming years is still an open question.

But hey, this is going to be a gold-mine for lobbyists, consultants, interest group strategists, etc.:

. . . This concession on the employer mandate also makes other concessions more likely: The administration will certainly face added pressure to ignore various taxes, rules, and mandates that can be shown to have detrimental effects on the economy or on some constituency—and pretty much every line of Obamacare falls into that category . . . They have just announced that they can implement or ignore whatever portions of the law they wish, and so will be feeling lots of pressure from lots of people with lots views about lots of provisions.

Moreover, by announcing that they can implement or ignore whatever portions of Obamacare they want, the administration is also taking even more direct ownership of any other problems that arise with implementation, since this move suggests they believe that implementation is entirely up to them and they are not really bound by the particulars of the law.

So Levin stresses the political silver lining there for conservatives. And, he suggests they help Obama along in delaying implementation, since he thinks that makes the possibility of its full or partial repeal more likely. I wonder what our Pete thinks about that.

But Levin’s words also reveal Obama’s increasingly open willingness to skirt around the rule-of-law and the Constitution. The basic strategy now is revealed: pass massive laws that no-one can read or understand, piled up upon an already groaning mountain of federal statute, and then have the Chief Executive re-carve the actual content of the law out of the existing mass, as a sculptor does with a block of marble. 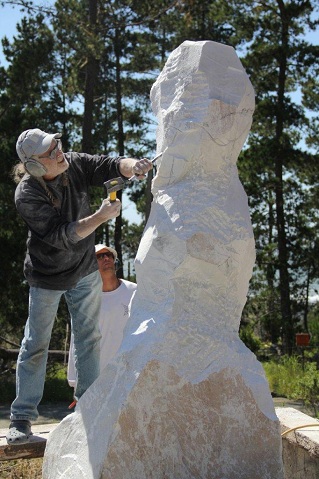 Even if the resulting “statue”, i.e., statute, were to be beautiful and rational, a wonk’s version of reflective equilibrium by trial and error tinkering, it would violate the Constitution’s key feature: the Separation of Powers.

The Presidency does have, via the veto threat and the resultant bargaining, significant “legislative power” to shape the bills voted on.  But that does not extend to the power to shape them once duly enacted. Sure, the character of administrative delegation can make this blurry, resulting in disputes about what the Constitution forbids, so that, by the (wrong) liberal interpretation of such issues, Obama can threaten to use, presumably, provisions of the Clean Air Act, to “declare war on coal.” As Jim Ceaser put it here last Tuesday: Obama promised a package of executive orders and administrative rulings that aim, pretty much, to shut down the use of coal.

A very troubling promise, and in the comments, Jim jokingly indicated how it fits the emerging pattern, the New Normal:

. . . last year Obama pretty much put in place the dream act via executive order, bypassing the legislative process. It’s becoming so much standard operating procedure that the next time congress passes a law and the president signs the headline will be Congress Bypasses Executive Order Enacts Law.

But the promise made to delay enforcement of the employer mandate is even worse, I think, because it’s not a matter of long-debated delegation and bureaucracy-command issues, but open re-writing of the laws . For the deadline is in the legislation itself.

Am I wrong? Please, someone with con-law expertise on the take care clause show me that I am.

We all know that executive resources are limited, and that sometimes laws cannot be actually enforced right away, or ever enforced adequately. But this is not a decision about how hard to try to enforce “provision X,” but an announcement that it is to be ignored. It is a repeal.

We all know that the Democrat-led Congress violated its own law by declining to pass a budget several years in a row. But that was a one-branch failure, whereas this lawlessness is direct Executive encroachment of the Legislative power.

Some may recall that George W. Bush made many “signing statements,” where he announced his intention to ignore certain provisions of laws he regarded as unconstitutional restraints on Executive power. Obama and the Dems denounced these to the skies. I won’t go into the controversy about them here—I basically think they are constitutionally defensible—or into the significance of the fact that Obama began to use them also . Well, what the heck, I might as well display the winning words Obama uttered during the 2008 campaign:

The man’s utter hypocrisy was proven years ago. Very old news. So concentrate rather on the action. Note that whereas Bush utilized signing statements to reject enforcement of provisions he felt were unconstitutional , and thus ones that exposed him to violating his oath of office, Obama cannot say that about the employer-mandate provisions. His action is of a different order. He is doing what he misrepresented Bush as doing, picking and choosing, and entirely for policy reasons, i.e., without the excuse that his oath of office requires the irregularity.

So this is a direct transmutation of executive power into legislative power, contrary to the letter and spirit of the Constitution. What is more, this real shredding of the document follows an established and now-accelerating pattern of actions that, most charitably considered, push the constitutional envelope in this area to the limit.

Again, please, someone prove me wrong here on the con-law merits.

That’s an image of the other J. Caeser, the anti-republican one with the funny spelling. I never have and still do not think that Obama himself has Caesar-like designs. But in his blundering and blustering his way into violation upon violation of our constitutional order, he is setting increasingly frightening precedents, corrupting the Democratic Party, and paving the way for . . . who knows? The man needs a shock to wake him up, as does the nation. A massive DC protest, perhaps centered around a call for Impeachment , might do the trick.

UPDATE: Mario Loyola at NRO is now also onto the existence of the the New Take Care Clause. He points out that Dems sure won’t like it if it gets used by a Republican President.