While visiting the National Gallery of Art this past Saturday, I ran into a pair of errant security guards who have taken to interpreting the Constitution in their spare time. 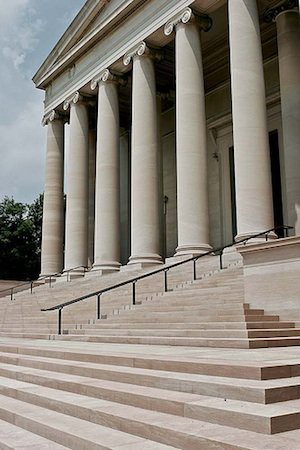 I decided to visit the Gallery after attending the March for Life the day before. There was an exhibit on processes of photography before the digital age that I hoped would confirm me in my refusal to give up on film. After searching my bag, the two guards at the Gallery told me, “You’re good to go in, but first you need to remove that pro-life pin.” He was indicating the small lime green pin with the message “impact73.org” and the silhouette of a small hand inside that of a larger hand that I had attached to the lapel of my coat. The pin, they informed me, was a “religious symbol” and a symbol of a particular political cause and it could not be worn inside a federal building. Why , I asked, can I not wear a religious or political symbol inside a federal building? Bringing to bear the full weight of the supreme law of the land, the guards informed that it was a violation of the First Amendment of the United States’ Constitution: The combination of me, wearing a pro-life pin, in a federal building was a violation of the separation of church and state.

Skeptical that the National Gallery of Art conducts its daily operations under a deviant reading of the U.S. Constitution, I asked where I might find the Gallery’s written policy on this matter. The guards told me that I was not allowed to see the Gallery’s rules. There is no mention in the museum policies found on the Galleries website of any restriction on attire when visiting the Gallery. Nor is there any mention of the prohibition of the expression of free speech by wearing religious or political symbols in title 40 section 6303 of the U.S. code which gives a list of illegal activities at the National Gallery of Art as well as the Smithsonian Institution and the J.F.K. Center for the Performing Arts. (I followed up on my experience with a spokesperson for the Gallery this morning and was told that the guards acted entirely on their own initiative and would be censured. The spokesperson explained that the museum has a policy against carrying posters and signs into the museum, no matter the message, to prevent damage to the art”but none against lapel pins.) It is good to know that the Gallery does not have a policy of censoring free speech, but the actions and arguments of the guards illustrate”besides complete confusion as to the purpose of the First Amendment”an all too common misconception of the role of religion in public life.

“What if I were wearing a cross around my neck?” I asked the security guards, “Would I have to remove that?” “No, of course not,” one of the guards responded, “that’s entirely different.” But it’s actually entirely the same”assuming the guards were correct to call my pro-life pin a religious symbol. If wearing a religious symbol inside a federal building violates the First Amendment ban on the establishment of religion, than no one should be able to wear a cross, or a kippah, or a hijab inside the National Gallery. For that matter, the National Gallery would need to reconsider their display of thirteenth“sixteenth-century Italian art. In fact, they may need to shut down all but the modern and contemporary art exhibits.

But the guards did not seem to care about being consistent; they targeted the pin. This seemed clear just from the fact that the guards recognized the pin I was wearing as a pro-life pin. Had I seen someone wearing this pin on the street I could have mistaken its message as that of an environmental or educational advocacy group or perhaps even an insignia for the American Society for Surgery of the Hand. I would have to have been looking for a pro-life pin to recognize it, which I expect, is exactly what the guards were doing

A pro-life pin is not necessarily a religious symbol because the pro-life movement is not a specifically religious cause. We do not argue that abortion should be outlawed on the basis of a divine mandate; we argue that it should be outlawed because children in utero are human beings with an inherent right to life, exercising the same claim to our protection of that right as other human beings. Had I been wearing a yellow bracelet that said Livestrong or a T-shirt that said Help Haiti I am sure I would not have been stopped. I would be expressing the same sort of belief”that we bear a responsibility to help a specific group of people”but no one would suspect that my views were religiously motivated, they would chalk them up to my sense of humanity. A sense of humanity entirely comprehensible apart from religion.

But, then again, the pro-life pin is not “entirely different” from the cross. My understanding of the inherent worth of every human being is founded in a Christian worldview. While almost anyone can vaguely intuit the dignity of the human person, the Christian recognizes that it is rooted in his being the image of God, a God who descended to become one of our species and suffered and died that we might have life. This view of human beings, informed by faith, cannot and should not be separated from the state and forced out of federal buildings. It would be madness to give up such a treasure. Just as it would be madness for the National Gallery of Art to give up their large collection of art inspired by the Christian story.

Incidentally, I would not recommend the exhibit on photography before the digital age.

Meghan Duke is a junior fellow at First Things .