Call it the Clinton Clutch”the stylized maneuver in the political playbook for incumbent Democrats who have run into a spot of bother. President Obama’s first State of the Union address last night will be interpreted as a replay of Clinton’s 1995 classic. As William McGurn wrote in Wednesday’s Wall Street Journal , the world “will see Barack Obama at the podium. But they will have Bill Clinton on their minds. Specifically they will be thinking of 1995, when a humbled Mr. Clinton addressed a newly Republican Congress after his own health-care proposals went down in flames.” 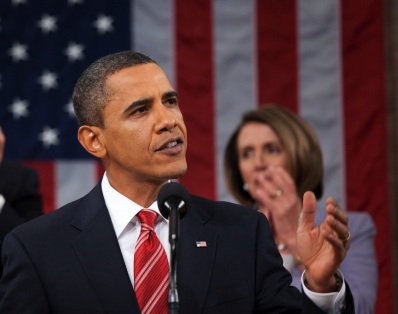 Obama hasn’t been retooled, of course, but he decked himself out in new trim: a spending freeze (that affects only 17 percent of the budget, $50 billion worth of accelerated depreciation for capital investment (extending his own 2009 extension of part of the Bush stimulus), a bit of middle class tax cuts, and the obligatory pork in the form of teaching and transportation subsidies. Didn’t Bill Clinton veer to the right and confound his critics?

Clinton slyly positioned himself to claim credit for the Great Expansion launched in 1983 by the Reagan tax reforms. Employment roared after 1995”the economy added five million jobs in the next two years. Clinton’s theft of welfare reform from the Republicans was like picking up lost money off the sidewalk. It was easy to push people off welfare into a booming labor market. Cutting the capital gains tax in 1997 helped the tech boom at the decade’s end.

In his attempt to emulate Clinton’s success, President Obama resembles nothing so much a the New Guinea aboriginals who built model airfields complete with straw control towers and airplanes after the Second World War and the departure of the American army. The Americans had summoned cargo from the sky through such magical devices, so thought the aboriginals, and by building what looked like airfields, so might they. But Obama can no more conjure up an economic recovery by doing things that look like what Clinton did, than the natives of New Guinea could draw cargo from the sky with straw totems. Marx’s crack about history repeating itself”the first time as tragedy and the second as farce”comes to mind.

It was one thing for Clinton to steal the Republican growth agenda when there was a Republican agenda, and there also was growth. As Dick Morris told Fox News’ Bill O’Reilly just before Obama began speaking, “Bill Clinton could reposition himself because he could control his image. Obama will be an outcome based president. All will depend on what the economy and employment does. As long as the employment rate is where it is and the underemployment rate is where it is, people are not going to have a positive view of Obama, even if he stands on his head. He’ll move to the center and people will say ‘center, schmenter, show me the employment.’”

Obama wanted to be a centrist, and a populist, too, grandstanding against the Supreme Court, Washington lobbyists, and Wall Street. He wanted to take credit for a recovery that is not there, and be the hero who comes to the rescue of an economy in crisis. He offered a band-aid for everything. Banks aren’t lending? The government will lend to small business. America isn’t exporting? Offer an “export initiative” so that “farmers and small businesses can export more of their product.” Americans can’t compete in math and science? Give them more Pell grants and cheaper student loans. The financial system is fragile? Eliminate bank proprietary trading. The middle class is squeezed? Put Joe Biden in charge of a commission on the middle class. Americans are too fat? Put Michelle in charge of “a national initiative on childhood obesity.” Americans haven’t saved for their retirement? Throw in a few more IRAs. Oh, and “we still need health insurance reform”we do,” Obama ended at the end of a long litany.

“The only way we move to long term full employment is to address fundamentals,” the President intoned, but the only fundamental he mentioned was financial reform. “One place to start is serious financial reform. I’m not interested in punishing banks. I’m interested in protecting our economy . . . . guard against the same recklessness that nearly brought down our entire economy.” And the cure he proposed was to stop depositary institutions from trading for their own account, which has nothing to do with real estate speculation. Oh, and research funding for clean energy to make America a world leader in green technology. The budget deficit? Obama called for a bi-partisan commission and, by golly, he would make sure it came up with “specific solutions by a specific date.”

Obama really seems to believe that there is enough economic recovery to take credit for, and that what remains is spin. He really does not seem to grasp the severity of his situation. His “spending freeze” on a tiny fraction of the budget, he said, will take effect “next year, when the economy is better.”

The Japan of the 1990s during its so-called lost decade offers a closer parallel to the American economic predicament of 2010. The United States has lost seven million jobs since the recession began, five million of them on Obama’s watch, and the most recent data point to worse to come. Including so-called “discouraged workers” whom the government does not include in the labor force, the unemployment rate is a wrenching 17 percent, and if “long-term” discouraged workers are counted, the rate rises to 22 percent. To put this in perspective, the unemployment rate stood at 15.9 percent in 1931, 23.6 percent in 1932, 24.9 percent in 1933, and 21.7 percent in 1934, at the trough of the Great Depression. The social safety net, the prevalence of two-earner households, and greater household wealth protect the unemployment against indigence, to be sure. Nonetheless the numbers are daunting, and still deteriorating.

Why hasn’t employment recovered, and why is not likely to? America is a creative-destruction economy. Old jobs lost in recessions for the most part are lost forever; new jobs replace them. Small business startups accounted for two-thirds of all net new job creation during the past thirty-five years. During the 1990s it was new industries (cell phones, cable, overnight delivery, as well as retail, financial and clerical). During the 2000s the housing boom dominated job creation, directly or indirectly. Small business remains prostrated”half of all small business owners report cash flow problems”and there are few opportunities to expand.

The first Obama stimulus failed to revive the economy, for reasons that Reuven Brenner and I discussed in the December 2009 issue of First Things :

A huge jump in the retirement rate coincides with the collapse of an asset-price bubble that has left a dangerous level of debt on domestic balance sheets. The consumer-driven model cannot be restored, because the problem it faces has nothing to do with the random, temporary shifts in psychology (“animal spirits”) that Keynes noted. The problem we face instead is that the accumulation of mistakes and loss of wealth happened just as the baby boomers were about to retire.

It certainly is true, as conservative commentators insist, that Obama steered too hard and too fast to the left for the majority of American voters. But underlying all the discontent is the simple and obvious fact that a very large number of Americans are watching their lives go to ruin. They are losing their homes, their savings, their jobs, and their prospects for dignified retirement. The trouble is not the short-term pain, but an adverse and irreparable change in the lives tens of millions.

What will Obama do when it dawns on him that the economy will not be better next year”perhaps a couple percentage points larger in terms of GDP, but worse in terms of employment and household balance sheets? The economy requires major surgery. As Brenner and I argued in the cited article, Americans can increase savings while maintaining full employment only by exporting and investing, and that requires a fundamental shift in the tax burden away from investment income to consumption”a tax reform more sweeping than Reagan’s.

Obama’s Clintonesque pose will last as long as his perception that future economic growth will give him something for which to take credit. Well before the mid-term elections Obama will re-invent himself yet again, this time as a raging populist.