If there is truth to the Christian artist’s claim that fiction is incarnational”that the spiritual significances of things must be not just enshrouded by but wedded to the fleshly movements of human characters”then might it not also be true that the portrayal of religious-minded characters is very often problematic? That the naked portrayal of religious belief carries with it the power and even the tendency to kill the story?

Consider Dan Lawlis’s Orange Peel , a new online comic book starring a Christian superhero named Paul Roman. You can tell Orange Peel is a superhero because he’s buff and wears a skin-tight orange costume adorned with the number three (for the Trinity). Other than that, he seems very much like a regular Christian guy who’s had a couple of mystical experiences, neither of which have a clear connection to his decision to don a costume.

I have a number of problems with Orange Peel , starting with some of its hero’s claims about the Christian life. There’s this exchange, to pick one rather startling example:

“And if I believe in Jesus, my life will get better?”

“Absolutely. You will be at peace no matter what.”

But that’s just the content. My biggest problem is with the form: It’s less a story than a Platonic dialogue, in which one character has all the answers, and the others ask questions designed to draw those answers out. It’s not a structure that cries out for illustration via sequential art. Because over the course of forty pages, not a whole lot actually happens. Orange Peel tries to witness to some guys hanging out by the side of the road. They argue about the existence of God. The guys are so outraged at Orange Peel ’s beliefs that they try to beat him up”all except one, who defends him and then escapes with him into the desert.

In the desert, Orange Peel and the man talk some more about the existence of God, the vagaries of religion, and suffering. Meanwhile, the bad guys reason that the best way to take over a planet is to corrupt its inhabitants’ morals and destroy their family structures: “You can easily brainwash the public through the media . . . drugs, alcohol, promiscuity can be glorified in music, movies, and TV . . . . Religion can be lampooned as medieval morality.” Yes, they do get around to blowing up a boat, but it’s still just so much talking from people striking dramatic poses.

And here’s the shame of it: There is the germ of a story in Orange Peel , and it’s a doozy. Once, our hero was “seduced by the self-righteous liberal movements,” specifically, the pro-choice movement. “I was convinced what I was doing was fighting against injustice and intolerance,” he explains. But even so, he still felt empty, and found himself wandering into a desert. There, he had a vision: The very stars descended, revealing themselves to be the souls of fetuses lost to abortion. 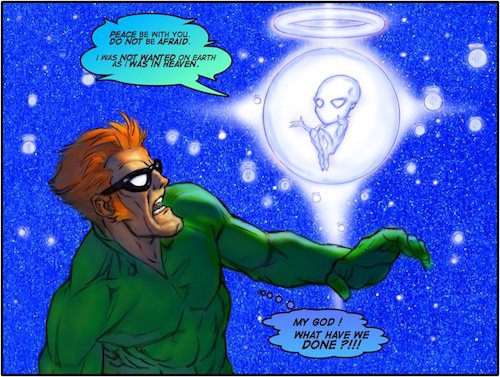 It’s a moment ripe with narrative possibility. Orange Peel has the chance to me a modern day prophet, telling everyone about the amazing things he has seen, and dealing with the responses. (How would you respond to such a man? To any spiritual visionary who told you to change your behavior based on his vision?) Sadly, instead of proclaiming his vision, he asks people about the origins of their thoughts. Orange Peel is a comic book full of argument, but argument that does nothing to advance the story, to reveal the spiritual realities through the actions of the characters. That’s not storytelling; that’s propaganda.

I’d like to relate my favorite pro-life moment in comics, which appears in volume four of Bill Willingham’s very fine (but not kid-friendly) series, Fables . A bunch of fable characters”Snow White, the Big Bad Wolf, Old King Cole, etc.”have been driven from their homeland by the murderous Adversary, and are hiding out in New York City. Being fables, they’re something close to immortal, and they call the rest of us “mundys,” short for “mundanes.”

Snow White is the heroine, and at one point, winds up pregnant against her wishes (she was under a spell when she conceived). The pregnancy, she says, is “going to ruin my life, my standing in the community, and what’s left of my reputation.” Touched, her doctor informs her of her options. And then “ well, have a look: 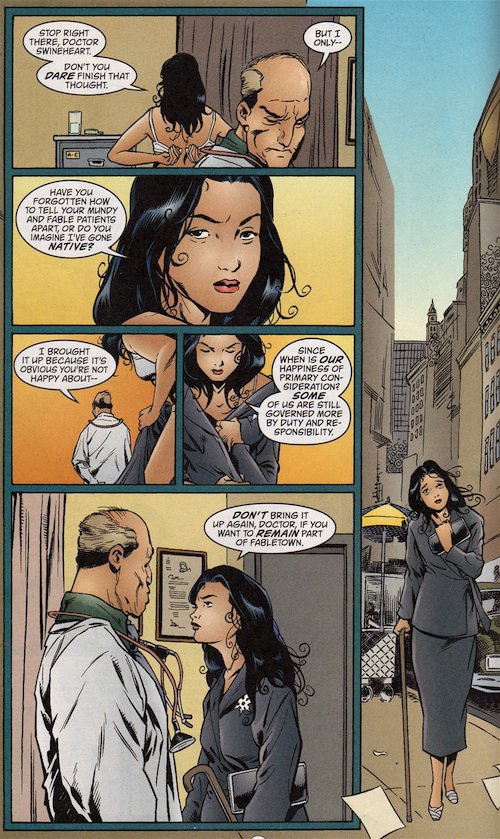 It’s my favorite pro-life moment for a couple of reasons. First, it’s appropriately complicated. The pro-choicer might say, “Of course she says that”she’s a fable, she can afford to embrace the fairy-tale happy ending.” Fair enough, except that she’s already been divorced from Prince Charming, and fairy tale or not, she’s a single woman pregnant with, as it turns out, seven babies she didn’t ask for. Happy endings are by no means a given. The pro-lifer might say, “That’s awesome, the way she treats abortion as the ‘mundane’ option”it’s beneath her dignity.” Fair enough, except “mundane” here means “human,” and it’s worth remembering that in many cases, the decision to abort”to seek escape from a disastrous situation that promises lifelong consequences”is deeply human. As in, right in line with the way humans tend to behave.

Yes, she’s the heroine, but that doesn’t make heroic action easy. Look at her face as she walks home.

Second, and perhaps more importantly, it’s part and parcel of both the story and the character. Here, unwanted, unplanned pregnancy is not an “issue,””something to be debated and judged. Rather, it’s a thing that happens to someone, someone who responds in a way consistent with who she is: a community leader. No talk of the life growing within her, of tiny hands and feet and heartbeats. Just a blunt dedication to duty, and a willingness to sacrifice personal happiness for the sake of another. That’s our Snow.

I have no idea how the author of Fables feels about abortion, and that’s a good thing. Snow White is not a mouthpiece for Bill Willingham”her speech is her own. I do know that this moment in the story rang true. And that’s what matters.

Matthew Lickona is a staff writer for the San Diego Reader , a weekly newspaper, and author of Swimming with Scapulars. He recently produced his own abortion-related comic-book, Alphonse: A Monster for Our Time , which he discussed in The Awl and which was reviewed in Our Sunday Visitor .