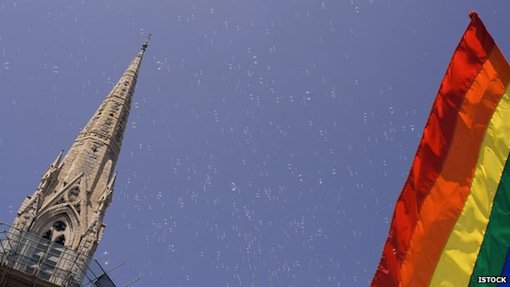 When considering the pastoral language the Church should use in speaking about homosexuality, the guiding principle must be what then Joseph Cardinal Ratzinger wrote about the subject in 1986, writing as the head of the Congregation for the Doctrine of the Faith: “Only what is true can ultimately be pastoral.”

It is here where I disagree with Wesley Hill’s argument in his essay “ On ‘Bilingual’ Pastoral Theology ,” written in response to my essay “ Homosexual Orientation or Disorientation? ” There I made the case that our divinely created complementary male and female natures are the only acceptable”and ontologically true”descriptions of man’s sexuality within the Church’s anthropology. In Hill’s response, he makes what I find to be a strange argument: In order to be truly pastoral when speaking about same-sex attraction, the Church must speak the language of our “fallen experience,” and presumably accept and support whatever sexual self-identity we may choose to use about ourselves:

What I think Mattson obscures or confuses . . . is that ethics and pastoral theology needs to speak two languages, not just one. Of course we need to be able to speak the language of creation. Our embodiment as male and female is a given , and this sexually differentiated gift will be healed and redeemed, not discarded, in the eschaton . . .

But on the other hand, we must also speak the language of fallen experience . When Mattson writes that his “true orientation is towards women, my true sexual complement,” he is eliding the distinction between our created sexual difference and gay and lesbian people’s experience (“orientation”) of being attracted to the same sex.

In contrast to Hill, I believe the only purpose the Church has in speaking about “fallen experience” is to speak truths that disabuse us of falsehoods. Our fallen experience is valuable insofar as it becomes a narrative that points us to the truth of the Church’s anthropology. The danger lies in getting mired in faulty narratives created by fallen man, which lead men and women to be at cross purposes with their divinely created nature.

This, I think, applies to those same-sex attracted authors who desire the Church to support them in their self-identity as gay, lesbian, or queer, or in their belief that “queerness” is some sort of beautiful exceptional otherness , or suggesting that homosexuality is in any way good . In the same document from the CDF linked to above, Ratzinger wrote in opposition to those who gave “an overly benign interpretation . . . to the homosexual condition itself” as well as those who have gone “so far as to call it neutral, or even good.”

The collection of Catholics (and other Christians like Wesley Hill) who identify as “gay but chaste” often criticize the language of the Catholic Church concerning homosexuality, because in its teaching it uses challenging language: that our desire for members of the same sex is “objectively disordered,” and that sexual acts between members of the same sex are “intrinsically disordered.” Eve Tushnet, for example, shows great disdain for the Church’s language when she writes , “the ‘intrinsically disordered’ language sucks and is a mark of privilege, the kind of thing you only say if you don’t feel it yourself or don’t care about the other people who feel it” and believes that part of her mission, and of others who think like her, is to work to “come up with a vastly broader and better set of vocabularies than the ridiculously, painfully limited set the Church is working with right now.”

Tushnet says to other same-sex attracted men and women to not “focus on the failures of the Church’s language ,” because by doing so, “not only do you lose the opportunity . . . to improve that language, but you also lose out on everything else the Church offers.” As someone who also lives with same-sex attraction, I believe that the only way to experience everything the Church offers is by humbly submitting to the Church’s teachings, in toto, about homosexuality”including her language about my disordered desires”precisely because it is the one area which impacts my life most deeply. And because it’s true.

Like the teaching of Christ about eating his flesh and drinking his blood, it is a hard teaching , but I choose to accept it nonetheless as part of the good news of the gospel. Far from seeing the language of the Church as “ridiculously, painfully limited,” or that there are any “failures of the Church’s language” about homosexuality, I see the Church language as liberating and beautiful. The language honors and reveals the complete dignity of my created nature as a man, made in the image and likeness of God. By taking the sacredness of sexuality seriously enough to teach the unflinching truth about its divine nature, and man’s obligations regarding it, the Church reveals the means by which sexuality will bring man the most fulfillment, as well as the way in which its misuse leads man towards chaos.

The difficult language is necessary: Sexual acts between members of the same sex are intrinsically disordered, for the reason that there is never (and can never be) any positive reordering of the sexual faculty to what is true, good, and beautiful between two members of the same sex. As a man tempted to engage in such activities, the Church loves me enough to teach me in the Catechism that “under no circumstances can they be approved.”

This is entirely different for a man whose disordered desires are directed toward a woman. For example, the man who is sexually active with his girlfriend is acting in a disordered way”but not intrinsically so. With the grace of God, his desire for the opposite sex, which is designed for the good of marriage, can become ordered to that end. Not so my desires for another man. The flutter of excitement I might feel at the sight of an attractive man is for me the canary in the coal mine that shows me that I am being driven by disordered desires within me, and it is the most effective tool God uses to make it clear to me that I am a “stranger in a strange land.”

The men I see on a daily basis who I find attractive are used by God to show me that my true happiness will never be had through any of the things of the world, and that I must abandon all things to his good pleasure if I desire to find peace and fulfillment. Here God desires for me to be “transformed by the renewing of my mind,” as St. Paul says in Romans. For me, the clarity of Church teaching on homosexuality”in its entirety”is a gift that points me towards heaven, and it is this searing clarity the Holy Spirit used to bring me back to the Church, even though I came back kicking and screaming the entire way.

Therefore, I take great exception with the view of Tushnet and Hill that the pastoral language of the Church is in need of modification concerning homosexuality. The stark (and admittedly difficult) reality presented to me, and to every other man or woman living with same-sex attraction, is that our desires for the same sex are objectively disordered, and that though we may never experience it in our lives, we are indeed created by God with an orientation toward the opposite sex. This is what is true, beautiful and good, and therefore, that which is ultimately pastoral.

Daniel Mattson lives in the midwest, where he has a career in the arts. He takes great interest in the Church’s teaching on homosexuality and from time to time, he is invited to give his personal testimony to groups around the country. He blogs under a pseudonym at LettersToChristopher.wordpress.com .

Joshua Gonnerman, “ Why I Call Myself a Gay Christian ”

Daniel Mattson, “ Why I Don’t Call Myself a Gay Christian ”

Wesley Hill, “ Once More: On the Label ‘Gay Christian’ ”

Melinda Selmys, “ How to Speak About Homosexuality ”