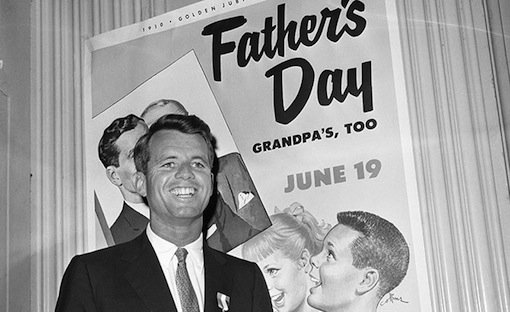 Father’s Day is the perfect American invention: equal parts moralism and money-making. Early in the twentieth century the dominant forms of Protestantism urged temperance and campaigned, successfully, for Prohibition. This famous episode in American history was part of a larger moral project, one very concerned with reinforcing what we now call family values.

Given this history I’m inclined toward a bit of skepticism about Father’s Day. In a sour moment you might find me saying that Father’s Day is to neckties what St. Patrick’s Day is to beer. But there’s a sweet side as well. Like Mother’s Day, Father’s Day provides an opportunity to fulfill one of the most joyful of the Ten Commandments: honor your mother and father.

By joyful I mean more than Hallmark sentimentality, which Father’s Day of course can descend into. The Decalogue is dominated by don’ts. Don’t worship other gods. Don’t murder. Don’t lie. Don’t commit adultery or covet. But in the middle we find two happy do’s: keep the Sabbath holy and honor your mother and father. These positive commandments play a very important role in the biblical vision of morality. They encourage us to obey the prohibitions because our hearts are otherwise occupied rather than relying on self-discipline.

Consider the opening commandments. Depending on how one parses the verses, at the outset there are two or three commandments that amount to a prohibition against idolatry and desecration. The final grouping or second table also involves prohibitions, each concerning our relation to our neighbors. Put simply, the first table of the Ten Commandments prohibits violations of divine dignity and the second table, violations of human dignity, with the last commandment against covetousness best understood as prohibiting us from violating the dignity of our own humanity.

There are two ways to keep these”or any”prohibitions. The most obvious approach guards against transgression by maintaining a careful discipline. In order to prevent idol worship we smash idols and prohibit their fabrication. To prevent adultery we carefully regulate and monitor the social interactions of men and women. This approach is certainly fitting. For these and other precautionary measures are what we pray for when we petition God in the Lord’s Prayer: lead me not into temptation. It’s what Jesus meant when he counseled us to pluck out our eye if it causes us to sin.

The second approach differs from the first. It seeks to capture our souls, disciplining us from within, as it were. For example, a wise teacher knows that finding an engaging focus for a disruptive student is far more effective than redoubled discipline. We’re most obedient to prohibitions when we’re too preoccupied by what we love to give much time or thought to transgressions.

The commandment to keep the Sabbath takes this approach. When we come before the true God in worship, idols look like unappealing imitations of the divine. If we have regular commerce with the living God in prayer, we won’t be satisfied with cheap substitutes. Put somewhat differently, the positive commandment to keep the Sabbath holy takes up some of the space we often fill with transgressions. If we hallow the Sabbath, then we won’t hallow the battlefield, the legislative chamber, or the marketplace.

The commandment to honor our parents works in similar way. The second table of the Ten Commandments concerns the right ordering of social relations, prohibiting actions that undermine human institutions, sow distrust, and trigger conflict. The positive commandment to honor our mothers and fathers encourages us to affirm and reinforce the deepest and most fundamental social relation of all: that of parent and child. Idle hands do the devil’s work, and so do idle hearts. Honor your mother and father, and you’re less likely to serve Mammon, chase after celebrity, worship the generalissimo, or bow before the Führer.

I certainly felt a duty to call my father on Father’s Day, a happy one, of course, but one also tinged with the compulsion of a commandment that sons and daughters feel whether or not they’ve ever heard of the Ten Commandments. Our commercial culture exploits this feeling of duty, fanning it and promising that this or that product will provide just the right display of filial gratitude.

The commercialization almost certainly distorts our proper impulse to honor our mothers and fathers, but in the main it’s a good thing. Those tee-totaling matronly activists who lobbied for Father’s Day weren’t altogether wrong. Family values do need public reinforcement, which the conspiring forces of commerce certainly have provided.