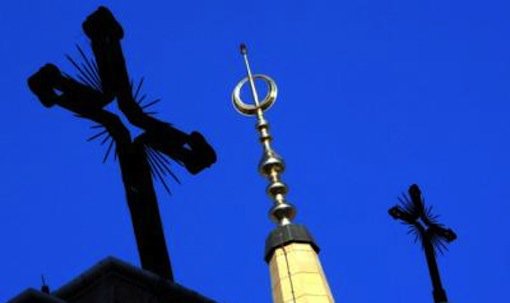 Do Christians and Muslims worship the same God? Since the devastating attacks of 9/11”when the world saw afresh that religion has geo-political consequences, and that Islam is the most volatile religion on the world’s stage”more and more Christians have been asking this question.

Yale theologian Miroslav Volf answers the question in a recent book ( Allah: A Christian Response ) with a nuanced but insistent Yes: Christians and Muslims do indeed worship the same God. In a review of Volf’s book, Baylor historian Thomas Kidd faults Volf for sidestepping the question of salvation”and therefore the question of true worship”and for not being critical enough in his evaluation of the identity of the God or gods of these two religions.

Kidd is quite right; indeed, there are deeper problems with Volf’s thesis. His argument for the identity of the Muslim and Christian Gods collapses under its own weight. Volf’s own logic underscores what the Qur’an itself suggests”that the God of the Qur’an is radically different from the God Christians worship.

Volf argues that if Christians are to determine whether “the God whose final self-expression is found in the life and teachings of Jesus Christ [is] the same God as the God of the Qur’an,” they should compare “specific but overlapping convictions about God found in the holy books of Christians and Muslims.” If they find that descriptions of the object of worship are “sufficiently similar,” Christians can assume that “the object of worship is the same.” Most telling, he avers, are commands in the holy books: “If what God is said to command in the Bible were similar to what God is said to command in the Qur’an, then this would suggest that the character of God is similar and that Muslims and Christians have a common God.” Volf focuses on the two great commandments of the Bible, love for God “with our whole being” and love for neighbor “as ourselves,” and argues that Islam, just like Christianity, makes these commands central to worship of God.

But does Islam”and here Volf zeroes in on “the God of the Qur’an””enjoin these two commands? His evidence for the claim that Islam teaches the first commandment”that we are to love God with our whole being”is remarkably scanty, and odd at that. He proffers only one phrase from one verse in the Qur’an”“God, One and Only” (39:45)”for support, explaining that “once you embrace the belief in the one true God and know what you are talking about when you say ‘God,’ you’ve bought into the commitment to love God with your whole being.”

Volf’s resorting to this one phrase is understandable. Love for God is never commanded by the Qur’an and rarely even mentioned. As Islamicist Gordon Nickel has shown, only three verses appear to use unambiguously what translators render as “love” in the human response to God (2.165; 3.31; 5.54), and two more may do so as well, depending on how the Arabic is translated (2.177; 76.8). Yet none of these verses command love”they merely describe a relation to Allah”and they are at most five out of six thousand verses.

Even Muslim scholars recognize that none of these five verses constitutes a command to love God. In his 1960 study, The God of Justice: A Study in the Ethical Doctrine of the Qur’an , Muslim scholar Daud Rahbar insisted that “the Qur’an never enjoins love for God.”

Volf points to Sufis (Muslim mystics) for support, for they have often praised love for God. But Volf’s use of Sufis has its own problems. First, this support is from outside the Qur’an and Volf’s principal argument rests on a comparison of the gods of the two holy books, the God of the Bible and the God of the Qur’an. Second, Sufis are not representative of mainstream Islam, which over the centuries has often denounced Sufism as a departure from Islamic orthodoxy. Third, the Sufi conception of love is profoundly different from that of Christian orthodoxy: according to Sufi theologian Abu Ham?d al-Ghaz?li (d. 1111 AD), love between the Muslim and God is no longer a duality but a unity in which the individuality of the human is annihilated.

What of Volf’s second claim about the Islamic God’s principal commands”that Allah commands love for neighbor as oneself? For evidence to support this claim, Volf goes not to the Qur’an but to the Hadith, written records of oral tradition about the sayings and deeds of Muhammad. Volf concedes that Muslim sacred texts do not affirm love for enemies, but rests his claim for Muslim neighbor-love on the oral tradition of Muhammad’s saying, “None of you has faith until you love for your neighbor what you love for yourself.”

Once again there are problems. The first is that the Qur’an contains repeated admonitions to Muslim believers not to make friends with non-Muslims. For example, 3.118 reads, “O believers, do not take as close friends other than your own people.” Similar warnings are in 58.22 and 60.1. In the Encyclopedia of the Qur’an , Denis Gril observes that “love or friendship between human beings is not fully recognized by the Qur’an unless confirmed by faith.” Instead there is conditional love: “One can truly love only believers, since love for unbelievers separates one from God and attracts one toward this world . . . . Adopting unbelievers as friends or allies . . . is equivalent to lining up on the side of the enemies of God.”

This is strikingly different from the command of Jesus to his disciples to love their enemies (Mt. 5:43-48). Another difficulty is that there simply is no command to love one’s neighbor in the Qur’an. One can talk about love for neighbor in the Islamic tradition , but not as something commanded by the God of the Qur’an.

Hence we cannot infer that what Volf calls “the character” of the God of the Qur’an is the same as that of the God of the Bible. In fact, we would have to conclude, using Volf’s own reasoning, that these are two different gods, for the difference in the two love commands suggests”by his own logic”two different characters. (Not that two different Gods actually exist, of course, but that Muslim and Christian understandings of the one God are radically different.)

All this is not to say that no Muslims can be saved by the person and work of Jesus Christ. Nor is it to suggest that Muslims never make contact with the true God. For Scripture attests that God graciously reaches out to those who have faulty notions of him. But we have to conclude nonetheless that the God of the Qur’an is a very different God from the God of the Bible.

Gerald McDermott, the Jordan-Trexler Professor of Religion at Roanoke College and Distinguished Senior Fellow at the Baylor Institute for Studies of Religion, is coauthor (with Harold Netland) of A Trinitarian Theology of Religions: An Evangelical Approach (Oxford University Press, forthcoming).