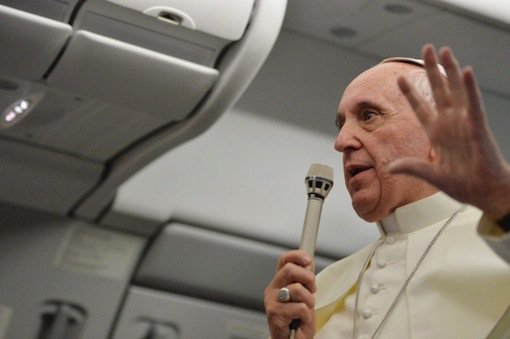 While traveling to Rio de Janeiro to preside over his first World Youth Day, Pope Francis declined to do a formal interview with the press pool: “I don’t give interviews. I don’t know why . . . . It’s tiresome. But I enjoy your company.”

On the return to Rome, the Holy Father”perhaps feeling energized by a spectacularly successful event that saw an estimated three million souls gather for Mass at Copacabana Beach”surprised the media with an eighty-minute Q-and-A that resulted in screaming headlines and more than a few clenched jaws.

What did Francis say? Well, at this writing, the official Vatican transcript is not available, but according to reports, the Pope endorsed the Catechism of the Catholic Church:

A gay person who is seeking God, who is of good will”well, who am I to judge him? The Catechism of the Catholic Church explains this very well. It says one must not marginalize these persons, they must be integrated into society. The problem isn’t this [homosexual] orientation”we must be like brothers and sisters. The problem is something else, the problem is lobbying either for this orientation or a political lobby or a Masonic lobby.

While it is true that, as newsman and Vaticanista John Thavis quickly noted , Francis’ remarks were not meant to be “specifically about gay priests,” secular headlines implied otherwise . His words, however, came in answer to a question about the so-called “gay lobby” within the Vatican and specifically concerning one of Francis’ own appointees, whose past had been raised by some as a cause for concern. To this, Francis replied,

I did what canon law requires, which is to conduct a preliminary investigation. We didn’t find anything to confirm the things he was accused of . . . . I’d like to add that many times we seem to seek out the sins of somebody’s youth and publish them. We’re not talking about crimes, which are something else. The abuse of minors, for instance, is a crime. But one can sin and then convert, and the Lord both forgives and forgets. We don’t have the right to refuse to forget . . . . It is dangerous. The theology of sin is important. St. Peter committed one of the greatest sins, denying Christ, and yet they made him pope. Think about that.

As Mollie Hemingway pointed out at Get Religion , any pope discussing gay anything will make headlines. In this case, nothing Francis actually said about homosexuality was new. In fact, in these two quotes Francis is doing nothing more than pronouncing long-standing Catholic teaching on homosexuality, sin, and the mercy of God.

Let that sink in for a moment: A pope is teaching the Christian faith, and the press is accurately quoting him, in blazing headlines that everyone will read.

It is very true that the secular press will do as much as they can to frame a pope’s words in ways that suit a preferred narrative. Recall that Pope Benedict’s remarks on the use of condoms in very specific circumstances initially generated headlines announcing the pope had “approved” the use of condoms in a more general way.

Spinning and framing is what takes up most of the time of the mainstream press. That being so, some Catholics on social media are voicing concerns that Pope Francis is being “used” by the press in order to serve their own, gay-sympathetic agenda. Wrote one terribly irate man on Facebook: “Francis hasn’t broken through the media hostility to Catholicism”rather, they think (wrongly, I presume) that he’s an ally in their fight against Catholicism.”

Perhaps they do believe that; perhaps some of them really are “using” Francis. But how do they know he is not “using” them right back?

In Sun Tzu’s The Art of War , we read, “Speed is the essence of war. Take advantage of the enemy’s unpreparedness; travel by unexpected routes and strike him where he has taken no precautions.”

Francis is doing precisely that. Unlike Pope Benedict XVI, who was already despised by the press as Cardinal Ratzinger, Francis is the surprising, not-quite-known entity with whom the press is still unfamiliar and thus only marginally prepared to counter. He keeps people on their toes. He declines interviews, then unexpectedly pops in for one, and then proclaims the reality of Church teachings through a subject the press cannot resist covering.

The fretting and hand-wringing that greets the news on any given day misses the fact that God takes the long view: What seems urgent to us is the merest puff of a moment within the movement of his will, toward his eventual ends. If the press thinks they are moving a socio-political ball forward by quoting a pope who is teaching eternal truths, so what? Why should that trouble anyone? Just as a priest need not be in a state of grace to celebrate a licit mass, the motivations of a reporter who repeats our teachings do not matter. In this way, victory is assured. The headlines are incidental to the action of the Holy Spirit, who exploits them to work God’s own will.

God’s timeline is not ours, nor his ways our ways. At Gethsemane, imperfect Peter was told to sheath his sword. He learned that a long battle requires stealth, patience, and a willingness to take the long view.