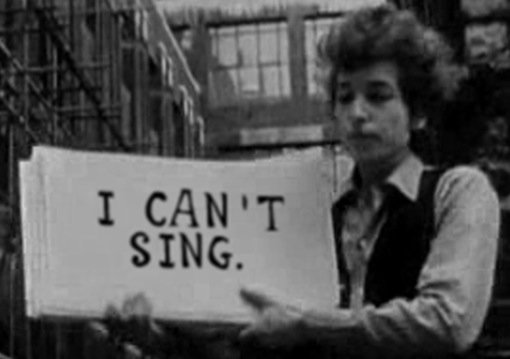 If you have been following Bob Dylan’s Never Ending Tour, online or in person, you’ll notice that a lot of people, even some who are self-professed Dylanologists, have been complaining about the roughness of his voice. To these critics I say: Complaining about Dylan’s voice is like complaining that your scotch tastes too peaty. If you want something sweet, get a colorless spirit that easily surrenders to the overwhelming invasion of fruit juice. Otherwise, let his voice burn your ears just as it sounds like it is blistering his throat when he sings.

Since it is little more than decayed vegetation, peat is actually not a bad metaphor for Dylan’s voice, which has never sounded fresh and youthful. It was old when he was young, and now that he is old, it sounds ancient. Just as barley dried on a mossy fire adds flavor to whisky, creaky and rusty vocal folds (or so I imagine what a laryngoscopy would find) add timbre to Dylan’s singing. Would anyone really want a doctor to smooth the fibrous tissue or remove the bumpy nodules on his vocal cords in order to make his voice sound “better”?

What I have said about Dylan can be said about beauty generally, but that does not make it less true. Both scotch and Dylan are reminders that beauty emerges out of and redeems, rather than opposes and destroys, the ugly. A little bitterness makes the scotch taste sweeter, and wavering off key makes the difference between a good singer and a great performer.

There are many imitators of Dylan (and many types of bourbon that aim at scotch’s greatness), but you cannot fake peaty stench or smoke-aged vocal cords. Think about how a beauty mark can make someone who is merely attractive appear perfect, and then think too of the curious phenomenon of Monroe piercing, which is the insertion of a metal ball above the left side of the upper lip, in homage of Marilyn. You can’t buy the kind of ugly from which beauty is made.

Dylan has always been an unconventional singer, but he knows, to paraphrase the Apostle Paul (2 Cor. 12:9“10), that strength comes from weakness. He knows, that is, how to sing against the weaknesses in his voice in order to reveal its strength just where it is most limited.

That is surely not easy to do, nor is it easy to describe. Indeed, the sonic character of any voice, perhaps because voices are both intimate and invisible, is hard to pin down with any accuracy or detail. If so, consider that it would take a writer as skillful as John Updike, who indeed was sensitive throughout his work to the literary challenges of sound, to describe a voice like Dylan’s. In fact, early in his career, before Dylan became Dylan, Updike took on the challenge, describing him as having a “voice to scour a skillet with.” That seems about right for detail and accuracy but misses what lets Dylan get so deep inside your head.

Dylan himself was skilled at describing the voices of singers. In his memoir Chronicles, he describes how Woody Guthrie “would throw in the sound of the last letter of a word whenever he felt like it and it would come like a punch” and how Johnny Cash’s “voice was so big it made the world grow small.” Dylan writes like a singer, just as he sings like a writer.

To paraphrase the Bible again, this time a comment made about Jesus (Matt. 7:29), Dylan sings as one having authority, not like the pop stars who just want to please. When critics complain about Dylan’s voice, they sound like they are whining, which is exactly what they claim Dylan sounds like. Perhaps what the critics miss most is how Dylan’s voice gives sound to suffering while still being uplifting and, yes, entertaining.

In Chronicles, Dylan documents the period, right before the making of Oh Mercy , where he felt like he was losing his vocal touch. The whisky, he says, had “gone out of the bottle,” and his songs felt like “a package of heavy rotting meat.” He had lost not his voice but his purpose, since he “wasn’t keeping my word with myself.” He needed to recall his music “up from the grave.”

He recovered his voice when, taking a walk one night, he heard someone singing in a nondescript bar. He doesn’t name the singer, but he does try to name the experience he had. “I knew where the power was coming from and it wasn’t his voice, though the voice brought me sharply back to myself.” To paraphrase the Bible one last time (Matt. 11:15), Dylan sings as one who has ears to hear.

Stephen H. Webb is a columnist for First Things . He is the author of Jesus Christ, Eternal God and, forthcoming, Mormon Christianity . His book on Bob Dylan is Dylan Redeemed.