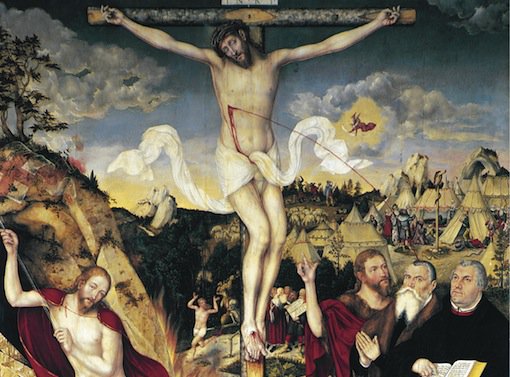 I really did not intend to ignite a theological firestorm when I wrote my On the Square column, “ No Squishy Love .” I simply pointed out that the committee preparing a new hymnal for the Presbyterian Church (USA) had voted to omit the much loved hymn “In Christ Alone,” because of its offending line, “Till on that cross as Jesus died / The wrath of God was satisfied.” I tried to place this decision in a wider historical context. But then “No Squishy Love” went viral, generating thousands of comments and spin-off articles not only on the Internet and in religious publications but also in USA Today , The Washington Post , and even The Economist ! What’s going on here?

As a general rule, I do not respond to book reviews or blog chatter, but all this holy hullabaloo has prompted me to add a few comments to my original statement.

1. Lex cantandi, lex credendi. The “In Christ Alone” controversy, as some have called it, is not a mere dust-up about theological abstractions. It touches the heart of Christian devotion, prayer, and praise. One cannot understand evangelical history without due attention to evangelical hymnody. The rule of praying and singing is inseparable from the rule of believing. Whether it is the metered psalms sung by the Huguenots at their mass meetings, or the texts of Isaac Watts refracted through the prism of suffering and moaned by slaves in hidden brush arbors, singing to God has been a primary way of shaping the soul and giving identity. Elisabeth Elliot, who went as a missionary with her husband Jim to the jungles of Ecuador where he was martyred for the faith, describes how singing the hymns she had learned as a little girl sustained her through the darkest days. There are many evangelical hymns, of course, that suffer in both content and musicality. But “In Christ Alone” is not one of them. Although published fewer than fifteen years ago, “In Christ Alone” has become one of our most cherished and most often sung contemporary hymns”not just in North America and not just among evangelicals. It has been translated into many languages including Russian, German, Spanish, Chinese, Korean, and Indonesian, among others. “In Christ Alone” is well on its way to becoming the “Amazing Grace” of this generation. Although the authors, Keith Getty and Stuart Townend, are Protestants, “In Christ Alone” is being sung by Catholics as well. It can be found (unexpurgated, by the way) in the third edition of Journeysongs published by Oregon Catholic Press, the nation’s leading publisher of Catholic worship resources. One more thing: unlike many of the praise ditties that clutter Christian worship today, “In Christ Alone” has real theological substance. Perhaps that is why it was featured on March 22 at the enthronement of the new Archbishop of Canterbury Justin Welby”at the personal request of His Grace. So one of the lessons of this furor may be this: you can miss a doctrinal point here or there, or change the bureaucracy of the church if you must, but for God’s sake don’t mess with our music!

2. Anselm, the fall guy ? That’s all true, but at its heart the issue is indeed theological. Put succinctly, it is about how the holy love of God and his righteous wrath against sin coinhere in the atoning death of Christ on the cross. One response has been to say that the committee’s problem with the hymn lyric was not so much the noun wrath as the predicate adjective satisfied, although other comments suggest that the real problem was indeed the concept of divine wrath or anger. In any event, the key culprit in this alleged misconstrual is said to be the medieval theologian Anselm. Gustaf Aulén’s famous book, Christus Victor , attributes to Anselm the juridical or “Latin” atonement theory in contrast to the “classic” or ransom theory taught by the church fathers and (so Aulén claimed) recovered by Luther. But in significant ways, Aulén got both Anselm and Luther wrong. Whatever the weaknesses in Anselm’s theology of atonement set forth in his treatise Cur Deus Homo (and Calvin found several), what he was doing there is continuous with central redemptive motifs already found in the church fathers and the Scriptures. According to Eugene R. Fairweather, what Anselm does is “to grasp both [the initiative of divine love and the Godward action of human nature] with a clear-sightedness unknown at least to his immediate predecessors, and express them in terms of the ‘satisfaction’ made to the divine honor, or reparation paid to the divine glory”a concept which not only appears verbally in the Latin fathers, but also expresses an essential idea of their theology.” Colin Gunton goes even further finding Anselm’s treatise congruous with On the Incarnation by Athanasius, and the theology of Irenaeus before that. The fact is, all three of the major atonement theories outlined by Aulén reflect some important aspects of the Bible’s teaching on atonement. Ransom ( lutron ) is a New Testament word (Mark 10:45; 1 Pet. 1:18; Titus 2:14) and points to the cross as an arena of combat where Jesus Christ triumphed over Satan and his pomp. Penal substitution teaches that on the cross Christ was handed over to death in our place. He endured there what was due to us, God’s righteous judgment and holy wrath. Even Abelard’s description of the atonement points to the outrageous love of God fully displayed in the cross, a love which is not only exemplary but efficacious. This is a sturdier theology, it must be said, than the so-called moral influence theory which devolved from it into the bourgeois moralism against which Niebuhr was reacting in his famous “a God without wrath” comment. But Anselm’s formulation perdures, despite its flaws and the many attacks launched against it. This is because it accounts in an intelligible manner for the underlying unity of the person and work of Christ, and the divine-human act of omnipotent love which is the atonement.

3. Which God? Whose wrath? The most important line in my original article was this one: “But God’s ways are not our ways, and God’s wrath is not like our wrath.” Caricatures of God’s wrath abound both in theological circles and popular piety: the Temper-tantrum God, the Mean and Merciless Judge, the Abusive Stepdad Upstairs, and so on. Where do these ideas come from? The strongest challenge to the Christian God in the modern world is not found in the juvenile atheism of Dawkins, Hitchens, and Harris, but rather in the work of Ludwig Feuerbach who argued that God is the projection of human self-consciousness, a view given psychological precision by Freud. But such projections can be negative as well as positive. This is what we have when we turn God into the spitting image of our own fantasies, failures, and fears. Such dark projections, I believe, give rise not only to the denial of God but also to the rejection of the biblical doctrine of the atonement. When this happens, our theological vision is distorted. We forget that in the Bible’s story of redemption, God’s wrath and his love are always coinherent. We forget that God does not love us because Jesus died for us, but Jesus died for us because God loves us. This is nowhere better said than in the New Testament itself: “God is love. In this was manifested the love of God toward us, because that God sent his only begotten Son into the world, that we might live through him. Herein is love, not that we love God, but that he loved us, and sent his Son to be the propitiation ( hilasmos ) for our sins” (1 John 4:8b-10).

4. Race, grace, and justice. One of the best responses to “No Squishy Love” is a piece by my friend Russell D. Moore, “Whatever happened to the wrath of God?” published in The Washington Post . Moore points out that the wrath of God is inextricably linked to the justice of God and that this is true not only in the event of the cross but also throughout human history. He cites the Civil War-era hymn “The Battle Hymn of the Republic,” in which God is said to be “trampling out the vintage where the grapes of wrath are stored.” As Lincoln did in his Second Inaugural, this hymn takes the issues of slavery and the war out of their immediate political context and describes them in the light of moral accountability and divine providence. Just so, Moore writes, “the Civil Rights movement grounded its non-violent resistance to Jim Crow wickedness with language about the wrath of God. Martin Luther King, Jr. spoke out against the fire hoses and dog attacks of the Alabama police forces by saying, ‘we will leave them standing before their God and the world splattered with the blood and wreaking with the stench of our Negro brothers.’ King was pointing a professing Christian populace to a judgment seat.” Without an operative understanding of the wrath of God, we are left only with identity politics when confronted by evil and injustice in our world.

5. “ But what doth it help thee now, that thou believest all this?” This is the crucial pastoral question posed by the Heidelberg Catechism (Question 59). Some Presbyterian leaders, as well as those of other denominations, have said that this current flap over the atonement could be useful if it leads to more discussion and deeper understanding about the reconciling work of God in Christ. I agree, and I hope it will. Theological speculation seldom yields spiritual fruit. To contemplate Jesus Christ and the work he accomplished in his self-sacrifice on the cross will issue in a life of gratitude, worship, and thanksgiving. It glorifies the God who loves us unto death and again unto life. How better to express this point than to sing it? “In Christ Alone” is not the only great contemporary hymn with theological substance. Here is another one (also by Stuart Townend), “How Deep the Father’s Love for Us.”

How deep the Father’s love for us,
How vast beyond all measure
That He should give His only Son
To make a wretch His treasure

How great the pain of searing loss,
The Father turns His face away
As wounds which mar the chosen One,
Bring many sons to glory

Behold the Man upon a cross,
My sin upon His shoulders
Ashamed I hear my mocking voice,
Call out among the scoffers

I will not boast in anything
No gifts, no power, no wisdom
But I will boast in Jesus Christ
His death and resurrection

Why should I gain from His reward?
I cannot give an answer
But this I know with all my heart
His wounds have paid my ransom.

Timothy George is dean of Beeson Divinity School of Samford University and general editor of the Reformation Commentary on Scripture . His email address is tfgeorge@samford.edu .