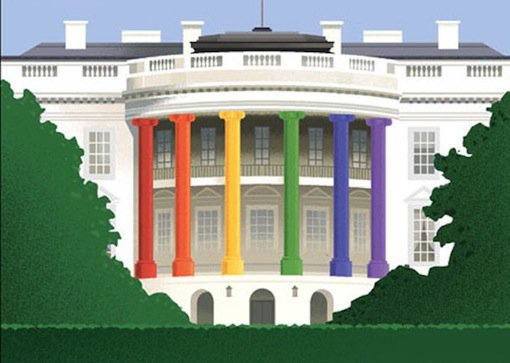 Same sex marriage has become the issue of our time. Michael Kinsley summed the situation nicely: “You may be in favor of raising taxes on the rich, increasing support for the poor, nurturing the planet, and repealing Section 14(b) of the Taft-Hartley Act, but if you don’t support gay marriage, you’re out of the club.”

How did this come to pass? There’s no easy answer, which is not surprising. Same sex marriage is the issue because lots of different interests, concerns, and trends converge on it.

The first thing to say is that the gay rights movement has been largely an upper middle class project. Thurgood Marshall attended Lincoln University, an all-black college in southeastern Pennsylvania, and then Howard University Law School. Gay activist Larry Kramer went to Yale. Judge Vaughn Walker went to Stanford Law School. I have little doubt that the first gay Supreme Court Justice will be a graduate of either Yale or Harvard Law Schools.

There are many reasons why the gay rights movement is so upscale. When I was active in the national politics of the Episcopal Church, I came to see that homosexuality in general plays an important symbolic role in upper middle class culture. It’s an image of transgression, and to affirm it relieves moral pressure, giving room for our own transgressive desires. If two men can have sex, then surely there are no traditional limits on what men and women can do.

Against this background of transgression same-sex marriage reassures. It provides a bourgeois context, domesticating homosexuality and folding it back into ordinary patterns of bourgeois discipline. As so, for the typical bourgeois Episcopalian, supporting gay rights was a way of reinforcing his conviction that expanded sexual freedom can be made entirely consistent with the modes of social control that predominate among successful Americans.

He’s probably right. Today, getting and staying rich has supplanted older and more multifaceted status markers, many of which relied on the religious and moral dimensions of traditional culture. As a consequence, the modes of social control that now operate in the upper reaches of society are largely economic and morally thin. Having the right self-discipline”and especially the right education”matters a great deal. To the extent that virtues matter, it’s those that conduce to personal success or the social cooperation necessary in a complex economy.

We should not underestimate the new power of this economic discipline. I began teaching upper middle class students in 1990. Over the next twenty years their economic anxiety increased dramatically. They were intuiting the new ways our society rewards and punishes people economically. The winners now win big; the losers lose big. In 1990 that was not obvious but by 2010 it was, and my students very much wanted to be sure to be on the winning side.

In this context of heightened economic discipline”it’s very palpable here in New York and entirely accepted and affirmed by the well-educated twenty-somethings who flock here”it’s not surprising that we see people cherishing compensatory freedoms. The hard-working twenty-somethings have tattoos, dye their hair weird colors, and want to organize their intimate lives without rigid limits and invasive rules.

Redefining marriage becomes an obvious imperative, but not because of abstract claims about equality. It’s a powerful institution that disciplines us, not only sexually, but in many other intimate ways as well. Today many, perhaps most, want this power to serve our freedom. Thus our new cultural ideal, which is by no means limited to gays and lesbians: marriage is the creation of the love of individuals, not an institution with rigid roles and rules.

In this larger project of redefinition, same-sex marriage has symbolic importance. Its victory in the public square marks the triumph of a freedom for everybody to make of their intimate lives what they wish.

These reflections discount the imperatives of justice, which many people feel quite authentically, and for reasons that, within our present, impoverished way of thinking about justice, are entirely sensible.

But it’s always important to ask why some imperatives of justice become decisive”even to the point of blacklisting those who dissent, as we see happening today with gay rights”while others don’t. Why, for example, is nobody interested in the fact that the life expectancy of white Americans is collapsing in an unprecedented way? It’s because their problems are remote from upper middle class Americans and aren’t relevant to their psychological needs.

Same-sex marriage, gay adoption, sexual freedom? We’re under tremendous pressure to affirm these goals because the top level of society is turning in on itself. As is always the case when society isn’t facing external threats or internal chaos, the powerful seek greater freedom, because they’re the ones in the best position to take advantage of it.

True, the Left wants a finely woven safety net for those who use their freedoms unwisely, while the Right tends to go the other direction, arguing that people need to suffer the consequences of their choices so that they’ll make better choices in the future. But the political and policy differences operate mostly on the surface. At a deeper level our leadership class is consolidating around a generally libertarian outlook that accepts and affirms ways in which the authority of the marketplace and its ministering disciplines have superseded the older authorities.

Thus sexual freedom fits nicely with economic freedom. The former makes people happier; the latter makes society richer”or so we now believe. It’s telling that an increasing number of Republicans are affirming the former. It’s a political shift that follows Bill Clinton’s transformation of the Democratic Party into a grudging proponent of the latter.