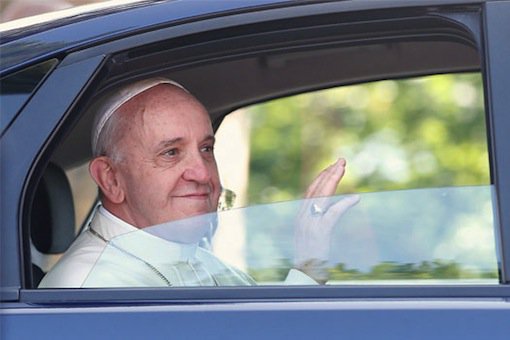 Of all the challenging things Francis has said since becoming pope, none has been more quoted than this line : “How I would like a Church which is poor, and for the poor!”

Simple and direct, it perfectly captures the spirit of Francis’ new pontificate. And what gives it such power and meaning is the personal witness behind it.

Francis’ sparse and austere lifestyle is well-known: As archbishop of Buenos Aires, he shunned limousines and chauffeurs, opting instead for public transportation. Rather than live in the bishop’s residence, he chose a modest apartment. After becoming cardinal, he continued his own grocery shopping and even cooked his own meals.

Elevated to the Chair of St. Peter, many expected him to change habits, but Francis declined. He insisted on paying his own hotel bill, carrying his luggage, and living in a Vatican guesthouse rather than the Apostolic Palace.

Had he left it at that, many would have noted the new pope’s frugal lifestyle and commended his humility. But Francis has done something more: He challenged others to live more modestly themselves.

In a speech last month, Francis warned religious that following the latest fashions, in technology or dress, was not the route to happiness , much less suitable for their state in life:

It hurts me when I see a priest or a nun with the latest model car . . . . A car is necessary to do a lot of work, but please choose a more humble one. If you like the fancy one, just think about how many children are dying of hunger in the world.

Familiar as these comments should be”who hasn’t been told by their parents not to be wasteful, with so many people starving in the world?”they sparked a mini-uproar. Francis was rebuked by defenders of the auto industry, who pointed out that he himself recently received the keys to the expensive popemobile; was accused of bad economics , since inexpensive cars often break down and harm the economy; and certain traditionalists asked how he could be raising such trivial concerns when there was so much dissent going on in the Church.

Never mind that Francis has already cut his use of the popemobile (developed for the pope’s safety, not comfort), or that he never said one should buy a cheap, unworkable car (only a modest one), or that he has already indicated he will brook no dissent on essentials of the faith . Francis clearly touched a nerve, and his critics, both in and outside the Church, felt it.

In fairness to those who respectfully question Francis, the Church has never forbidden all examples of splendor, especially those which pay homage to God: Jesus graciously accepted the alabaster jar of very expensive perfume, even as those around him objected; and when it comes to the liturgy, sometimes more is more. As one commentator wrote in a spirited exchange with back-to-simplicity campaigners:

I agree that clerics should be humble and have a poverty of spirit in their everyday lives. I do not understand, however, why progressive Catholics are so bothered by formal liturgical dress . . . . Human beings are physical creatures who perceive through their senses. The Church has always had a physical sacramentality to reflect this fact. Liturgical ‘pomp’ . . . serves to elevate the mind of the worshipper to God, to beauty and the sacred. If the priest and the congregation wear shabby clothes and vestments to mass there will be no elevation of the spirit via the senses, no physical reminders that the mass is different than going to a ball game, that the Eucharist is the source and summit of our Faith.

One trusts that Francis appreciates this fact, even if he himself prefers more low-key, reverent Masses.

That said, the Pope deserves praise for speaking out against conspicuous consumption and urging religious to adopt a more humble way of life. Following the example of Our Lord, the saints and doctors of the church have always stressed the Beatitudes , the first of which is “Blessed are the poor in spirit, for theirs is the kingdom of Heaven.” The need for personal sacrifice and discipline, in order to serve others, is at the very heart of the Gospel and should inspire every Christian, especially priests.

Historically, and continuing in our day, great harm has been done to the Church by an association with wealth and privilege. No one identified the problem better than St. Catherine of Siena, who, in a passionate letter to Pope Gregory XI on the reform of the clergy, wrote these searing words :

Alas, what confusion is this, to see those who ought to be a mirror of voluntary poverty, meek as lambs, distributing the possessions of Holy Church to the poor: and they appear in such luxury and state and pomp and worldly vanity, more than if they had turned them to the world a thousand times! Nay, many seculars put them to shame who live a good and holy life . . . . Holy Church should return to her first condition, poor, humble, and meek as she was in that holy time when men took note of nothing but the honor of God and the salvation of souls, caring for spiritual things and not for temporal. For ever since she has aimed at more temporal than at spiritual, things have gone from bad to worse.

Many of Francis’ predecessors have also made sacrifices and eschewed comfort. Among the most memorable examples is what Pius XII did during the Second World War. Sr. Margherita Marchione writes :

Out of solidarity with the miserable conditions of the people, he did not drink even a single cup of coffee, knowing the people had no coffee. He knew that heating fuel was in short supply, and he ordered the papal apartment to be kept without heat, even during the winter. During the war he did not take any vacations and did not go to Castelgandolfo.

Instead, Pius opened up the large papal residence for thousands of poor and persecuted people, who subsequently thanked him for saving their lives.

The outpouring of love and affection that has greeted Francis’ pontificate has a great deal to do with his modesty and commitment to the poor, and already prompted one priest to sell his luxury car . Leading churchmen have said that Francis has caused them to rethink their own elegant lifestyles , and at Commonweal , Michael Garvey argues persuasively that Francis’ words shouldn’t be restricted to the clergy, but should motivate everyone:

When the newly elected Pope Francis said that he longs for a Church that is poor and for the poor, he undoubtedly had overdressed and bejeweled cardinals, careerists bishops, and cufflink priests in mind, but he was addressing all the rest of us, too. Just because I don’t sit on a Bernini throne, keep a limo driver on hold or have a staff of vowed religious waiting on me at dinnertime doesn’t mean that I have no ballast to throw out, no occluded lifestyles to simplify, open up and focus.

To those who fear Francis’ approach is diminishing the papacy and forgoing things necessary to protect Christianity, one need only consult the Gospel of St. Matthew :

Do not store up for yourselves treasures on earth, where moths and vermin destroy, and where thieves break in and steal. But store up for yourselves treasures in Heaven, where moths and vermin do not destroy, and where thieves do not break in and steal. For where your treasure is, there will your heart will be also.

Pope Francis knows where our true riches lie, and by humbling himself and renouncing so many pleasures in this world, he is in fact elevating the papacy and attracting souls to Christ in ways that truly befit his leading representative on earth.