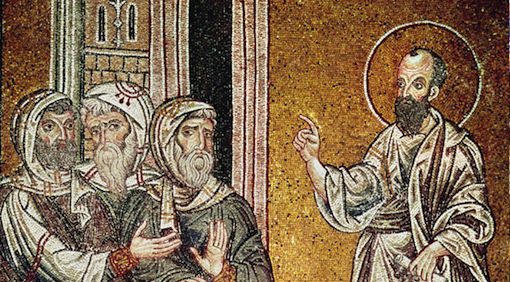 Scholars have long noted the contrasting portraits in the Bible of the Apostle Paul’s public speaking abilities. Acts depicts him as a bold and powerful rhetorician while Paul’s own letters tell a dramatically different story. His letters are rhetorical gems, but he did not think he was a polished speaker. Paul presents himself as one best known for the hard work of organizing small groups of new Christians rather than for persuasive proclamations in open theaters and forums. The difference between these portraits is one major reason why many scholars doubt the historical validity of Acts. There is, however, a simple way to reconcile them. Paul suffered from what is commonly known as stage fright.

According to Luke, the author of Acts, Paul displayed heroic speaking skills in the face of large and hostile crowds. Most scholars think that Luke was influenced by the conventions of Greek historical writing, which included a heavy use of reconstructed speeches. Luke was trying to make sense of the church’s early successes, and thus he heightened the tension between Greek expectations and Paul’s performances. The people of Athens, for example, are described as spending “all their time in nothing but telling or hearing something new” (17:21). This is an obviously hyperbolic statement (“all the time”) but it is also ironic, given Luke’s conviction that Christianity is the true novelty. When the Athenians first meet Paul, they ask, “What does this babbler want to say?” (17:18). Luke likewise appears to exaggerate Paul’s rhetorical prowess, insisting that Paul preached “with all boldness and without hindrance” (28:31). That almost sounds defensive, like Paul has something that Luke wants to hide.

Paul is the hero in Acts and his sermons provide the turning points in the narrative, right up to the grand judicial gesture of appealing to Caesar (25:10). The letters record another side of Paul. In his first letter to the church at Corinth, for example, Paul responds to conflict caused by the rise of a popular teacher named Apollos. Apollos was a model rhetor, while Paul apologizes that he did not come to the Corinthians “with eloquent wisdom” (1:17). Paul writes like someone trying to master with his pen what he could not communicate with his tongue. He says as much in his second letter to the Corinthians: “I who am humble when face to face with you, but bold toward you when I am away!” (10:1). Paul’s letters were dramatic, but not his personal presence. Perhaps Luke was trying to translate Paul’s epistolary skills into the more public activity of public speaking.

Paul himself tells us that others thought his speaking “contemptible” (2 Cor. 10:10) and justifies himself by explaining that he was “untrained in speech, but not in knowledge” (2 Cor. 11:6). Perhaps his physical infirmity (Galatians 4:13 and 2 Cor. 12:7) was some kind of speech defect like stuttering or speaking anxiety (or a combination of the two). Stage fright was not unknown in the ancient world. Moses battled with public speaking phobia, pleading with God to spare him a leadership role because of his lack of eloquence (Exod. 4:10 and 6:12). Cicero went through a phase of stage fright, and Augustine lost his voice when contemplating his Christian conversion, until God “rescued his tongue” ( Confessions , trans. R. S. Pine-Coffin, p. 185).

If Paul suffered from stage fright, then the incongruities between Acts and his letters make a lot of sense. In fact, they disappear altogether. Those who battle public speaking phobia can come across as powerful speakers precisely because they work hard at masking their fear. Speaking phobia is easy to hide from others, but it is an inward struggle that can be incredibly debilitating. A speaking disability would have been especially catastrophic for a man dedicated to a public ministry. In any case, Paul, like many great writers, often found that writing compensates for problems with face-to-face communication.

If I am right, what is the theological lesson to be learned? Perhaps Paul’s insight into the liberating power of God’s word, and the necessity for giving voice to the faith, came as he experienced the humbling experience of speaking phobia. He knew he had to rely on Christ to speak through him, and thus his strength came through his weakness. God chooses the humble to make folly of the proud and gives a voice to the voiceless. Christians are called to echo the Word. As Paul wrote, “I believed, and so I spoke” (2. Cor. 4:13).

Stephen H. Webb is a columnist for First Things . He is the author of Jesus Christ, Eternal God and, forthcoming, Mormon Christianity . He is also the author of The Divine Voice: Christian Proclamation and the Theology of Sound .