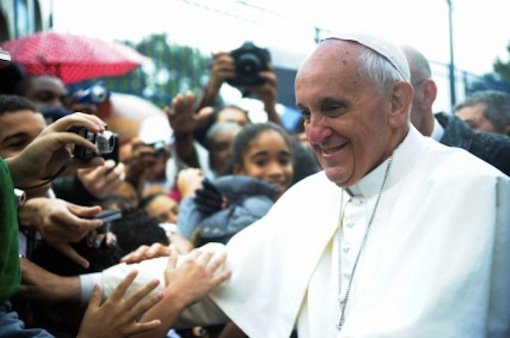 Friday saw the release of a fairly extensive interview with Pope Francis. The media was atwitter and reported the interview as a sign of a something big, something new. Some swooned. Perhaps this is the sign of the beginning of a long hoped-for liberalizing trend in the Church. Not likely. The Pope calls himself “a son of the church,” whose teachings are “clear.” But the tone is mobile, the rhetoric fluid, and he uses terms and phrases from the standard playbook of progressive reform. Thus, the media’s reading of the interview isn’t willful.

When Pope Francis was elected a friend asked me what to expect. “Strap on your seatbelt,” I replied. The comment didn’t reflect any special knowledge of Jorge Bergoglio. But I know Jesuits. They tend to be extremists of one sort or another. They’re trained to speak plainly, directly, and from the heart rather than according to the standard script.

Many passages in this interview reflect Pope Francis’ identity as a Jesuit. He speaks about himself in frank, personal ways that have the ring of authenticity. I don’t mean his comment that “I am a sinner,” which some secular commentators imagine a novel modesty. That sort of remark is Christianity 101. Instead, I mean: “I am a bit astute . . . but it is also true I am a bit naïve.” “I am a really, really undisciplined person.”

We’re not dealing with a modern politician who surrounds himself with handlers and carefully stays “on message.” Pope Francis is relatively unfiltered. He’s also not entirely self-consistent. That’s not a criticism. Only a person who carefully regulates what he feels, thinks, and says can maintain rigorous consistency in his public persona and public statements.

By my reading, Pope Francis was being a bit naïve and undisciplined in parts of this interview, which although reviewed by him before publication has an impromptu quality I imagine he wished to retain. This encourages a distorted reading of what he has in mind for the Church. This is a problem related, perhaps, to his Jesuit identity.

A key passage involves his image—a very helpful one—of the Church as “a field hospital after battle.” He observes that in such a circumstance we need to focus on healing as best we can. Some of the protocols and procedures fitting for a hospital operating in times of peace need to be set aside.

He then digresses into fairly extensive reflections on what the Church needs in the way of pastoral leadership in this situation: “pastors, not clergy acting like bureaucrats or government officials.” We’re not to allow ourselves to fixate on “small things, in small-minded rules.” The Church needs to find “new roads,” “new paths,” and “to step outside itself,” something that requires “audacity and courage.”

These and other comments evoke assumptions that are very much favored by the Left, which is why the interview has been so warmly received, not only by the secular media, but also by Catholics who would like the Church to change her teachings on many issues.

Such comments by Francis do not challenge but instead reinforce America’s dominant ideological frame. It’s one in which Catholics loyal to the magisterium are “juridical” and “small-minded.” They fear change, lacking the courage to live “on the margins.” I heard these and other dismissive characterizations again and again during my twenty years teaching at a Jesuit university. One of my colleagues insisted again and again that the greatest challenge we face in the classroom is “Catholic fundamentalism,” when in fact very few students today even know the Church’s teachings, much less hold them with an undue ardency.

It’s in this context that Pope Francis makes extended observations about the profound pastoral challenge of ministering to gay people today, to which he adds the personal statement that he cannot judge a homosexual person who “is of good will and is in search of God.” He also speaks of other pastoral challenges: a divorced woman who has also had an abortion. These are subtle remarks, and necessary ones.

He sums up this section with statements about the witness of the Church today. They are the ones most often quoted: “We cannot insist only on issues related to abortion, gay marriage and the use of contraceptive methods.” “It is not necessary to talk about these issue all the time.”

In themselves these statements are obvious and non-controversial. Since my entry in the Catholic Church in 2004, I have heard some homilies on abortion, gay marriage, and even one on contraception. But these are infrequent. For the most part priests expound the mystery of Christ, which, as Pope Francis emphasizes, is the source and foundation of our faith. Without Christ at the center, the Church’s moral teachings can quickly become mere moralism.

But Pope Francis has been undisciplined in his rhetoric, casually using standard modern formulations, ones that are used to beat up on faithful Catholics—“audacity and courage” means those who question Church teachings, the juxtaposition of the “small-minded” traditionalists to the brave and open liberals who are “in dialogue”, and so forth. This gives everything he says progressive connotations. As a consequence, American readers, and perhaps European ones as well, intuitively read a progressivism into Pope Francis’ statements about abortion, gay marriage, and contraception. Thus the headlines.

This is not helpful, at least not in the field hospital of the American Church. We face a secular culture that has a doctrine of Unconditional Surrender. It will not accept “talking less” about abortion, gay marriage, and contraception. The only acceptable outcome is agreement—or silence. Dialogue? Catholic higher education has been doing that for fifty years, and the result has been the secularization of the vast majority of colleges and universities. Today at Fordham or Georgetown, the only people talking about contraception, gay rights, or gay marriage are the advocates.

The Holy Father is trying to find his way—we’re all trying to find our way—in a sometimes (but not always, as he rightly emphasizes) hostile secular culture. That Francis will make mistakes is certain. He says as much himself. I think he has in this interview.

Perhaps this and other mistakes are to be expected. He warns us that we all must risk mistakes if we’re to bear witness to Christ in the world. We must sow the seed of the Gospel and see where it grows, which is how I read the spirit of his remarks in this interview. To a certain degree we must be a bit naïve to scatter seed promiscuously, hoping it will take root even as we know the soil rocky. But I don’t doubt Pope Francis is also a bit astute. He’ll see what’s fruitful and tend the fragile shoots of faith where the Gospel takes root.

R.R. Reno is editor of First Things. He is the general editor of the Brazos Theological Commentary on the Bible and author of the volume on Genesis. His previous “On the Square” articles can be found here. Image via Wikimedia Commons.