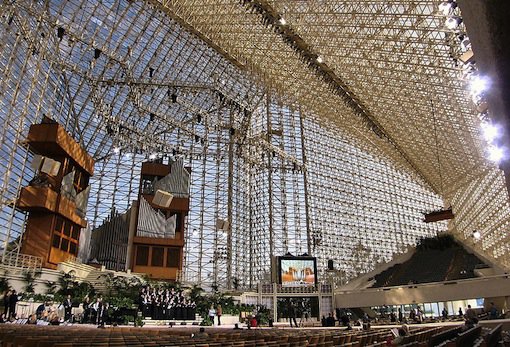 “America loves success stories.” This is how a 1983 admiring profile of the famed Robert Harold Schuller began. And back in 1983 “Bob” Schuller, as his friends called him, was certainly successful. The son of pious Dutch Reformed parents, Schuller was born on a farm in Sioux County, Iowa, in 1926. That was one year before Sinclair Lewis published Elmer Gantry , a satirical novel about a ne’er-do-well preacher from Kansas. Though Schuller would match Gantry in exuberance and flamboyant style, he was no charlatan. Educated at his denomination’s flagship schools, Hope College and Western Theological Seminary, Schuller was already a proven pastor before being sent by the Reformed Church in America to plant a new congregation in Orange County, California.

Orange County was the home district of Richard Nixon. In the decades following Schuller’s arrival there, it became a bastion not only of political conservatism but also of what one scholar has called a “culturally adaptive biblical experientialism.” No Christian minister was more adaptive or more experientialist than Robert H. Schuller. And none was more successful.

The story of his ministry is the stuff of legend. Garden Grove Community Church began in 1955 when Schuller rented for $10 per week the Orange Drive-In Theater, a well-chosen site near the just-opened Disneyland. Drive-in theaters were the rave across the country then. “Come as you are in the family car” was an early Schuller slogan. Schuller preached from the tarpaper rooftop of the snack bar while his wife Arvella played a portable organ.

And come they did, not only to what was billed as the nation’s first walk-in/drive-in church, but also to Schuller’s expansive television ministry called “The Hour of Power.” In his prime on “The Hour of Power,” Robert Schuller was spectacular. He appeared each Sunday in flowing robes, with a booming resonant voice and sweeping gestures, while surrounded by fountains that splashed at a button’s push and a thousand-voice choir that sang some of the best religious music on television. At its height, “The Hour of Power” was the most watched religious television program in the world, seen by an estimated 30 million people on hundreds of stations around the globe.

To the fanfare of trumpets and the sublime music of “The Heavens are Telling,” Schuller dedicated the Crystal Cathedral on Sunday, September 14, 1980, just before California’s governor, Ronald Reagan, was elected as President of the United States. This amazing structure, designed by famed architect Philip Johnson, boasted 10,661 silver-tinted windows supported by a filigree of steel. The windows shimmered in the light that sun-filled day. The Crystal Cathedral, Schuller said at the time, was to be “a monument to mountain-moving faith,” a “star-shaped sanctuary sparkling in the sun” which would stand for centuries to come.

Today the building still stands, but the church is shattered. In October 2010, the church entered Chapter 11 bankruptcy, citing indebtedness of more than $50 million dollars. The following year, the 34-acre campus was sold to the local Catholic diocese for $57.5 million. Catholics have been in the business of converting auspicious buildings into sacred space ever since the Pantheon in Rome was transformed into a house of worship, but this is the first time an evangelical megachurch will have become a Catholic cathedral.

The breakup of the Schuller dynasty and internecine feuding within the family have made matters much worse. The story is almost too painful and too shameful to recount: father and heir-apparent son going their separate ways over who gets to preach in primetime; daughters and sons-in-law with their own grievances, complaints, and lawsuits; granddaughter Angie Schuller Wyatt’s provocative new book, God and Boobs: Balancing Faith and Sexuality , followed by the cancellation of her appearance on “The Hour of Power”; Schuller and his wife cutting all ties with the ministry he had founded nearly sixty years ago; and, of late, the announcement that he is being treated for esophageal cancer. Such troubles could justify a lamentation by King Lear, “Blow, winds, and crack your cheeks! rage! blow!/You cataracts and hurricanoes, spout/Till you have drenched our steeples, drowned the cocks!” ( King Lear , 3.2.1).

Robert Schuller has had critics aplenty, and he has given them a lot to work with”shallowness, showmanship, and pomposity. But the tone of the most raucous critics leaves much to be desired. The fact is, Schuller’s ministry has been admirable in many ways. Who can fault him for trying to reach out to the unchurched? His suicide prevention work was a pioneering ministry of mercy. His inviting Mark Driscoll, a younger Reformed pastor from a different quadrant of the evangelical family, to preach in his pulpit was a surprising initiative. Many testify to having been brought to a living relationship with Jesus Christ through Schuller and the Crystal Cathedral. I do not doubt their testimony, even if perhaps the Holy Spirit had to work overtime “in, with, and under” (to use Luther’s eucharistic prepositions) all the evangelical fluff.

The implosion of the Crystal Cathedral can be explained in many ways”dysfunctional family dynamics, financial hard times, lack of wise leadership, and a changing religious climate. Moreover, today’s digital generation has no time for a whole “hour” of power from anyone”two minutes on YouTube is enough! But long before the Crystal Cathedral filed for bankruptcy, another kind of insolvency was at work eating away at the soul of the enterprise. And here the critics are right.

Building on the self-actualization theories of Abraham Maslow, Schuller rode the crest of the human potential movement in the fifties and sixties. The deepest dilemma faced by men and women, Schuller thought, was the unsatisfied quest for human glory, the desire for self-esteem. In this schema, Jesus is the ideal ego-tripper, Self-esteem Incarnate. As Schuller once said to Phil Donahue, “Jesus had an ego. He said, ‘I, if I be lifted up, will draw all men unto Me.’ Wow, what an ego trip he was on!” Schuller was also fond of saying that Jesus never called anyone a sinner. But red-letter words like “evil ones,” “hypocrites,” “blind guides,” “serpents,” “children of the devil,” and “adulterous and sinful generation” are not exactly compliments.

Schuller’s campaign to “positivize” the offending terminology of the Bible led not only to the dumbing down of the faith but also to its gutting out. It resulted in the de-sacrilization of salvation, which was a popular move in an increasingly secularized culture. In the sunny clime of suburban Southern California, it was a perfect fit”at least for a while. His bromides were cute. Instead of Jesus’s beatitudes, Schuller gave us “be happy attitudes.” Nevermind all that stuff about mourning and martyrdom, the hungry and the poor. Schuller also taught us that “tough times never last but tough people do,” deftly ignoring the fact that tough times can indeed last for a very long time, and that tough people crack and break just like anyone else. Schuller never learned what Karl Barth said about the liberal theology of his day, namely, that one cannot get God by saying man in a louder voice. He never understood what Richard John Neuhaus knew and put so well: “Something has gone dreadfully wrong with the world, and with us in the world.” At the end of the day, we are not only sick, we are lost; what we need is not a mere therapist, but a Savior.

Evangelicals do not do succession well. Just think of Charles Spurgeon, D. L. Moody, Oral Roberts, and a host of others. And so now, the Crystal Cathedral belongs to the Roman Catholic Diocese of Orange (a color that might make some Irish Catholics a bit queasy!). I applaud Schuller for agreeing to sell his building to Catholics, for whom succession of a certain kind is a big deal, rather than to an institution that would give no assurances of preserving its character as sacred space.

The name of the Crystal Cathedral has been changed to Christ Cathedral”a good move. The transformation of the church’s worship space into something more appropriate for Catholic liturgical life has already begun. It will be a challenging venture. The soaring, postmodern architecture of the Crystal Cathedral conveys transcendence and translucence, but not so much mystery or intimacy. It was designed more for pulpit oratory than prayerful meditation. It is suited more for celebration than repentance.

The Catholic diocese, like Schuller himself, wants to use the space to reach the unchurched with the message of Jesus and provide spiritual uplift to those in need. This is a worthy goal, one consonant with the New Evangelization. In fact, the Catholics might have a better chance of fulfilling this goal than their famous predecessor. And yet it would be foolish to suppose that the Christian witness of Christ Cathedral, under new management, will be spared the temptations which beset Robert Schuller and his ministry over the past half-century. The spirit of the age is nondenominational.

And what shall we say to Dr. Schuller? One of his daughters has reported that he is in a reflective mood in light of his health problems. We wish him well with those struggles and in every way. What Schuller has said to so many others across the years, we sincerely say to him, “God loves you and so do we.” Perhaps he can find special solace in revisiting Question 1 of the Heidelberg Catechism, one of the great documents of the Protestant Reformation and a confessional standard of Robert Schuller’s boyhood church. I am sure he must have memorized this as young lad in Iowa:

Q: What is your only comfort, in life and in death?
A: That I belong”body and soul, in life and in death”not to myself but to my faithful Savior, Jesus Christ, who at the cost of his own blood has fully paid for all my sins and has completely freed me from the dominion of the devil; that he protects me so well that without the will of my Father in heaven not a hair can fall from my head; indeed, that everything must fit his purpose for my salvation. Therefore, by his Holy Spirit, he also assures me of eternal life, and makes me wholeheartedly willing and ready from now on to live for him.

Timothy George is dean of Beeson Divinity School of Samford University and general editor of the Reformation Commentary on Scripture . His email address is tfgeorge@samford.edu. Image via Wikimedia Commons.