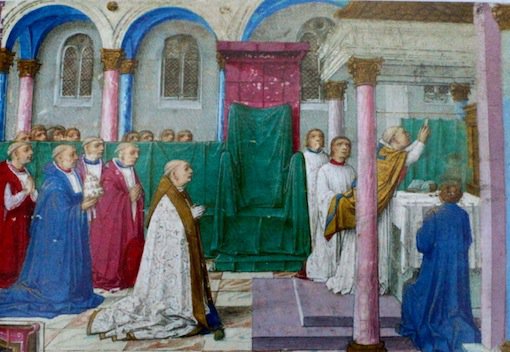 The Church of Our Saviour in Manhattan has discontinued offering Mass in the extraordinary form, also known as the traditional Latin Mass, the Tridentine Mass, and the Mass of Blessed Pope John XXIII. Fr. George Rutler offered it on Sundays at 9 a.m. when he was pastor of Our Saviour.

Earlier this summer, it was announced that Fr. Rutler was being transferred to another parish. Assuming that Our Saviour was losing the Tridentine Mass too, I asked him whether I could post a sign-up sheet in the vestibule so that those of us who regularly attend could join to present ourselves as a “stable group” (see below, about Summorum Pontificum ) to the new pastor and request that the Mass be continued. No sign-up sheet would be necessary, he said, because Fr. Robert Robbins, the new pastor, wanted to keep the extraordinary form. Fr. Rutler indicated that it might not last long, however, because the congregation (60 to 80 people) for it was relatively small and the collection-plate offering per congregant was low.

It turns out that my instinct to ask about a sign-up sheet was correct; I should have asked Fr. Rutler whether I could go ahead with it anyway. This past Sunday, we were informed that we were attending the last Mass in the extraordinary form at Our Saviour. We were invited to attend it where it’s offered elsewhere in the city. By 10:30 a.m., we were scattered to the four winds. The possibility of our ever reconstituting ourselves as a stable group of faithful who would have standing to request that Fr. Robbins resume the Tridentine Mass looks rather remote.

Pope Benedict XVI in his apostolic letter Summorum Pontificum (2007) wrote that the pastor of a parish “where there is a stable group of faithful who adhere to the earlier liturgical tradition . . . should willingly accept their requests to celebrate the Mass according to the rite of the Roman Missal published in 1962.” Benedict went on to stipulate that the pastor should “ensure that the welfare of these faithful harmonises with the ordinary pastoral care of the parish””the pastor must exercise judgment, in other words, in how he responds to the group. Presumably he can deny their request if he thinks Mass in the Forma extraordinaria at his parish would conflict with the life of the parish as a whole.

Mass according to the 1962 missal demands a knowledge of the Latin texts and of some fairly intricate rubrics. It requires training that most priests now lack. Fr. Rutler didn’t, and Fr. Robbins apparently does. Since August 1, when Fr. Robbins took over at Our Saviour, the parish has been recruiting priests to say Mass in the extraordinary form but has not been able to find one “willing to do this on a regular basis,” according to the church bulletin.

Back when Summorum Pontificum was promulgated, the loosening of restrictions on when the Tridentine Mass could be celebrated led some who loved it to overestimate its imminent renaissance. A Jesuit priest at the time told me that the availability of the Mass of Blessed Pope John XXIII, as he preferred to call it, would be a function primarily of how many priests were able and willing to say it, not of how many faithful were requesting it. So it is. The priest shortage in the United States is widely recognized, but within that problem is the further problem, not so widely recognized, that there aren’t enough priests who can and will meet the demand for the traditional Latin Mass.

A surprising number of seminarians are asking to be trained in it, according to some reports, so in ten years the priest shortage at least in that department might be less acute than it is now. Last week a diocesan priest who had recently returned from the Pontifical North American College in Rome told me that a third or more of the seminarians there have expressed interest in the extraordinary form. He compared that with his seminary experience in the 1990s, when curiosity about the Tridentine Mass was treated like curiosity about plutonium: “Call the authorities. It may be innocent, but keep a watch on him.”

American Catholics already enjoy greater availability of the extraordinary form than do Catholics in most other countries. Apparently the demand for it is higher here than elsewhere. It’s hard to say why. As Pope Benedict noted drily in his letter accompanying Summorum Pontificum , ”The use of the old Missal presupposes a certain degree of liturgical formation and some knowledge of the Latin language; neither of these is found very often.” The extraordinary form is difficult in the way that anything that’s rewarding but exacting is difficult, like classical music when what we know is mainly popular music.

At Mass in the ordinary form, we experience it as something that projects itself from the sanctuary into the pews: It meets us halfway. At Mass in the extraordinary form, “Introibo ad altare Dei,” I will go to the altar of God. In the United States, a number of Catholics higher than anyone might have predicted from a survey of Catholics worldwide prefer to do the harder thing. Call it American exceptionalism.

Nicholas Frankovich is an editor at National Review .