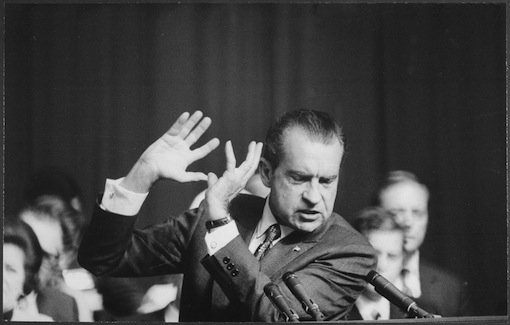 Last Monday night I dreamed I drove Richard Nixon to the Kansas City International Airport after he’d delivered a speech in KC. I had offered him our guest room to stay the night, but”despite his schmaltzy cocker spaniel speech in 1952”he apologetically claimed a pet allergy and could not possibly abide our cocker spaniel, though he was certain she was a charming and disciplined animal. She isn’t, but in a dream many things are dreamlike.

He did ask if I wouldn’t take him to the airport afterward if it wasn’t too far out of my way going home. I told him our house is but two interstate exits from the airport and right on the way. So I dropped him off at the U.S. Airways gate and went home. He didn’t offer to pay gas.

I can’t say exactly where his dream speech was delivered. The place reminded me of the venue First Things uses for the Erasmus Lectures. Richly paneled and bespeaking an understated dignity that comes with age, importance, and huge endowments. The dinner matched the luncheon sandwich buffet served to the Erasmus symposium group the next day, including that marvelous squash soup. I had two bowls of that. I asked if I could get the recipe, but nobody was giving that away. Oh, that wasn’t the dream; that was real. But, dreamwise, Nixon and I bumped elbows at the buffet and fell into a warm, friendly conversation. We shared the same table until he was called to the podium.

It was a very good speech, especially from a man who has been dead since 1994. But, like the folk song, he was as “alive as you and me.” I went looking for him after the speech and found him inspecting the carbonator connections at the soda dispenser.

His speech”mind you, it was a dream and came all in a flash”put me back to May 1972. The Strategic Arms Limitations Talks ( SALT ) with the Soviet Union were then underway. Earlier that year Nixon had taken a national tour of China. Delicate conversations were buzzing throughout the world community. The U.S. wage and price freeze Nixon had imposed the year before seemed to tame the economy. U.S. troops in South Vietnam were being withdrawn, down to 24,000, and “Vietnamization” of the war was well along. The Paris peace talks with the North Vietnamese were making progress toward ending the war.

Still, the North Vietnamese had crossed DMZ in strength early that year, launching an offensive that South Vietnam could barely contain alone. The president announced the mining of Haiphong Harbor May 9, to be accompanied by heavy bombing that did not end until mid-October, the first air campaign since 1968. Bombing resumed over Christmas, following the November elections.

By May 1972, I had been working for a congressman but four months. I remember a worried hush in our congressional cubicles. Soviet ships visited Haiphong; what would sinking one of them mean internationally? Would the Soviets shoot back? I called home, frightened, and talked with Kansas friends and family.

Nobody, strangely, much shared my concern. Either the news had not registered or they were in deliberate denial. The world where they lived was cranking along just fine. Nixon’s approval rating hovered around 60 percent. His reelection was a foregone conclusion.

But Washington was chattering away in the tones of war-weary angst. We on Capitol Hill were in a hot house bubble where, we knew, everything important happened. And if we who lived there were worried, everybody else should be worrying too. Elsewhere, though, that wasn’t quite the way it felt, and it took me aback.

Nixon’s speech in Monday night’s dream described DC as a self-constructed plastic reality that animated the actors in the World’s Most Important Capital and, dead though he was, he concluded that in the long run, much of it doesn’t matter. He suggested we chill, just a little.

In life Mr. Nixon kept an enemies list. Being dead possibly contributed to his now longer view of things. The passions of the day, all threatening to consume us, do pass in time even if their significance lingers. Still, we would do well, maybe, to hold our sharp opinions with a lighter and more humorous grip. And if we can’t, we might at least dream about it.