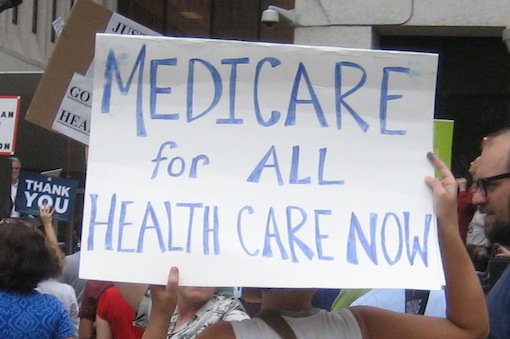 In his speech last week marking the fiftieth anniversary of Rev. Martin Luther King Jr.’s March on Washington, President Obama tried to equate the civil rights revolution with the health care revolution he has undertaken through the Affordable Care Act.

Speaking from the steps of the Lincoln Memorial where King delivered his famous “I Have a Dream” speech, the president proclaimed that economic inequality is the great civil rights struggle of our day, drawing on the Poor People’s Campaign that King led five years after the March on Washington. We can answer the call of history and complete King’s work, he said, only if we stand together and find “the courage to change . . . . With that courage, we can stand together for the right to health care in the richest nation on earth for every person.”

In other words, according to the president health care has become, in our time, a civil right, and the federal government should secure this right just as it secured other civil rights for black Americans in the 1960s. Considering the occasion of his speech, Obama’s implication is that health care is Obamacare, and opposing it is tantamount to opposing the civil rights that King and others fought so hard to secure.

This is a very different approach than arguing, as the administration usually does, that Obamacare simply makes more sense because it will lower premiums, increase efficiency, and bring more competition to the health insurance market.

Hitching Obamacare to the civil rights movement is a way for the president to dispense with these practical arguments and instead simply assert that the “right” to government-subsidized health care trumps all other claims, whether to limited federal powers, individual property rights, or free exercise of religion.

The logic behind this rhetoric is fairly straightforward: Convince people they are entitled to a benefit only the government can provide, and they will soon come to expect it no matter what the cost. This has been the fate of the other two health care entitlement programs, Medicare and Medicaid, whose growth since 1965 has accounted for nearly the entire total net growth of the federal government over the last 40 years, as Yuval Levin recently noted . To propose fundamental reform of either program, or cuts to them, is to invite the kind of scorn heaped upon Rep. Paul Ryan when he floated his ideas for partial privatization of Medicare in 2011 and 2012.

But there’s another, more urgent, reason to invoke the civil rights movement in the defense of Obamacare, and that is to shut down the opposition. In his remarks Wednesday, the president strongly implied that the debate over health care, like the civil rights debate, is now over. Dissent is not only illegitimate but also cowardly, and represents a dark era of the past. What’s needed now is the courage to secure a right everyone agrees is inviolable.

Fearful that the American people have begun to realize that Obamacare isn’t going to make health care more affordable, the administration must now justify the massive law”and its huge cost”on the grounds that health care, and specifically the entitlements promised through Obamacare, is a civil right. If that means the government has to raise taxes to help pay for costly premiums and mandated benefits, then so be it.

It also means that the right to health care is so inviolable that it trumps the right to free exercise of religion. So far, two federal appeals courts have issued opposite rulings on the contraception mandate, which is the subject of more than sixty lawsuits nationwide, according to a recent report by The Hill , and will likely end up in the U.S. Supreme Court. The government’s simplistic argument is that religious freedom applies to individuals as such, not business owners, who must set aside their moral qualms about abortion-inducing forms of birth control if they get in the way of the government’s agenda.

Here again is that same logic, but with a more sinister twist: The government’s interest in securing health care rights for all”and its prerogative in defining what counts as health care”trumps anyone’s claim to free exercise of religion if they happen to own a business.

What he meant, in the context of the health care debate, is that if you’re uninsured you need to sign up on the exchange and pay for health insurance; if you’re a faithful Catholic business owner you need to shut up and provide contraceptive coverage to your employees; and if you oppose Obamacare you should know that you’re on the wrong side of history, and the debate is over.

John Daniel Davidson is a policy analyst for the Center for Health Care Policy with the Texas Public Policy Foundation , a non-profit, free-market research institute based in Austin, Texas. He may be reached at jdavidson@texaspolicy.com . Image via Wikimedia Commons.