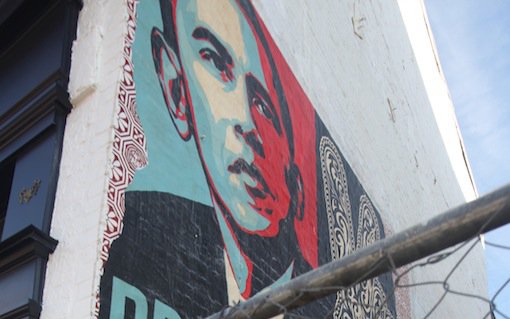 In 2012, despite a more favorable political environment, Mitt Romney managed to do worse among Latinos and Asian-Americans than John McCain in 2008. Romney’s voters skewed older than Obama’s and will likely be dying off faster. The younger cohorts are increasingly nonwhite, and Obama won enormous margins among nonwhite voters. As time goes on, Republicans will have to win over some people who either voted for Obama or whose parents voted for Obama.

The liberal writer Jamelle Bouie suggests that Republicans could reach out to minority voters (and presumably other Obama supporters) if they treat the president with respect and refrain from hating President Obama’s health care law. But Republicans do not have to embrace the president’s health care law and there is more than one way to show respect for President Obama.

The president’s health care law is popular among nonwhite voters, but that does not have to be an obstacle provided that Republicans offer a comprehensible alternative that is a better deal. Latinos and African-Americans are much more likely than whites to lack health insurance coverage. John Logan pointed out that even middle-class and affluent Latinos and African-Americans are more likely than middle-class and affluent whites to have people within their social networks who are struggling. Artur Davis described this dynamic within the African-American community, but Davis’ observation has applicability to other populations of nonwhite voters:

If you go into the African-American church, you might have a pew full of doctors and lawyers and a pew behind them is many cases full of people on welfare. There is a social confluence in the African-American community of high-income and low-income people that creates a sensitivity toward poor people.

That means that the coverage expansion elements of the president’s health care law can, in the absence of a visible alternative, seem worth whatever costs are associated with the law, and any complaints about the law can come across like selfish carping from those who are already secure.

The answer is not to deemphasize opposition to Obama’s health care law. The answer is to combine criticisms of the law’s effects with alternative policies that will deal with people’s legitimate concerns. It is fine to point out that the president’s health care bill will raise health care costs for young people (a disproportionately nonwhite population). It is fine to argue that the President’s health care law discourages full-time hiring. These criticisms just need to be coupled with a plan that can offer coverage to the uninsured, and a better deal for young people at a lower cost to the government.

Bouie is right that Republicans who are seeking a wide audience should be respectful to Obama. One path open for Republicans is to adapt Ronald Reagan’s tactics in talking about Franklin Delano Roosevelt. Reagan was trying to win over FDR-loving working-class Democrats. Reagan would quote FDR in support of cutting government spending. It did not matter that FDR might have disagreed with Reagan on price controls or the top marginal income tax rate. Sometimes it is enough just to show that you share some values with the other party’s supporters, and that voting for you does not mean throwing away a lifetime of commitments.

Whenever possible, Republicans should try to use Obama’s rhetoric to their own purposes. In his First Inaugural, President Obama said:

Our journey has never been one of short-cuts or settling for less. It has not been the path for the faint-hearted”for those who prefer leisure over work, or seek only the pleasures of riches and fame. Rather, it has been the risk-takers, the doers, the makers of things”some celebrated but more often men and women obscure in their labor, who have carried us up the long, rugged path towards prosperity and freedom.

It is great to celebrate the “doers” and especially those who do uncelebrated labor, but also to mention how a Republican agenda would make it easier for those doers to find jobs, make it easier for them to keep their health insurance if they are changing jobs, and make sure they can maintain coverage if they have to make do with part-time work. Republicans could use Obama’s own words against Obama’s own party by supporting changes to the tax code that would reward both the work of middle-class working parents and the risk-takers of business.

That does not mean that Republicans can beat Obama’s party primaril y by using Obama’s words. FDR was dead when Reagan snatched his body for the Republicans, and Obama is likely to be with us for many decades. Republicans will still need to construct an agenda that speaks to the priorities of the struggling middle-class. But the point is not to prove that the Republicans are more like Obama than the Democrats. The point is to show the persuadable fraction of Obama voters that you understand that Obama spoke to their legitimate concerns even while explaining why Republican policies are better. Republicans need to remind these voters that they can switch parties without having to abandon all of their values.

Pete Spiliakos writes for Postmodern Conservative . His previous “On the Square” columns can be found here . Image via Wikimedia Commons.