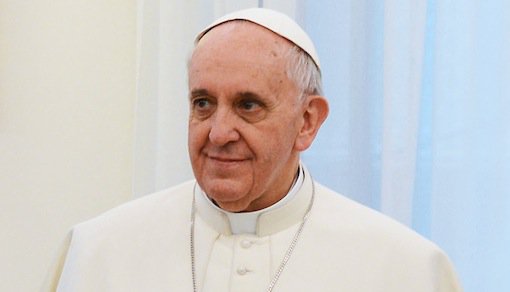 As the United States considers intervening militarily in Syria, it feels like déj vu. You have a megalomaniac in the Middle East who stands accused of biological weapons-based atrocities against his own citizens and the international community considering a response. On cue, religious leaders urge governments to negotiate a peace with the dictator”anything but war.

When Pope Francis met King Abdullah II of Jordan recently, it was more of the same. The Vatican press office reported that the two men discussed peace in the region, especially concerning Syria where “it was reaffirmed that the path of dialogue and negotiation . . . is the only option to put an end to the conflict and to the violence.”

The pontiff announced a day of fasting and prayer for peace in Syria, declaring , “Never has the use of violence brought peace in its wake. War begets war, violence begets violence.” Francis argued that “a peace based on dialogue and negotiation” is the “only way.” The pope then took to Twitter on Labor Day to repeat Paul VI’s warning, “War never again! Never again war!” Francis even wrote to President Vladimir Putin urging him to convince the G20 leaders meeting in St. Petersburg to “lay aside the futile pursuit of a military solution.”

Francis’s #prayforpeace day brought more categorical condemnations of war: “Violence and war lead only to death,” the pontiff exclaimed , “they speak of death!”

The pope must know that dialogue is not the “only” solution to the Syrian conflict. It would be a good thing if the pope would acknowledge the just war tradition while making his impassioned pleas for peace. Catholics believe in peace, but they’re not Mennonites. First Things editor R.R. Reno has consistently argued against intervening in Syria, but I believe a classical reading of the just war tradition renders robust intervention in Syria a morally desirable act of charity.

In these pages, papal biographer and theologian George Weigel rejects the notion that any thinking about just war ought to begin with a “presumption against the use of force,” as it seems Pope Francis has done. This faulty starting point “ends up conflating the ideas of ‘violence’ and ‘war.’ The net result is that warfare is stripped of its distinctive moral texture.”

Saints Augustine and Thomas Aquinas begin thinking about just war with a presumption that governments have a duty of charity to protect those for whose security they are responsible. Indeed, public authorities are morally obligated to defend their citizens against aggressors. Further, both theologians argued that a just cause can be “one that avenges wrongs, when a nation or state has to be punished, for refusing to make amends for the wrongs inflicted by its subjects, or to restore what it has seized unjustly.”

The U.S. government argues that Bashar al-Assad deserves to be punished for indiscriminately murdering and gassing thousands of his own people. Yet a proposed “shot across the bow,” a strike “limited in duration and scope,” as President Obama has repeatedly guaranteed, is not likely to succeed. A just cause must have probability of success and if the intent is to “deter” Assad and other rogues from using chemical weapons, lobbing a few cruise missiles won’t accomplish such a goal. Assad will probably have to be deposed in order to deter future bad actors”something Obama doesn’t dare undertake.

But, the President should pursue regime change because leaving Assad in power threatens our strategic national security. Obama’s inaction emboldens the mullahs in Iran. Likewise, an “unbelievably small” strike, as Secretary John Kerry recently described it, would only encourage them to march faster toward a nuclear weapon.

Assad must go, as Obama has said for over two years, but it is especially imperative that the U.S. ensure no one worse takes his place. If Assad can countenance deploying chemical agents on his own people, what do you suspect would happen if jihadists in Syria obtained those materials? There are still friendly forces in Syria the U.S. should aid. In fact, as Elizabeth O’Bagy wrote in the Wall Street Journal , “Moderate opposition groups make up the majority of actual fighting forces,” but they won’t be there for long without help. Obama must act now: Our security interests demand it, and Christians in Syria deserve it.

Back in Rome, Vatican officials are urging caution and citing the “last resort” criterion of the just war tradition. War must be a last resort, they say, after all non-military means”U.N. resolutions, economic sanctions, and yes, diplomatic pressure”have been exhausted. But, as Weigel has asked , “Can we not say that last resort has been satisfied in those cases when a rogue state has made plain, by its conduct, that it holds international law in contempt and that no diplomatic solution to the threat it poses is likely, and when it can be demonstrated that the threat the rogue state poses is intensifying?”

As Augustine reminds us in his City of God , dialogue is sometimes a fool’s errand and war is necessary simply because man is fallen: “As if he would not all the rather lament the necessity of just wars, if he remembers that he is a man; for if they were not just he would not wage them, and would therefore be delivered from all wars.”

Evil will always exist in the world. The kind of simplistic peace that it seems Pope Francis is praying for is dangerously naïve. Weigel points us to an admittedly “humbler sort of peace,” what Augustine called a “tranquility of order.” This “peace-as-order” can only be achieved when public authorities defend the security of innocents and punish those who threaten it.

Cardinal Ratzinger, the future and once pope, wrote in 2004 that it was ultimately OK to “be at odds” with the Bishop of Rome over the decision to wage war. Thank God for that.