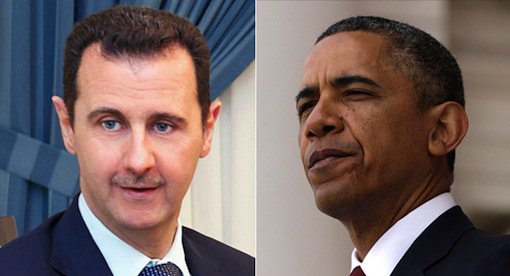 With summer becoming cool enough to warrant a shawl or sweater, my task this weekend was to clean the pool before closing. Thus occupied, I encountered Barack and Bashar”two frogs dwelling in the deep end and refusing to budge from their positions as I worked. Moving the vacuum head carefully, I would try to gently nudge the creatures away, but they would take turns launching themselves at the suction head. At one point, as I tilted the pole, lifting up just enough to capture a leaf, one of the frogs”I believe it was Barack”dared too deeply and then just barely managed to pull himself away from the vortex of the vacuum current, saving himself from dismemberment and (perhaps) entrapment in an inescapable line.

As I circulated between these amphibian metaphors, my thoughts turned, again and again, around the questions of Syria and whether America”in response to a chemical attack that killed an estimated 1400 civilians, including 400 children”should launch a “precise” airstrike against the regime of Bashar al-Assad.

There are no good options, or easy answers, to the Syrian problem. Assad may be a fiend, but even the president admits that he poses no imminent threat to the United States, which is one reason Obama has given for seeking the approval of Congress before he orders a punitive three-day air strike meant, mostly, to signal to Assad that the use of chemical weapons in war will not be tolerated.

It all sounds rather straightforward: One crosses a line, one pays a price. But there is a reason why almost 90 percent of the nation opposes airstrikes against Syria. That we are war-weary goes without saying, but in Syria we lack even a clear objective. Is this a mere shot across the bow? Are we going to be targeting specific armaments?

While speaking “off script” in 2012, Obama drew a red line around the use of chemical weapons. Now he is being challenged to do something or risk becoming a discredited irrelevancy both at home and abroad. It is a point that cannot go unconsidered. Can we as a nation risk allowing the American President to be regarded as feckless, reckless, and rash with words he is unable to back up? At this writing, the headlines are chaotic and confused, and the administration seems uncertain about what it wants or needs to do, but confident that some action”perhaps “unbelievably small” action, according to the Secretary of State”must be taken, by someone, and pretty soon . . . or maybe later.

What an awful position Obama has put the country in. If we do nothing, we present ourselves as toothless and give Assad (and other nefarious players) tacit permission to use chemical weapons with seeming impunity. If we do something, but try to keep it small we risk seeming like a nation of Herods. He, recall, made a rash promise to Salome and then became willing to serve up a measure of collateral damage (John the Baptist’s head, to be precise) for the sake of saving face.

Some argue that if we must back-up Obama’s words with military might rather than sanctions, then we had best go big, or not go at all: Change the regime, free the put-upon people of Syria and otherwise embrace the Bush-era program of nation-building in the Middle East. That would require a coalition built among allies the president has seldom deferred to and the co-operation of a congress he has refused to cultivate. Above all, the American people”already suspicious of our potential allies among the Syrian rebels”would have to be willing to support it.

I don’t pretend to know what would be the best course of action. The idea of launching missiles at targets possibly inhabited by civilians, all for the sake of maintaining political credibility”foreign or domestic”is repellent. Yet some kind of action may have to happen, one with different goals and better justifications”because mankind is fallen and real peace eludes us. Pope Francis, like his predecessors, suggests we cannot coax it into our midst through war, but we do keep trying.

What thought-provoking, prayer-provoking days are before us this week, as the president seeks to persuade the nation into “not-war” and plans a vote in Congress on September 11. The religious calendars and their readings seem eerily loaded, too. During last Sunday’s Gospel reading, Jesus asked if Kings waging war did not ascertain the risk and send forth diplomats; in the Liturgy of the Hours, the Office of Readings is deep into the prophet Jeremiah, “They have treated lightly the injury to my people: ‘Peace, peace!’ they say, though there is no peace.” Yom Kippur, the Day of Atonement for Jews throughout the world, is this Friday, September 13. On the Catholic calendar the 14th is the Exaltation of the Cross.

Barack Obama and Bashar al-Assad are swimming the deep waters. This weekend I captured their froggy counterparts and released them in a nearby pond. I have no particular fondness for frogs, but I would rather err on the side of life than death. All of the options before America seem like errors waiting to happen. Is it reckless of me to pray that if we must err, we err on the side of life?