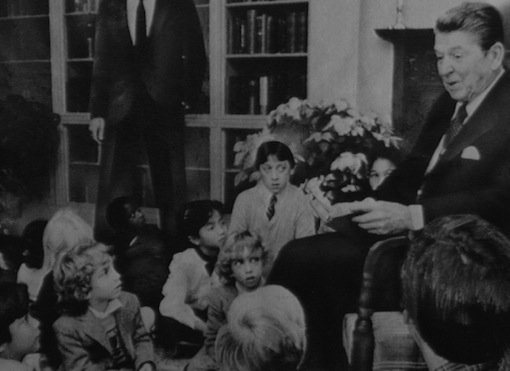 The liberal journalist Peter Beinart and the conservative journalist Andrew Ferguson have both picked up on Ted Cruz’s “children of Reagan” framing for a rising group of young conservative Republicans like Mike Lee, Rand Paul and, of course, Ted Cruz himself.

The irony here is that Ronald Reagan did not go around talking about the “children of Robert Taft” or the “children of Calvin Coolidge” (though Reagan was known to say nice things about Coolidge from time to time). When he talks like this, Cruz sounds less like Reagan than like nostalgic 1980s liberal Democrats who were always looking for the next FDR to banish Reagan and set the political universe back to its proper alignment. The best of those nostalgic speeches (like Mario Cuomo’s at the 1984 Democratic National Convention) got big cheers from committed liberals, but it was Reagan who won young voters by huge margins that year.

Reagan was able to speak to committed conservative audiences, but he had the much rarer talent to speak to people who did not know they agreed with him on some issues and who had cultural reasons to mistrust him. These were unionized FDR-loving Democrats for whom liberalism meant a secure retirement and for whom Republicans meant being left alone to face the terrors of the Depression. He was able to find a common language and a common agenda with those FDR Democrats who became Reagan Democrats. How can the so-called children of Reagan do the same?

All of this points to a potential Republican policy agenda to appeal to a wider (though not-quite-majority) fraction of younger voters even if no minds are changed on policy. Republicans can and should support incremental restrictions on late-term abortion that divide the vast majority of the public (including young voters) from the pro-abortion extremism of the national Democratic Party. Republicans can and should support immigration reform that combines employment verification up-front, with a path to citizenship for illegal immigrants who have longstanding ties to the United States and with a politically popular move to favor high-skill workers in future immigration. Republicans should support family-friendly tax reform that cuts taxes on working families (and especially people who are trying to start families) while increasing the revenue gotten from high-earners by cutting deductions and dropping the top marginal tax rate from 39.9 percent to 35 percent.

But no policy agenda”no matter how much it appeals to the prior commitments of persuadable young voters”will suffice. Sixty percent of a young voter electorate that narrowly favored banning most abortions voted for a presidential candidate that voted against extending legal protections to newborn children who had survived abortions and then lied about his vote. Even though 49 percent of young voters favored an enforcement-first strategy, 60 percent voted for the candidate of amnesty-first and enforcement-maybe never. Obama even outperformed support for tax increases on the rich by six points. Obama managed to win over young voters who disagreed with him on major issues.

This represents a failure, not only of Obama’s Republican opponents but of the right generally to communicate with large swaths of young voters. How many young voters knew of Obama’s vote on the Illinois Born Alive Infant Protection Act? One-in-ten would be an optimistic estimate. It doesn’t matter if the Democratic position is extreme or that the Republican position is closer to the opinion of the median voter if that voter never really hears a critical perspective on the Democratic position or a sympathetic portrayal of the Republican position. In the 2012 election, Obama’s abortion extremism was invisible and the Republican abortion position was defined by Todd Akin.

I recently had a conversation with an acquaintance and I asked them what Romney was for. This person was stuck and finally said that Romney was for cutting Social Security and for the elite. For all the hundreds of millions of dollars spent by the Romney and the right-leaning Super PACs, many young people only hear conservative ideas explained (or merely condemned) by left-of-center politicians, journalists or entertainers. Often, when young people do see conservatives in their own words, it is only when those words are exceptionally embarrassing. This left-of-center socializing is constant, but right-of center political advertizing is an election year phenomenon. Those right-of-center ads often seem calculated to be unintelligible or irritating to people who don’t already have a strongly conservative political identity. Whatever else the persuadable young voter wants to see, it probably is not affluent old white people complaining about how Obama is taxing and regulating them too much.

It took Reagan time to figure out the priorities of voters. It takes even longer to explain. How do you explain an agenda to people who lack context and who have been told a hundred different ways that you are the enemy? It takes time. It can’t just happen during elections. It has to be plain words and clear explanations of who will benefit and how. It will take more than thirty seconds to get any meaningful point across. The speech that launched Reagan’s political career was a thirty minute paid advertisement. It doesn’t have to be thirty minutes, but it has to be long enough to make a cogent and relevant argument to people who are not already inclined to vote for a conservative candidate, and it has to be on media that is consumed by young people who do not identify as conservative. If conservatives can produce a relevant agenda and learn to talk to people who don’t consume conservative media, liberals like Peter Beinart might be in for an unpleasant surprise. But the children of Reagan will have to repeat the Gipper’s feat of explaining a center-right populism to people who think that Republicans are exclusively the party of a selfish elite.

Pete Spiliakos writes for the First Things website. His previous “On the Square” columns can be found here .