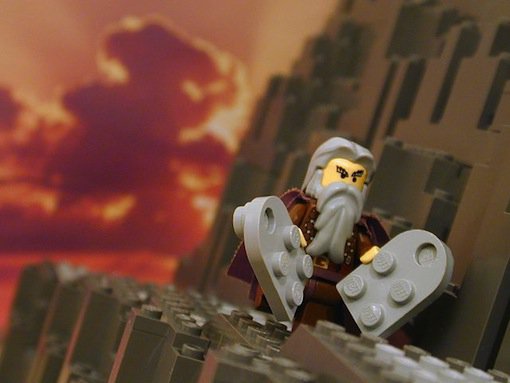 In these pages recently Stephen Webb suggested that the apostle Paul had stage fright . This would be remarkable, given his history of travelling throughout the Roman Empire speaking in many dangerous situations. But any reader of the Bible knows it is full of remarkable ironies. Such as the probability that Moses, arguably the greatest leader of Israel, was a stutterer.

When God called Moses to lead his people out of slavery in Egypt, Moses balked.

“I am not eloquent,” Moses told God at the burning bush. “I never have been. So I think you have asked the wrong man. For you see, I am heavy of mouth and heavy of tongue ” (Exod. 4:10, my translation).

Those last two phrases” heavy of mouth and heavy of tongue ”are a literal translation of the Hebrew. Most commentators have taken them to refer to stuttering. But some of the rabbis, who wrote about this story for centuries in the Mishna and Talmud , didn’t think so. The eleventh-century rabbi Abraham Ibn Izra thought Moses had a speech impediment, but not stuttering. The rabbi wrote that Moses could not produce all the normal sounds with his tongue and lips.

Two centuries later rabbi Bahye ben Asher got more specific: Moses was unable to pronounce the “z,” “s,” “sh,” and “ts” sounds. More interestingly, he explained why. Moses was a beautiful boy (the Bible says he was “fine/beautiful” in Exod. 2:2), and one time reached for Pharaoh’s crown when the two were together. Pharaoh’s counselors thought that was a bad sign, and advised the king to kill the boy. Others suggested a test. So they brought a golden bowl and bright glowing coals, to see which he would try to touch. According to the rabbi, an angel guided Moses’ hand to the coals, to show Pharaoh that this boy was not a threat. The boy Moses then stuck his scorched fingers in his mouth, which damaged his tongue.

Other Jewish interpreters thought the Hebrew phrase “heavy of tongue and mouth” meant that Moses’ speech was just fine, in fact eloquent. Some said it meant he spoke slowly and carefully, without the glibness characteristic of frivolous persons. A first-century Aramaic translator said the Hebrew word for “heavy” really meant “deep,” so that Moses was profound in his speech. Another rabbinic interpreter said that Moses was not tongue-tied but humble, recognizing that his brother Aaron was a better speaker.

Still others have thought that Moses’ problem was linguistic. According to Sigmund Freud, Moses was Egyptian and could not speak Hebrew. Other historians have suggested that Moses knew both languages but spoke Hebrew with a heavy accent.

But the majority of commentators down through the ages have considered the fuller story and concluded that the text does indeed mean that Moses stuttered. The eleventh-century rabbi Rashi, the most popular of all Jewish biblical interpreters, insisted that Moses was a stutterer. He and others have pointed to the story about Moses speaking to the two “Hebrews” who were fighting, and engaging one of them in a conversation (Exodus 2: 11-14), as proof that Moses knew Hebrew and could be understood by his fellow Jews.

The nineteenth-century rabbi Samson Raphael Hirsch explained that another passage in the Exodus story describes Moses as “uncircumcised of lips,” and that the word for “circumcised” here means “unpliant” or “without control over the faculty denoted.” In this case, the faculty is “lips.” Hirsch, who was a renowned specialist in the Hebrew language, said that this meant Moses did not have control over his lips, which is exactly how stutterers feel about their lips.

A contemporary interpreter, Samuel Davidkin, says that another passage in the story provides still more evidence. Exodus 6:9 says that when Moses spoke to the Israelites they did not listen to him “because of shortness of breath and hard work.” Most interpreters have thought this referred to the overworked Jewish slaves, but it may refer to Moses himself. For a stutterer, speaking a long message (and in this case it was long) before a crowd can be exhausting, and often means the stutterer runs out of air repeatedly while he speaks. Davidkin thinks the crowd might have run out of patience with Moses as they watched him struggling to get words out of his mouth.

Most Jews have accepted this basic line of interpretation”that Moses was a stutterer. One piece of evidence for this acceptance is a modern joke whose impetus was the puzzling fact that the Jews got the only land in the Middle East without oil (though more recently natural gas reserves have been discovered off the coast of Israel). According to the joke, God offered Moses his pick of lands. Moses somehow knew that Canada possesses an enormous variety of natural resources, including oil, and so tried to get the word out. But when he stammered, “Can-Can-Can . . . ” God thought he was saying “Canaan,” and rewarded him with what we now know as Israel.

In a recent issue of the journal Neurological Science , three medical researchers have suggested even more evidence. They say that the Moses story betrays three tell-tale symptoms of stuttering”fear, finding someone else to speak as a spokesman, and the pattern of negation/hesitation/avoidance. More intriguingly, they point out that Moses’ father married his own father’s sister (Ex. 6:20), and that there is a higher prevalence of speech disorders among today’s Israeli children born from consanguineous (same blood) marriages. They also find that stuttering today is more prevalent among bi-linguals (those who speak two languages), and that Moses probably had to master three languages”Hebrew (taught by his parents in his first years), Egyptian (learned during his thirty-plus years as a foster son of Pharaoh’s daughter in the royal household), and Midianite (learned during his forty years as a shepherd and husband to the daughter of the priest of Midian).

These are of course circumstantial lines of evidence, not direct proof. But they are suggestive and confirming”that what most interpreters over the millennia have concluded is supported by patterns we see among stutterers today. The Moses of the Bible, from evidence we see in the biblical story, seems to have been a stutterer.

Gerald R. McDermott is the Jordan-Trexler Professor of Religion at Roanoke College. He is writing a book on famous stutterers.