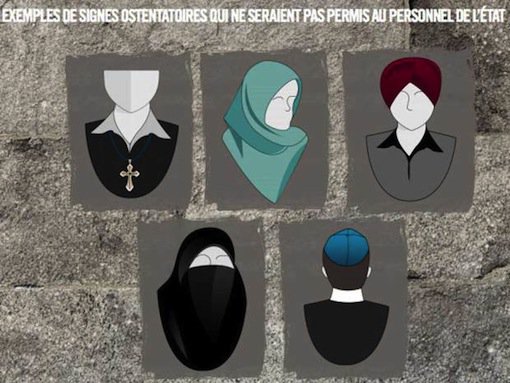 The original lyrics of what eventually became Canada’s national anthem were composed by Sir Adolphe Basile-Routhier in 1880. Judge Routhier was a devout Catholic, of strong ultramontanist convictions, and the lyrics he wrote (retained in Quebec but much modified in English Canada) run as follows:

There is no official translation, but perhaps this will do:

From which it can be seen that a.d. 1880 was a very long time ago. In 2013 c.e. , things are different. The Hon. Bernard Drainville, Minister responsible for Democratic Institutions and Active Citizenship, has finally announced the government’s intention to produce a Charter of Quebec Values, with attendant alterations to the Quebec Charter of Rights and Freedoms. Quebec is to be declared a secular society, with a secular state. And wherever that state appears, its secularity must also be made to appear.

The true North, strong and free, is all abuzz with talk of this and with debate over its implications for religious freedom. “Quebec draws its line” was the headline in The Globe and Mail the next day, with the entire front page devoted to the matter. The immediate focus of the controversy is the banning of “conspicuous” religious symbols, including the kippah, from any civil servant or public employee, even in the health and education sectors. Here is an excerpt from the English portion of the Minister’s announcement:

The state has no place interfering in the moral and religious beliefs of Quebecers. The state must be neutral. We therefore propose to affirm in the Quebec Charter of Human Rights and Freedoms the state’s independence from religions, to ensure there is no bias in favour of one confession or another. For this religious neutrality to take shape in public institutions, it must also show in the people who work for them. We therefore propose to establish a duty of religious neutrality and reserve among state personnel. This duty would mean that state employees could not wear conspicuous religious symbols while they work.

Actually this “duty of religious neutrality and reserve” has already been imposed in the education sector, whether public or private, through the Ethics and Religious Culture curriculum: a mandatory program that comes complete with pedagogical instructions forbidding it to be taught from any perspective but that of the neutral state. This duty is currently being tested before the Supreme Court of Canada in the Loyola case. But now it is to be tested also in the court of public opinion through the banning of religious symbols across all public sectors. Even the silent witness of a kippah or a turban or a hijab will be forbidden while performing any service to the state.

Critics have noted an inconsistency; viz., the government’s refusal to remove the very conspicuous crucifix from the wall of the legislature. This inconsistency is related, they say, to polls among ordinary Quebecers suggesting that its removal would be unpopular; whereas the proposed Charter appears to have considerable public support, outside of Montreal at least. The Government (currently a minority government with an election in the offing) is thus accused, not only of trampling on religious freedom and personal liberties, but of cynical political posturing.

Perhaps. But the crucifix in the legislature puts me in mind of another stanza of the anthem, and of these two lines in particular, for such are the sentiments bespoken by its presence there:

Show us how to be a people of brothers,
Under the yoke of faith.

With all due respect to John Courtney Murray and other modern Catholic thinkers who have tried to say that it can, not to mention the secularist thinkers on which the minister is doubtless leaning, the state cannot avoid aligning itself in at least some respects with the theological judgments that prevail in the society it serves.

The problem is complex but the point, for present purposes, can be made very simply. If we say with the minister that the state must be neutral, and mean thereby what the minister appears to mean—not merely that the state must be even-handed in its treatment of citizens, whatever their religion, but that the state itself must eschew every theological idea or religious association—we are also saying that the state is a sphere in which God must not be acknowledged as God. And that of course is a way of saying that, whatever deity there might be, it lacks any legitimate claim over the state. Which is a theological statement.

Just here we might want to ask after the warrant for that statement. We might even want to ask whether Quebecers on the whole are sure of its veracity. Why exactly do they not want that crucifix taken down from the wall of the legislature? Why have they not jettisoned their anthem? What kind of deity is this anyway, that takes no interest in the state or has no authority over it? Or do Quebecers no longer believe in a deity at all? But in that case they and their state are not “neutral” but agnostic or even atheistic.

It is well known that a couple of generations ago, Quebecers began to lose their faith in God, the faith that was so strong in Judge Routhier. In consequence they began also to lose hope; and soon, like so many other western peoples, they stopped reproducing. Now, it seems, they are losing their charity as well. Frightened by the influx—the altogether inevitable influx—of people of foreign habits and foreign faiths, they have demanded, first, linguistic conformity and now conformity of appearance too. This new conformity is credal conformity. It is conformity of faith in their so-called neutral state.

I hasten to add that it is not, on my view, uncharitable to ask that public business be conducted chiefly in French, though it is a vain thing indeed to labour so hard to preserve a language while refusing to preserve the very people whose language it is. It is uncharitable, however, to impose the yoke of neutrality or the duty of religious reserve. After all, one can learn to speak French without abandoning one’s native tongue. But one cannot learn to hide one’s belief in God without abandoning one’s belief that, even at work, one owes allegiance to God. Otherwise put: The state can encourage one’s use of French without discouraging the use of other tongues as well; but it cannot impose a “duty of religious neutrality and reserve” without depriving one of freedom to fulfill the duty of religious reverence.

This lack of charity, I repeat, is born of fear. And never yet did fear produce un peuple de frères. Neither the minister, nor the government he represents, can guard the home or preserve the heritage of Quebecers in this way. Their valeur, steeled by faith in the secular state, is altogether in vain. A mere twenty or thirty years from now, 2013 c.e. will also seem a very long time ago.

Douglas Farrow is professor of Christian Thought and Kennedy Smith Chair in Catholic Studies at McGill University and a member of First Things ’ advisory council.